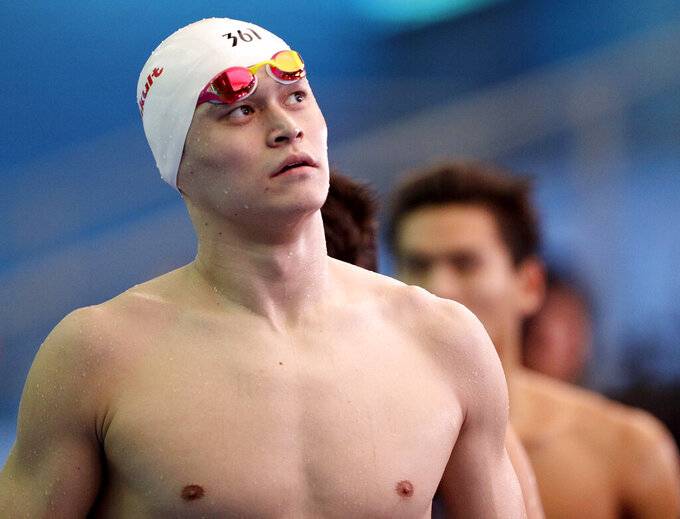 GENEVA (AP) — The Swiss supreme court explained Friday why it has ordered a retrial for Olympic swimming champion Sun Yang in a doping case, citing anti-China bias related to killing dogs for food by one of the judges in the case.

Hostile social media posts on Twitter by Court of Arbitration for Sport judge Franco Frattini persuaded the federal court he should not have presided over banning the Chinese swimmer.

Federal judges last month sent the case back for a second hearing at CAS, where Sun was previously banned for eight years for violating anti-doping protocols.

Frattini, a former Italian foreign minister, has been barred from the retrial, which is likely to decide if Sun can compete at this year's delayed Tokyo Olympics.

“In his tweets, the arbitrator (Frattini) castigates a Chinese practice of dog slaughter and denounces the consumption of this meat at a local festival in China,” the Swiss court said in a statement. “Some expressions refer to the skin color of certain Chinese people he targets."

Federal judges said “the doubts as to the impartiality of the arbitrator were objectively justified,” but they did not consider the merits of the evidence in the Yang case.

Frattini chaired a CAS panel of three judges at a hearing in November 2019 that unanimously upheld the World Anti-Doping Agency’s appeal for Sun to be banned.

Previously, a tribunal appointed by swimming body FINA only warned Sun about his conduct during a home visit in 2018 by sample collection officials that became hostile.

After CAS published its verdict last February, Sun's lawyers appealed to the Swiss supreme court. A second appeal was filed after online reports last May about Frattini’s social media posts.

These were “tweets made by the arbitrator in 2018 and 2019 in connection with the protection of animals,” the federal court said.

“In principle, an arbitrator can also defend his convictions on social networks, but with the restraint required of judges,” the federal court said. “The choice of words and the repeated use of violent expressions is problematic in the specific case.”

Frattini was appointed by CAS in early 2019 to chair the appeal, while lawyers for WADA and Sun each got to choose one judge. Both were based in London.

The 10-hour hearing in Montreux, Switzerland, was a rare CAS case held in open court, at the three-time Olympic champion’s request, and streamed live online.

The hearing was marred with translation problems that complicated questioning about why Sun did not comply with sample collectors whose credentials were questioned.

Evidence included Sun using his mobile phone light in the darkness to help a security guard smash the casing holding a vial of his blood. The guard was instructed by Sun’s mother and used a hammer to break the case and ensure the blood could not be used for anti-doping tests.

The retrial at CAS faces a tight schedule to resolve the case before the Tokyo Olympics.

The 29-year-old Sun is the world champion in the men’s 400-meter freestyle, which is among the first Olympic events scheduled to begin competition on July 24.