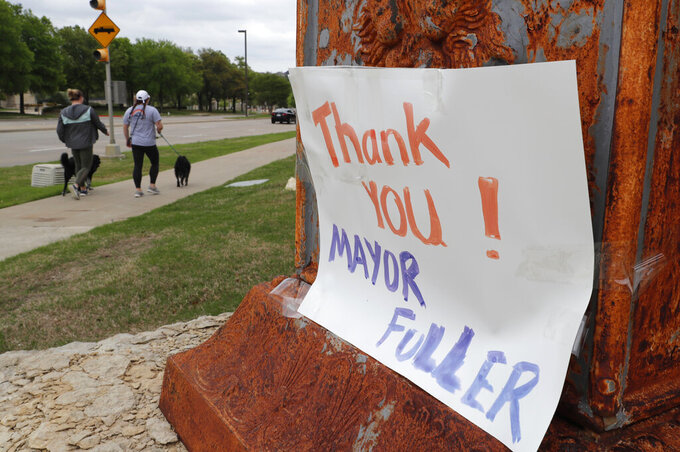 CORRECTS TO REMOVE INCORRECT POPULATION FIGURE - A sign of appreciation for McKinney Mayor George Fuller is posted near his office in McKinney, Texas, Thursday, April 2, 2020. Even though he conflicted with county officials, the suburban Dallas mayor defended his order that residents shelter at home to combat the spread of the coronavirus. Then he learned that his 19-year-old daughter had tested positive for COVID-19. Fuller said even as he worked to keep the city's residents safe from the virus, it seemed impossible that someone in his own family could be infected. (AP Photo/LM Otero) 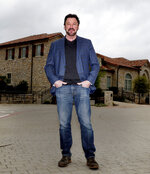 DALLAS (AP) — As a suburban Dallas mayor defended his order that residents shelter at home to combat the spread of the coronavirus, he learned that his 19-year-old daughter had tested positive for COVID-19.

McKinney Mayor George Fuller said even as he worked to keep the city's 200,000 residents safe from the virus, it seemed impossible that someone in his own family could be infected.

Initially, Fuller thought his daughter was fighting the flu, but with each passing day she got sicker and sicker. By the time she developed a burning sensation when she breathed, along with fever and a dry cough, he knew it was serious.

“The first several days, it was: ‘No honey, you just have the flu. Relax,’” he said Wednesday.

Her test results came back Sunday.

“It's been surreal," Fuller said.

Fuller issued the shelter-at-home order several days before his daughter tested positive, and even earlier, before she had any symptoms, had announced restaurants would only be open for takeout or delivery.

He said his decisions were made based on science and data, and that the majority of community feedback has been positive. But not all of his constituents agreed.

McKinney real estate agent Derek Baker sued Fuller over the executive order, saying it was too restrictive. Collin County Judge Chris Hill, the highest elected official for the fast-growing county that includes McKinney, had declared that while all residents should stay home except for essential activities, “all businesses, jobs and workers are essential.”

So Fuller issued his city's order in line with those issued in larger cities such as Dallas, Houston and San Antonio. He defined which businesses, such as grocery stores, could remain open.

McKinney resident Amy Bennett was among those appreciative of Fuller's stricter stand. “I’m really, really grateful for the way that he’s stepped out and been bold about making decisions,” she said.

Baker though alleged McKinney's guidance shouldn't conflict with that issued for Collin County, and said in an interview that his lawsuit was about “liberty for the people that (Fuller) basically fired with his edict.”

Texans had seen a patchwork of directives from the state, counties and cities until Tuesday, when Gov. Greg Abbott issued what amounts to a statewide stay-at-home order. Hill then rescinded his order declaring all business essential and, the same day, a local judge tossed Baker's request to halt Fuller's restrictions.

Fuller's daughter, who lives in Dallas and attends school there, had improved enough by Tuesday that she smiled instead of cried during their FaceTime call.

For most people, COVID-19 causes mild or moderate symptoms, such as fever and cough that clear up in two to three weeks. For some, especially older adults and people with existing health problems, it can cause more severe illness, including pneumonia and death. The majority of people recover.

Baker and Fuller have talked. Baker said he won't pursue the lawsuit, even though he still believes there's a way to “let people work in a safe manner.”