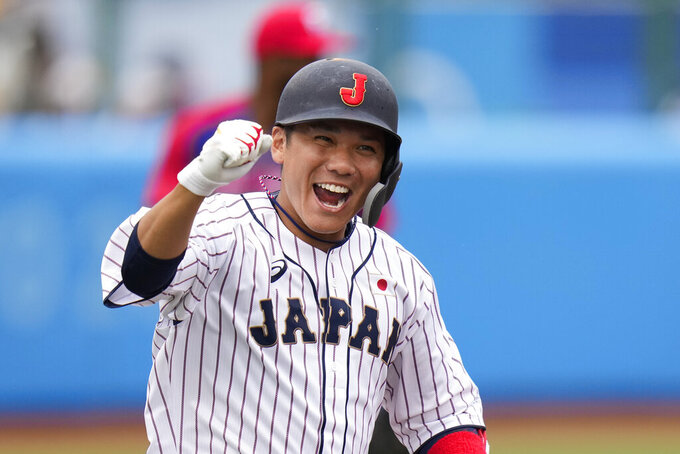 FUKUSHIMA, Japan (AP) — At risk of an embarrassing defeat to start the Olympic tournament, the Japanese baseball team turned things around with its signature fundamentals.

Fans of Major League Baseball, be ready: bunting is already big at the Tokyo Olympics.

Kai Takuya drove in the tying run with a perfectly placed squeeze bunt, Hayato Sakamoto followed with a game-ending, bases-loaded single and the Japanese rallied from three runs down in the ninth inning to beat the Dominican Republic 4-3 in the Olympic baseball opener Wednesday.

The underdog Dominicans led 3-1 entering the ninth after starter Cristopher Mercedes dominated a lineup he knows well from his years in Nippon Professional Baseball. Outfielder Johan Mieses also threw out a runner at home in the eighth inning to preserve the lead.

Jairo Asencio (0-1) got the first out of the ninth, then forgot to cover first on Yuki Yanagita’s grounder to first baseman José Bautista, letting Yanagita reach for Japan’s fifth hit of the game.

"We needed to get some runs in there," Japan manager Astunori Inaba said through an interpreter.

Hardly the play baseball fans from the Western hemisphere might expect — the bunt has fallen out of favor there, but it remains a prized skill in Japan.

“This is something that happens a lot in baseball in Japan, and it’s something we were expecting might happen,” Dominican Republic manager Hector Borg said through a translator. “Unfortunately, we weren’t able to respond to it correctly.”

After Tetsuto Yamada singled to load the bases, Jhan Martinez replaced Asencio. Sakamoto, the 2019 Central League MVP, then drove a ball to the warning track in center to earn the hosts a walk-off victory.

“I'm very relieved to be able to have our first win today,” Sakamoto said through an interpreter. “I believe the first half of the match had a very heavy atmosphere and everybody was very nervous.”

The Japanese got it together in time to avoid a troubling upset.

The host nation is pursuing its first Olympic gold medal in baseball after the sport was restored to the Games for the first time since 2008. Few medals would mean more to the baseball-crazed country, and expectations are high.

While MLB players aren’t at the Tokyo Olympics, Japan’s professional league suspended its season to accommodate the Games. Inaba has many of his country’s best on the roster, including former Yankees starter Masahiro Tanaka, now with the Pacific League’s Rakuten Golden Eagles.

Inaba instead gave the ball to Orix Buffaloes ace Yoshinobu Yamamoto, a 22-year-old three-time All-Star in Japan who could have a stateside future. He delivered six scoreless innings, striking out seven with one walk, two hits and 88 pitches in his first high-profile international appearance.

Mercedes was every bit as good against a loaded lineup. The 27-year-old — in his fifth season with the Pacific League's Yomiuri Giants — cruised into the seventh leading 2-0. He struck out seven and walked one over six innings, no surprise to fans who have watched him go 5-1 with a 2.31 ERA for the Giants this year.

Borg sent Mercedes back out for the seventh with his pitch count at 96, but Mercedes was pulled after leadoff hits from Hideto Asamura and Yanagita.

Right-hander Luis Castillo allowed a fielder’s choice RBI groundout to Munetaka Murakami but preserved a 2-1 lead. Prized Seattle Mariners prospect Julio Rodríguez made a running catch in right field for the final out of the inning.

Mieses kept it that way with his bullet throw in the eighth. Yamada tried to score from second base on Mastaka Yoshida’s single, but Mieses’ strike allowed Valerio to tag Yamada on the shoulder as he slid toward the plate.

The Dominicans went ahead 2-0 on Charlie Valerio's double in the seventh against sidearming reliever Koyo Aoyogi and led 3-1 after Gustavo Nunez's ninth-inning RBI double off Hiroshima right-hander Ryoji Kuribayashi (1-0).

The opener was staged at a 14,300-seat stadium in the northern prefecture of Fukushima after the area was devastated by an earthquake in 2011. Organizers hoped to lure tourists and also host fans from the region, but like most venues at the Tokyo Games, no spectators were allowed.

“I'm really hoping our match today was able to give a motivational message to the people here,” Inaba said.

The rest of the tournament will be played at Yokohoma Stadium closer to Tokyo.

The Dominicans haven’t played in the Olympics since 1992, when they finished sixth out of eight teams. Despite a roster featuring former big league stars Bautista and Melky Cabrera, they were the last team to punch a Tokyo ticket by winning a qualifying tournament over Venezuela and the Netherlands in Mexico in June.

Japan made some late roster moves, including dropping Central League MVP Tomoyuki Sugano. The left-hander is expected to be pursued by major league teams during the offseason.