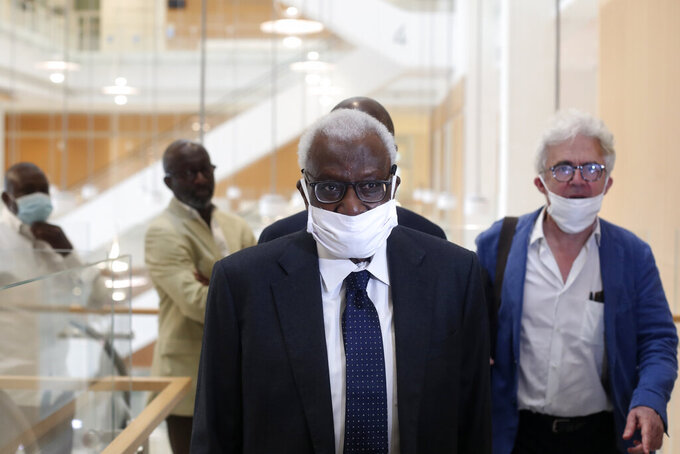 Former president of the IAAF (International Association of Athletics Federations) Lamine Diack arrives with his lawyer William Bourdon, right, at the Paris courthouse, Monday, June 8, 2020. A sweeping sports corruption trial opened Monday in Paris involving allegations of a massive doping cover-up that reached to the top of world track and field's governing body. Lamine Diack, 87, who served as president of the body for nearly 16 years, is among those accused of receiving money from Russian athletes to hide their suspected doping so they could compete at the Olympics in 2012 and other competitions. His son Papa Massata Diack is also charged in the case. (AP Photo/Thibault Camus)

PARIS (AP) — As Usain Bolt set the world ablaze, making athletics the hottest ticket at the Olympic Games, the sport was also being eaten from within.

That grim picture has emerged from a corruption trial in Paris that has shown how the thrilling era for track fans was poisoned behind the scenes by a father-son partnership at the top of the IAAF, the international governing body that organizes Olympic races and world championships.

Nine months before Bolt set the first of his sprint world records, then-IAAF President Lamine Diack signed an agreement in September 2007 to pay his own son $900 per day — later increased to $1,200 — for consultancy work. Armed with his father's name and influence as a titan of Olympic sports, Papa Massata Diack set to work negotiating lucrative sponsorship deals for the IAAF.

In the process, prosecutors allege, the Diacks got filthy rich, siphoning off revenue for themselves and lining bank accounts with hush-money allegedly extorted from athletes who coughed up six-figure sums to avoid being sanctioned for doping.

The Diacks contest the corruption, money laundering and breach of trust charges examined in six days of hearings. The trial highlighted governance problems that have plagued sports in their growth from what were once amateur pursuits into a global mega-industry short on effective oversight.

The Diacks' alleged malfeasance didn't merely bite giant chunks out of IAAF revenues and trash its reputation as a leader in fighting doping, causing losses the governing body now values at 41 million euros ($46 million). The court heard that athletes also were handicapped and hurt financially by having to compete against runners who should have been suspended for doping but instead benefitted from a crooked system dubbed “full protection,” paying hush-money to keep competing.

Dehiba's attorney, Florent Hauchecorne, described the trial as a milestone in ending the seeming impunity that long shielded sports administrators from criminal punishment.

“The problem is that sport has become an industry,” he said. “And in the background, there are the geopolitical interests of nations which, in the end, lead to the conclusion that the doping of athletes and helping athletes dope to win medals is no worse than employing secret services to intervene here and there.”

The trial showed how the Diacks lived large while athletes sweated for success. Lamine Diack jetted the world and rubbed shoulders with VIPs.

Prosecutor Arnaud de Laguiche said sports leaders like Diack "live like little emperors, they have their little courts and people court them.”

In 2011, then-President Dmitry Medvedev of Russia presented Diack with a friendship medal. Known to few at the time, Diack that year was starting to deal behind the scenes with the crisis that would irredeemably tarnish his nearly 16-year IAAF presidency: Rife doping in Russia.

With the Olympic Games of 2012 looming, Diack feared that punishing a large group of athletes together could hurt negotiations with a Russian sponsor, the court heard. Diack acknowledged he intervened to quietly slow down the sanctioning process, but denied knowledge of payoffs. Prosecutors allege the Diacks squeezed athletes for 3.45 million euros.

“It’s like one of those American films, where the old Mafiosi sit at the back of a restaurant eating spaghetti, making or breaking lives,” Daoud said. “Mr. Diack acted like an omnipotent patriarch."

In court, the 87-year-old Diack often provided inaudible and confusing testimony. He recalled details from his youth with clarity but repeatedly blanked when pressed on details of the case.

“I am starting to become an old nail,” he said.

One of his lawyers, Simon Ndiaye, said Diack feels it is “globally unfair” that he is answering for “a whole system, in which lots of people took part."

The most conspicuous absentee was his son, Papa Massata Diack, who lives in Senegal and didn't travel to Paris for the trial.

Prosecutors put Papa Massata Diack at the heart of the alleged racketeering of athletes and the creaming off of IAAF revenues. The son had expensive tastes: Investigators found he bought watches and other luxury goods worth 1.7 million euros from a store off the Champs-Elysees.

“He conducted himself like a thug," Lamine Diack said in court.

Now rebranded as World Athletics, the IAAF has turned over a new leaf under Sebastian Coe, the former middle-distance runner who has overseen reforms since he succeeded Diack as president in 2015.

But the risk of further damage looms: Diack is also under investigation in another French probe of bidding contests for the 2020 Olympics and other major competitions.

The verdicts are expected in coming months.