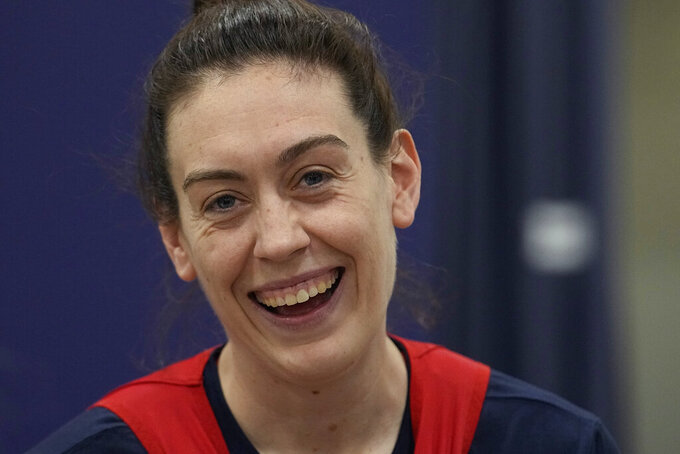 The U.S. women's basketball team will have a lot of new faces when the Americans play in the FIBA World Cup next month in Australia.

Gone to retirement are Sue Bird and Sylvia Fowles, who were key parts of the Americans' dominance over the last two decades of international competition. Diana Taurasi was not on the training camp roster, but told The Associated Press before she injured her quad that she was a “maybe” to compete in Sydney.

South Carolina's Aliyah Boston was the lone college player among the 29 invited to the USA Basketball training camp that will begin next month in Las Vegas. She helped South Carolina win its second national championship and was the AP Player of the Year.

The camp will be from Sept. 6-12 with an intrasquad game set for Sept. 10. The Americans will then travel to Australia to train before the World Cup begins.

Joining Boston are nine players from the Tokyo Olympics, including A'ja Wilson and Breanna Stewart. Players will report to camp at the conclusion of their WNBA seasons. The playoffs begin Wednesday and if the WNBA Finals goes five games it would end on Sept. 20 — right before the World Cup begins.

“That's the plan. The plan is to take care of business here, continue to play for Seattle as long as possible and then going to Australia for the worlds,” Stewart said. “We are hopping on a plane, that's what we are doing.”

The World Cup roster is due about 48 hours before the start of the tournament, which runs from Sept. 22-Oct. 1.

“Everything’s on the table,” said USA national team director Briana Weiss, who took over that role from longtime executive Carol Callan. “I think when we’re dealing with a tight timeframe like this, all options are available to you."

Ariel Atkins, Chelsea Gray and Jewel Loyd were also on the Tokyo Olympic team that won a seventh straight 5-on-5 gold medal. Kelsey Plum, Allisha Gray, Stefanie Dolson and Jackie Young were part of the gold medal-winning squad for the inaugural 3-on-3 competition in Tokyo. They are also part of the training camp roster.

“I am looking forward to welcoming this amazing group of athletes to a productive training camp as we prepare for the 2022 FIBA World Cup,” coach Cheryl Reeve said. “These athletes will report to camp having just completed their WNBA seasons and it says a lot about their competitive drive and commitment to USA Basketball that they will come to Las Vegas prepared to participate at the highest level.”

Elena Delle Donne and Angel McCoughtry also have Olympic and World Cup experience, winning gold at each. Both missed the Tokyo Games because of injuries and are on the U.S. camp roster. McCoughtry started the season with the Minnesota Lynx before having her contract bought out at the start of the season.