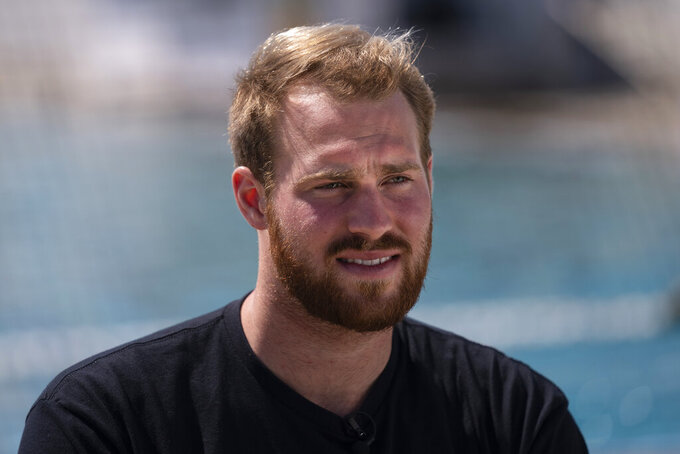 LOS ALAMITOS, Calif. (AP) — Marko Vavic was in Mexico when it happened. He had just flown to Cabo San Lucas to spend spring break with a group of friends.

When Vavic woke up, there were several text messages on his phone. That was how Operation Varsity Blues barreled into his life.

Vavic’s father, Jovan, who coached Southern California’s vaunted water polo programs to a combined 16 national championships, had been indicted in a college admissions bribery scandal that ensnared TV stars, businesspeople and athletic coaches across the U.S.

It was a massive earthquake at the center of American water polo in California.

“Everyone was texting me like, ‘Hey, what’s going on?' And I don't know what's going on,” Marko Vavic said. “Basically found out, I called my mom and my brother and sister and checked the internet. That's pretty much how I found out.”

Two years later, Jovan Vavic is awaiting a November trial after pleading not guilty to fraud and conspiracy charges, and Marko Vavic is pushing for a spot on the U.S. team for the Tokyo Olympics.

They barely talk about the legal cloud hovering over Jovan.

“We’re a family. We stick together,” Marko Vavic, 22, told The Associated Press in his first public comments about his father’s legal situation. “It’s not like, ‘Forget about me.’ We’re fighting through it together."

Jovan Vavic was in Hawaii with the Trojans' women's team when he was arrested on March 12, 2019. Reaction was swift to the federal investigation dubbed Operation Varsity Blues.

Jovan Vavic was fired by USC that same day. Fresh off winning the national title, Marko Vavic was told by the school he was ineligible to play pending an investigation into a possible infraction.

“I can't play college water polo, but other than that, it's been a little funky not having my dad around at school,” Marko Vavic said. “I mean, I grew up with him there. But other than that, it hasn't really affected me so much. Obviously it's a frustrating situation to have, and it's just taking forever to go through the process with court.”

Stephen Larson, one of Jovan Vavic’s attorneys, declined to make his client available for an interview. Larson said in an email that Vavic “is innocent of these convoluted charges,” and he is looking forward to being vindicated at trial.

According to a superseding indictment, filed in federal court in Boston in October 2019, Jovan Vavic is accused of accepting $250,000 in bribes in exchange for designating two prospective students as water polo recruits, facilitating their admission to USC. Prosecutors say neither student played the sport competitively.

The indictment also alleges that Rick Singer, the admissions consultant at the center of the scheme, made private school tuition payments for Vavic’s children in exchange for the coach’s commitment to designate Singer’s clients as recruits in the future.

The accusations have put Marko and his younger brother, Stefan, in a precarious position with USC. Marko is playing professionally for Roma Nuoto in Italy, but he is forgoing a salary in order to protect the possibility of returning to the Trojans. Stefan, 20, has yet to play for the school.

Marko said they are in contact with USC and have spoken with the NCAA, but basically nothing has changed since his father was first indicted.

Marko and Stefan share a page in the school’s most recent media guide and are listed on the roster on the USC website. Next season’s schedule likely will begin in September.

Asked about the brothers’ eligibility and when there might be a resolution, a spokeswoman for the school declined to comment, citing student privacy laws. An NCAA spokeswoman told the AP it “cannot comment on current, pending or potential investigations.”

Water polo has bonded the Vavic family for years. Jovan Vavic played professionally in his native Montenegro in the former Yugoslavia before moving to Southern California in 1984. Marko Vavic grew up going to his father's USC games, watching and playing around with Stefan.

Their older brother, Nikola, and sister, Monica, also played for the Trojans, with Nikola scoring 254 times on his way to four national championships, and Monica collecting a program-record 291 goals and winning the 2013 NCAA title.

Jovan Vavic was known for his hard-nosed approach with his players, and Marko Vavic said he benefited from his father's experience with his older siblings.

“He was really, really hard on me, but it definitely made me a better player. Definitely understood the difference between being a coach and being a dad.”

Marko Vavic scored 108 times over his first two seasons at USC, but the 6-foot-5 attacker is known more for his defensive ability. He has been playing on the right side with the national team, so he is working on shooting from a different position after spending much of his time on the left growing up.

“You know Jovan is a warrior and he’ll do everything to win for his team, for his program, and Marko has that line, that warrior line, never give up, which is great,” he said.

Asked if Marko has been weighed down at all by Jovan's legal situation, Udovicic said he is doing “more than fine.”

“If he’s my son, I would be proud of how he’s handling the situation,” he said. "It’s not easy. I understand that. It’s not easy at all. But he (finds) a way to motivate himself and I am seeing a good vibration from his side. Not just last couple months, I am seeing that a year and a half, three years.”

Even after everything that has happened, Marko wants to go back to USC. He wants to play again with his friends on the team, and he wants to win another NCAA title.

That's only the beginning. He wants to make multiple trips to the Olympics and play at the top level of water polo in Europe. He thinks he is only getting started.

“I have some big tournaments and games I want to win,” he said.