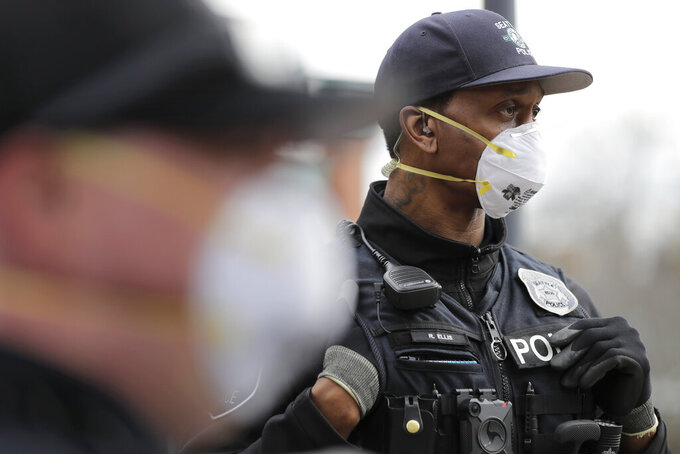 Seattle Police officer Rosell Ellis, right, wears an N95 mask as he listens to conversation during a routine call Thursday, April 2, 2020, in Seattle. As police and fire departments across the country face personnel shortages due to the spread of the new coronavirus, masks and other protective gear are being used to keep officers and firefighters still on the streets safe and healthy. (AP Photo/Ted S. Warren)

OLYMPIA, Wash. (AP) — Washington Gov. Jay Inslee on Thursday extended orders to keep non-essential businesses closed and most of the state’s more than 7 million residents home through May 4, saying social distancing measures must remain in place an additional month to minimize the spread of the coronavirus.

In recent days, Inslee had been signaling that his initial stay-at-home orders from March 23 — which were set to expire next week — would be extended. The new proclamation, announced during a news conference, extends the original order from two weeks to six weeks. Under previous actions taken by Inslee in response to the coronavirus outbreak, all bars, dine-in restaurants, entertainment and recreation facilities have been closed even longer, since March 17.

“We unfortunately have yet to see the full weight of this virus in our state,” he said. “This order is not only justified it is morally necessary.”

There have been about at least 262 COVID-19 deaths and more than 6,500 confirmed cases. For most people, the coronavirus causes mild or moderate symptoms, such as fever and cough that clear up in two to three weeks. For some, especially older adults and people with existing health problems, it can cause more severe illness, including pneumonia, or death.

Under the new order, all businesses other than those deemed essential — a long list that includes grocery stores, pharmacies, banks, and gas stations — will need to remain closed until May 5. Inslee said it was possible that the stay-at-home order could be extended once again, but said he hoped it would not have to be.

All public and private gatherings will still be prohibited and people will continue to be required to stay home unless they are pursuing an essential activity, like shopping for groceries, going to a doctor’s appointment, or going to work at an essential business. People can still go for walks, runs and bike rides outside if they maintain a six-foot distance from others.

Violation of the order is a gross misdemeanor, but the governor’s office has said the goal is education, not to arrest people. Earlier this week, the state released a website where people can report violations of non-essential businesses operating. Inslee said residents should not call 911 to report individuals or private group who are not following the proclamation, but should instead contact local law enforcement.

The news of businesses having to stay closed another month comes the same day the state's Employment Security Department said that a record number of people filed for unemployment benefits last week.

Inslee he understands said the impact on businesses and employees, and cited ongoing state and federal efforts that will offer some help, but said that the "fastest way to economic recovery is for a recovery of our health.”

“To save lives, to rescue Washington’s economy, we’ve got to preserve lives and defeat this virus,” he said.

Inslee is set to sign the state’s supplemental operating budget Friday and said that he’ll be using his veto pen in some areas to reduce some of the appropriated spending “to give the us a cushion to deal with this anticipated severe reduction in revenues.”

“We have to be fiscally responsible in this regard,” he said. He said at this point, there was no immediate plan to call the Legislature back for a special session, but would be ready to if necessary.