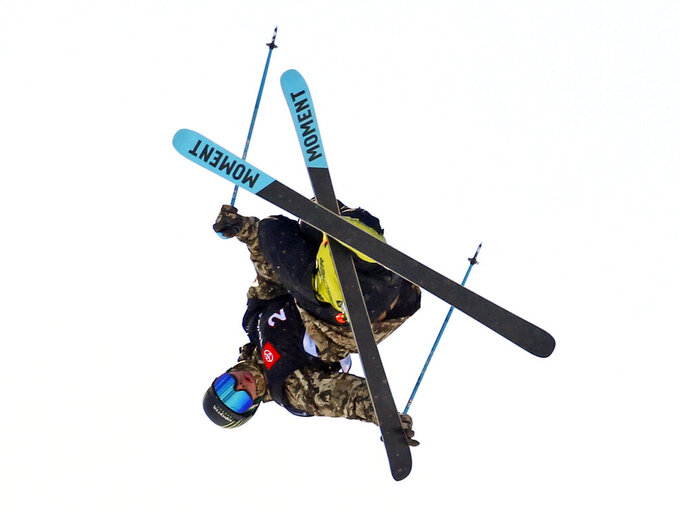 FILE - David Wise, of the United States, competes during the qualifications for men's halfpipe skiing world championship Thursday, Feb. 7, 2019, in Park City, Utah. Wise is back at the Olympics looking for a third gold medal in men's freestyle halfpipe. (AP Photo/Rick Bowmer, File) 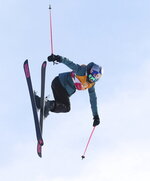 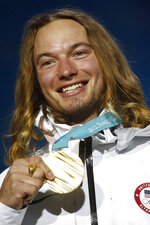 David Wise is playing with house money. And he knows it.

So, ask the only man to ever win Olympic gold in the halfpipe if he feels pressure bidding for a three-peat in China and the free-spirited 31-year-old freestyle skier just laughs.

“I really, truly feel like I’m going to be the hardest guy (to beat) because I have I have nothing to prove,” Wise said after finally locking in a spot with a runner-up finish at the U.S. Grand Prix in Mammoth Mountain, California, on Jan. 7. “I just get to go out there and enjoy the ride. I’m not going to be stressed.”

Stress is laying on the ground with your femur shattered, as Wise did following a crash in 2019. Stress is heading to the final pre-Olympic event needing to put together a podium-run to lock up a spot. Stress is not standing atop the halfpipe on the sport's biggest stage with a medal at stake. Heck, that's the Reno, Nevada, native's idea of a good time.

He figures to be in another battle with American teammates Alex Ferreira — who he narrowly edged for gold in Pyeongchang four years ago — and Aaron Blunck among others. Wise, however, knows his legacy is firmly in place no matter how it goes. That freedom makes him perhaps even more dangerous.

“I’m not going to be saying ‘I have to do this run for me,’” he said. “I look at it more as an opportunity. I have an opportunity to do what I’ve always loved to do in front of a huge crowd and represent the USA one more time. So it’s just opportunity. It’s like, ‘Yeah, let’s let’s go do one more. I get I get one more chance. Let’s do this.’”

Eileen Gu is eyeing history of a different kind. The 18-year-old California-born star — who is just as comfortable posing for Vogue as she is creating a flexible relationship with the laws of gravity — will attempt to medal in all three disciplines: halfpipe, slopestyle and Big Air. And she'll do it while competing for China, where her mother Yan emigrated from in her 20s.

It's a decision Gu made in part to help grow the sport in a country that's hardly a super power in the Winter Games.

Don't get her wrong. Gu wants to win. And if she can do it by playing a role in redefining what's possible for a country of 1.4 billion, all the better.

“I (want to) be able to have those medals and to be able to feel like I changed someone’s life or changed the sport or introduced the sport to a country where it wasn’t before,” she said.

Gu is a heavy favorite to claim gold on the halfpipe — where she is unbeaten this season — and is a threat in slopestyle and Big Air, which will be making its Olympic debut in freestyle skiing after being limited to snowboarding in Korea.

Other things to look for during what will be a very busy three weeks at Genting Snow Park and Big Air Shougang.

Mixed team aerials will be one of seven new medal events added to the Olympic program in Beijing. In this contest, a national team consisting of three skiers -- with at least one male and one female -- will each attempt one trick off the jump. The three scores are combined for an overall total. The final is scheduled for Feb. 10.

The Russian team -- known as the Russian Olympic Committee (ROC) for the Beijing Games -- won the mixed team event at the 2021 world ski championships, with Switzerland taking second. The Americans took bronze behind a squad that consisted of Ashley Caldwell, Eric Loughran and Christopher Lillis.

As a kid, Canadian moguls standout Mikael Kingsbury placed a drawing of the Olympics rings on his bedroom ceiling and wrote: “I’m going to win.” Four years ago in Korea, Kingsbury's prophecy came true.

The 29-year-old has long been a force on the moguls scene, winning six world championship titles and recording 70 World Cup wins. He’s returned to form after a training crash in December 2020 that resulted in two fractured vertebrae. One of the top contenders will be Ikuma Horishima of Japan.

On the women’s side, Perrine Laffont of France is the defending Olympic champion. She’s currently third in the World Cup rankings, behind leader Anri Kawamura of Japan and Jakara Anthony of Australia. The Americans have a deep moguls team with Hannah Soar and Jaelin Kauf each having achieved the criteria for nomination.

Once an Alpine ski racer, ROC’s Sergey Ridzik crossed over to skicross and it’s been high-speed success ever since. Ridzik, the bronze Olympic medalist in 2018, and Sweden’s Sandra Naeslund clearly like the Beijing course as both won a World Cup event at the venue in November.

Don’t count out defending Olympic champion Brady Leman of Canada. He took second on the Beijing course. So did Swiss racer Fanny Smith, who earned Olympic bronze in ’18.

There will be a new women’s Olympic champion following the retirement of defending champion Kelsey Serwa of Canada. Her teammate, Brittany Phelan, remains a strong contender. She was the silver medalist in South Korea.