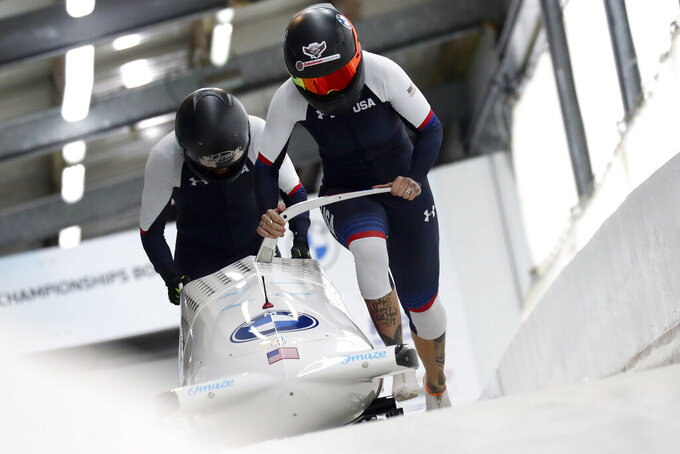 FILE - In this Feb. 5, 2021, file photo, Kaillie Humphries and Lolo Jones, of the United States, start during the two-women's bobsled race at the Bobsled and Skeleton World Championships in Altenberg, Germany. Reigning women’s world bobsled champion and three-time Olympic medalist Humphries has asked the International Olympic Committee for a solution that would allow her to compete in this winter’s Beijing Games even though her American citizenship will not be finalized. (AP Photo/Matthias Schrader, File)

Reigning world champion Kaillie Humphries was announced as part of this season's USA Bobsled national team on Monday, even with her status for this winter's Beijing Olympics remaining unclear.

Humphries was a lock to make the team after winning gold medals in both the traditional two-person and the new women's monobob event at last season's world championships.

Lolo Jones, the Olympic hurdler-turned-bobsledder who pushed Humphries' two-person sled on the way to that world championship last winter, also was selected for the national team. The teams were revealed Monday morning in Lake Placid, New York.

Humphries will compete in World Cup races this season and be part of the U.S. contingent traveling to China next month for the first race of the season on the newly built track that will play host to the Olympics in February.

But her Olympic status remains murky because she has yet to receive a U.S. passport and has asked the International Olympic Committee to grant her permission to race at the games — where she would be a gold-medal favorite in two events.

Joining Humphries as drivers on the women's team this season are Elana Meyers Taylor and Brittany Reinbolt. And joining Jones in the pool of women's push athletes are Aja Evans, Lauren Gibbs, Sylvia Hoffman, Lake Kwaza and Kaysha Love.

The USA Skeleton national team was also announced Monday, led by Katie Uhlaender — who is seeking to compete in her fifth Olympics in what will be her final season — and fellow Olympic veteran John Daly.

Megan Henry and Kelly Curtis will join Uhlaender on the women's World Cup team. Daly will be joined by Austin Florian on the men's team for World Cup races to open the season.

The six skeleton athletes picked to open the season on the Intercontinental Cup tour, which could provide a path toward making the Olympic team, were Kendall Wesenberg, Savannah Graybill, Sara Roderick, Andrew Blaser, Dan Barefoot and Stephen Garbett.

The U.S. will announce its Olympic teams for bobsled and skeleton in January.