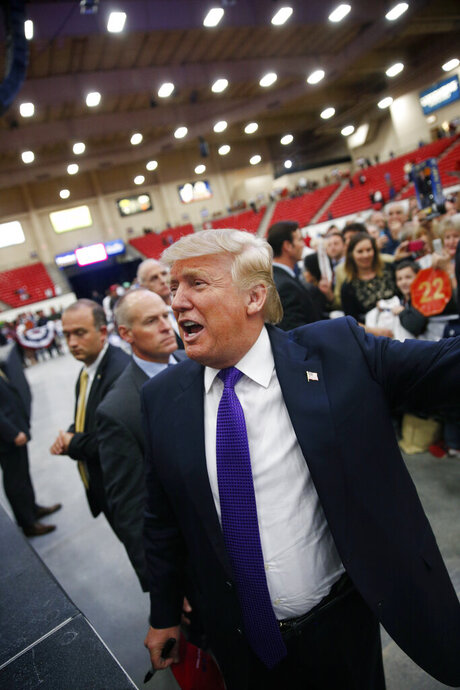 By: DOUG FERGUSON (AP)
PALM BEACH GARDENS, Fla.Copyright 2020 The Associated Press. All rights reserved. This material may not be published, broadcast, rewritten or redistributed.
26.8234-80.1386

PALM BEACH GARDENS, Fla. (AP) — Whether the road to the Masters started at Riviera (Rory McIlroy), PGA National (Rickie Fowler) or Doral (Jordan Spieth), qualifying for the most restricted field of the majors starts with the Florida swing.

Last year ended with 89 players having earned invitations to Augusta National. Seven weeks into the new year, the number is likely to be unchanged.

The only PGA Tour winner to earn a spot so far is Vaughn Taylor, who won the AT&T Pebble Beach National Pro-Am. The other addition was Paul Chaplet, who won the Latin America Amateur Championship. While there have been no official subtractions, Jim Furyk had wrist surgery and is hopeful of a return in May at The Players Championship, and the latest report on Tiger Woods is no report at all. It would be surprising if he returned to the Masters.

There are six PGA Tour events left for players to earn a spot in the Masters, and two of them are World Golf Championships: the Cadillac Championship at Doral, and the Dell Match Play in Texas. The latter has the top 64 in the world, and currently only seven of those players are not yet eligible for the Masters.

After two years of the Masters field coming close to 100 players or more for the first time since 1966, it most likely won't come close to that this year. Augusta National will take the top 50 in the world ranking after the Match Play. As of Monday's world ranking, everyone in the top 50 already is exempt.

Jones lost a good opportunity when he missed the cut at Riviera. The top 50 effectively get a free start at Doral, though Jones can still qualify if he were to move into the top 50 after the Honda Classic this week. Cabrera Bello and Fraser earned spots in Doral by being in the top 10 on Europe's money list. Pieters narrowly missed out when Nathan Holman won in Malaysia.

Woodland and Palmer are playing in the Honda Classic this week.

CHOI'S RESURGENCE: K.J. Choi was the vice captain at the Presidents Cup in South Korea. He turns 46 this year and is in the final year of his exemption from winning The Players Championship. He ended last year at No. 302 in the world.

And he is quietly making a big move.

Choi was a runner-up at Torrey Pines and he was among those tied for the lead on the back nine at Riviera until he tied for fifth. One reason for the resurgence might be his desire to play in the Olympics this summer.

"I want to play for South Korea, but I need to have wins," he said. "That's why I'm training the last two months, three months, very hard."

"You'd want to be a little older than 12 to look up to me as his idol," Harrington said.

His sporting heroes at age 12 were in soccer, and he really didn't pay attention to elite golf until he was 16. That would have been about the time Nick Faldo was winning his first major and Seve Ballesteros and Greg Norman were battling for No. 1 in the world.

His hero? Bernhard Langer. Harrington called him the "professional's professional."

"Got the most out of his game," he said. "Came back from the yips twice. That's just unheard of. Absolutely phenomenal how much he got out of the game from his work and dedication. I've always admired that much more so than people who it comes easy to. Bernhard Langer, it never came easy to him, and definitely a hero of mine."

SLUMBERS ON TURNBERRY: If the British Open returns to Donald Trump-owned Turnberry, it won't be until at least 2022.

R&A chief executive Martin Slumbers, in a meeting with British golf writers this week, said negotiations have begun for the 2020 and 2021 championships. One of them will be in England to balance between English and Scottish links in the rotation.

"At no point during those discussions has Turnberry been part of that," Slumbers said. "So that's where we are. And 2022 and beyond it is something we don't have to think about for a few years."

Historically, that would not be unusual.

Turnberry last hosted The Open in 2009 after an absence of 15 years. The main reason for waiting were the roads leading to the Ayrshire town. Then again, Trump pledged big upgrades to the hotel and the golf course when he bought the property.

Slumbers didn't say whether Trump's views during his campaign for the GOP nomination are causing the R&A to think twice about staging The Open there.

"We're asking the very best players in the world to come and put their names to a championship which we've written down in history, and we feel deeply that the quality of the golf course and the challenge we give them should be commensurate with the quality of the players and the commitment that the players make," he said. "But we are also very focused on the macro environment. We as an organization have said that we believe golf should be open to all, regardless of gender, race, nationality or religion, and that's where we sit."

RANKING GAME: While the Honda Classic has been gaining in strength over the last five years, this year's field is not as strong at the top as it has been in recent years.

Attribute that to a change in the world rankings. And to Tiger Woods.

DIVOTS: This will be only the third time this year that either the No. 1 or No. 2 player in the world ranking was not competing. ... Charley Hoffman and Kevin Streelman have been elected co-chairs of the Player Advisory Council. They will replace Bo Van Pelt and Mark Wilson on the PGA Tour policy board next year and serve three-year terms. ... The R&A and the Ladies Golf Union have agreed to merge. ... Simon & Schuster says it will publish a biography on Tiger Woods, to be written by Jeff Benedict and Armen Keteyian. The title and publication date have not been determined.

STAT OF THE WEEK: Bubba Watson was only the second player in the top 10 in the world to win on the PGA Tour this season. No. 1 Jordan Spieth won at Kapalua.

FINAL WORD: "Nobody is looking at records when it comes to tournament records. All we're looking at is trophies." — Bubba Watson.