Home » Netherlands » All the way like FBK: Schippers sets targets for Olympics 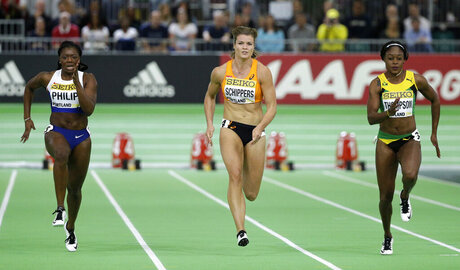 By: RAF CASERT (AP)
HENGELO, NetherlandsCopyright 2020 The Associated Press. All rights reserved. This material may not be published, broadcast, rewritten or redistributed.
52.26586.79306

HENGELO, Netherlands (AP) — It was fitting that Dafne Schippers streaked away from her rivals to set the fastest 200-meter time in the world this year at the wet, windy and chilly FBK Stadion.

The stadium was named in honor of the great Fanny Blankers-Koen, who won four Olympic sprint titles at the 1948 London Games.

One close observer who can compare the Dutch sprinters is Jan Blankers, the 74-year-old son of the national legend, who told The Associated Press of Schippers: "Her style, her build. She reminds me of my mother."

The similarities are giving sports fans in the Netherlands hope for gold on the track in Rio de Janeiro.

And Schippers continues to reinforce that hope, barely two months ahead of the Olympics in Rio, where she is a favorite in the 200, a strong challenger for gold in the 100 and has an outside shot at a medal in the relay. With such a performance, she would break the recent stranglehold of U.S. and Jamaican athletes on Olympic sprinting.

Three Olympic medals would be a major achievement for Schippers, but may not have quite the same aura of four golds — after all, FBK is a tough act to follow after winning the 100, 200, 80-meter hurdles and relay in '48.

The IAAF, the world governing body for track and field, elected Blankers-Koen as the top female athlete of the 20th century. Little wonder Schippers doesn't want to race history too much.

"To be honest I haven't looked back too much at the old reels," Schippers said, avoiding being drawn into comparisons of powerful strides and strong physiques. Still, the 23-year-old Schippers was touched by the Blankers' comparison. "Different times, but it is great to hear."

After last Sunday's top time of 22.02 seconds in the 200, she left the provincial crowd behind and flew off to the United States, where she will face some of her toughest U.S. and Jamaican opponents at the Eugene Prefontaine Diamond League meet Saturday.

It will be another step in the unlikely transformation of an elite heptathlon competitor into the one of the world's foremost sprinters — which Schippers now is since she won the 200 and took silver at the 100 at the world championships in Beijing last year.

After capping an early career in the heptathlon with a bronze medal at the 2013 world championships in Moscow, she steadily found out that her extraordinary speed was better served focusing on the sprints rather than spread over seven disciplines. After a season of wavering, she finally decided to concentrate on the sprints.

The switch of events required a shift in her mental approach to competition, too. She had to leave behind the camaraderie of the heptathlon, which often concludes in a sweaty scrum of bodies at the end of their two-day competition, and learn to deal with the sometimes ice-old air and egos in sprinting.

Moving to the higher-profile 100 and 200 also meant changes off the track.

"I can no longer walk everywhere I want to walk," she said, as she was mobbed by teenage fans who might hardly have recognized her as a heptathlete. "It is a totally different year, really. Everything is different."

Demands from the media have increased, and her openness of years past has given way to pragmatism.

If doping controls already seemed intense to her last year, it has now gone to another level. She said two testers showed up within five minutes a few weeks ago — one international controller, another national. "That's part of it," Schippers said.

That's why she loves coming to the FBK Stadion, where signing around the track during her 200 flashed up the message "Go Dafne," and which is as close to a family meet as she'll find anywhere. One hour before her race, she was still chatting and smiling with friends in the public stands, taking in the waft of quiche and beer. "My only thought was, 'keep it away from me,'" she said, explaining she can have a tender stomach ahead of a race.

After the race is a different matter, though, as her food blog attests.

"I do crave chocolate," she sighed. "It is horrible when I cannot touch it. So every now and then, I still grab a piece."