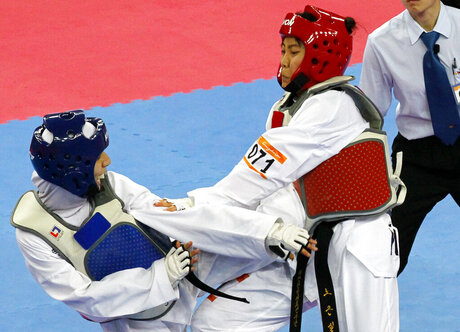 By: RAF CASERT (AP)
BRUSSELSCopyright 2020 The Associated Press. All rights reserved. This material may not be published, broadcast, rewritten or redistributed.
50.85044.34878

BRUSSELS (AP) — For a refugee, competing in the Olympics is an improbable dream. Now, former Iranian taekwondo fighter Raheleh Asemani seeks to go one better — earn a medal for her newly adopted nation, Belgium.

Asemani, who was among the candidates being considered by the IOC for a team of refugee athletes to compete in Rio de Janeiro, gained Belgian citizenship on April 13.

For her to switch from possibly representing the refugees to competing for Belgium, she needs the International Olympic Committee's blessing and IOC President Thomas Bach said in an interview with the Le Soir paper published Wednesday that she indeed would get such approval.

Asemani left Iran more than three years ago and came to Belgium where, under difficult conditions and with financial help from local federations, she was able to compete.

"It was a tough time. I could not use my nationality during (Olympic) qualifying," Asemani told The Associated Press.

She was able to qualify only with a refugee exemption by competing under the World Taekwondo Federation flag. Now the time has come to show her gratitude for her new homeland.

"I have everything from Belgium,'" she said. "I trained really hard in Belgium. Everything was all right for me in Belgium. So what can be more beautiful than to have a country at the Olympic Games? For the overwhelming majority of competitors, nationhood is a given. But for refugees, lack of it can mean an early end to an international career."

Asemani stood out in Iran's male-dominated society by winning a silver medal at the 2010 Asian Games in Guangzhou, China. Two years later, after missing out on the London Olympics, her career seemed to be on the wane at 23.

When she visited an aunt in Belgium soon after, though, she picked up training again, and may have fallen further out of grace with Iranian authorities when she fought an Israeli as part of a Belgian squad.

Asemani was reluctant to discuss the politics surrounding her asylum status before she gained Belgian citizenship. But without a nation, she could not compete in major qualifying events, and her Olympic hopes were all but buried.

"Mentally, it broke me down," she said. "But my papa kept saying, 'You will go to qualifying, I am sure about it.'"

Then, last year, the IOC took up the cause of refugee athletes. Asemani was one of 43 athletes singled out for consideration for the team, which is expected to have between five and 10 members and will be announced by the IOC in early June.

"It was important, first and foremost, to get to the games. Now, it is better for me to be in the Belgian team, because I am Belgian now," she said in more than passable Dutch she has learned since moving.

"Now Belgium feels like my country," she said. "What can be more beautiful for me? I can do something for my country."