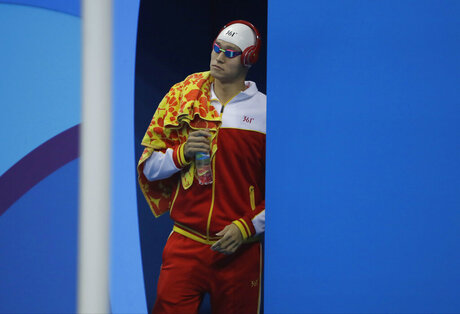 By: BETH HARRIS (AP)
RIO DE JANEIROCopyright 2020 The Associated Press. All rights reserved. This material may not be published, broadcast, rewritten or redistributed.
-22.9028-43.2075

Horton won his first Olympic gold medal with a time of 3 minutes, 41.55 seconds Saturday night before the Australian women capped the first night of swimming with a world-record victory in the 4x100 freestyle relay.

After the preliminaries, Horton was asked about a reported incident between him and Sun at the practice pool earlier in the week. The Aussie said Sun "splashed me to say hello, and I didn't respond because I don't have time for drug cheats."

In 2014, Sun served a three-month suspension for using a banned stimulant.

"The last 50 meters I was thinking about what I said and what would happen if he gets me here," said Horton, who beat Sun by just 13-hundredths of a second. "I didn't have a choice but to beat him."

Horton was asked by a Chinese reporter why he described Sun that way.

Horton celebrated his victory without even acknowledging Sun in the lane next to him. Sun made a move as though he wanted to congratulate Horton, but the winner looked the other way. They got out of the pool together but acted as if the other didn't exist.

"I don't think we need to care too much about what the Australian says," Sun said through a translator. "I've got a gold medal (from 2012) and my world ranking. I don't need to prove myself anymore."

Still, Sun defended himself after the race.

"I am clean," he said. "I've done whatever it takes to prove I'm a clean athlete."

Horton and Sun finally gave each other a begrudging handshake on the medal stand, but that was about it.

Sun described the last four years as being "tough," in part because of mistakes he's made.

In November 2013, he was caught driving without a license after an accident in China. At last year's world championships in Russia, he was accused of an altercation with a female Brazilian swimmer in the warm-up pool and then he failed to show up for the 1,500 freestyle final.

"I've learned," the 24-year-old Chinese swimmer said. "I know now to face up to failure and have a broader perspective. Those are invaluable lessons to me. All those hard-learned lessons will guide me through the rest of my life. Being young, sometimes you can get a bit naughty. You don't have a lot of common sense."