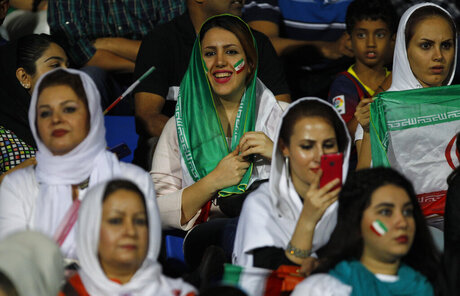 By: JANIE McCAULEY (AP)
Copyright 2020 The Associated Press. All rights reserved. This material may not be published, broadcast, rewritten or redistributed.

Iranian women report they are being barred from attending a major volleyball tournament featuring the Olympic-bound men's national team, reigniting a debate about whether Iran should be allowed to host international matches.

Despite a commitment from volleyball's world governing body that women would be able to attend this weekend's World League tournament at the Azadi Sport Complex in Tehran, Iranian women who have pushed to make sporting events more open say they haven't been able to purchase tickets despite multiple efforts to buy them online.

Female fans are traditionally barred from attending male-only sporting events in Iran — efforts by authorities to enforce strict interpretations of Islamic norms — but many women are pushing to change that practice.

The International Federation of Volleyball, Switzerland-based FIVB, streamed the Argentina-Italy and Iran-Serbia matches Friday, showing a segregated section of women in the stands. It was unclear if the women were members of the general public or invited guests and VIPs. A female announcer handled substitutions during Iran's match.

FIVB released a statement noting that the Iranian federation said Friday's matches sold out within five minutes, and that 466 of the 5,000 tickets were allotted for a section set aside for women. The area of seats, shown repeatedly on the livestream, didn't appear that large.

From the moment tickets became available, the website for sales said the female allotment had been filled, according to several women who say they tried to purchase tickets.

"Honestly when I saw their 'statement,' I said, 'If FIVB were Pinocchio, their nose was from Lausanne to Tehran.' Why they lie this much?" said a 32-year-old Iranian female representative from a group called Open Stadiums. She declined to give her name out of concern for retaliation. The Open Stadiums Twitter account identifies itself as "A movement of Iranian Women seeking to end discrimination and let women attend stadiums."

"We've been following the case closely and I am disappointed to say that despite FIVB's claims to have assurances from the Iranian Volleyball Federation, the tickets have not been available to women so far," she said in an email to The Associated Press along with a screen shot of the ticket website.

Iran rallied to win Friday's match against Serbia in five sets before a wildly enthusiastic standing-room only capacity crowd of 12,000. The home team faces Italy on Saturday.

In 2012, the longtime ban on women from soccer matches in Iran was extended to volleyball. Former U.S. Secretary of State Condoleezza Rice last year called the ban "ridiculous" and said that nations that are part of international bodies should respect women's rights.

FIVB has pushed Iranian officials to make concessions for women. The sport's profile is rising in the country, tied to the national team's success.

Eighth-ranked Iran qualified for its first Olympic tournament as one of the 12 teams set to play in Rio de Janeiro this August.

"It is important to emphasize that this is a first step of a long-term campaign to reinstate female spectators at volleyball events in Iran and one which the FIVB is 100 percent committed to," FIVB said in a statement.

"Our policy is one of engagement and diplomacy to secure inclusion through sport not through the threat of isolation. While we understand that volleyball alone can't enforce change, we appreciate that we have a significant platform for creating dialogue and the FIVB will continue to strive for sport's power as an agent for positive change to be fully realized."

For a February beach volleyball event at Iran's Kish Island, women weren't allowed to watch the tournament with FIVB claiming "misunderstandings" were at the root of the issue. Women then were later allowed to see play from a cafe overlooking the main court.

The issue first drew international attention in June 2014, when British-Iranian student Ghoncheh Ghavami was detained when she tried to attend a men's volleyball match at Azadi. She spent more than 100 days in prison, much of it in solitary confinement.

The case prompted FIVB President Ary Graca to urge Iranian officials to release her. He told the volleyball federations at the end of their world congress: "We never normally seek to interfere with the laws of any country. But in accordance with the Olympic Charter, the FIVB is committed to inclusivity and the right of women to participate in sport on an equal basis."

Also, in November 2014, FIVB said Iran would not be chosen to host a boys' under-19 world championship in the wake of Ghavami's imprisonment. She was initially sentenced to a year in prison for spreading propaganda before charges were dropped.

USA Volleyball board chair Lori Okimura also has been outspoken on the cause.

"This blatant gender discrimination of not allowing women access to purchase tickets to watch their teams play in Tehran, to me, significantly diminishes the accomplishments of the national teams in the world's view," she said Thursday.

"Continuing to award Iran international volleyball events, when this condition is in effect sends the message, loud and clear, that gender discrimination is accepted by the FIVB and its 221 member federations. It is not."

The woman from Iran with Open Stadiums watched on television from home Friday night alongside her mother and sister — eating sunflower seeds and having dinner, not much different from a U.S. baseball game.

"We always watch because we really like our team. I'm sport fan!" she said. "Usually I watch many sport matches."