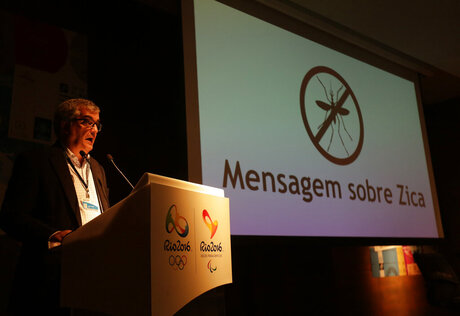 By: By STEPHEN WADE (AP)
RIO DE JANEIROCopyright 2020 The Associated Press. All rights reserved. This material may not be published, broadcast, rewritten or redistributed.
-22.9028-43.2075

The Zika virus is overshadowing the final preparations for the Rio de Janeiro Olympics, even eclipsing concerns over deep budget cuts and severe water pollution.

Hundreds of reporters packed Olympic headquarters on Tuesday to hear about ticket sales, venue construction and a reminder that Friday marks six months until the opening of the games on Aug. 5.

Instead, they got the organizers' medical director, Dr. Joao Grangeiro, and government health officials offering assurances that the games will be safe from Zika and that only pregnant women are at risk from the mosquito-borne virus with its epicenter in Brazil.

“Athletes should come to the Olympic Games,” said Grangeiro, who said organizers are following guidelines by the World Health Organization, which calls the spread of the virus an "extraordinary event and public health threat."

“They (athletes) are not at risk,” Grangeiro added, promising the mosquito count will fall in August during Brazil’s winter.

“We will have Summer Games, but for us it’s winter time. We will not have an epidemic or pandemic situation. ... We can't say we won’t have any cases (during the Games) but we see this as a minimal risk.”

Daniel Soranz, Rio’s city health secretary, told reporters the mosquitoes around the Olympic Park, the heart of the games, were not primarly the Aedes aegypt type that transmist Zika.

Jaques Wagner, the chief of staff for Brazil president Dilma Rousseff, said Monday there was no risk to athletes unless “they are pregnant women.” He said they were “not recommended” to travel to Brazil.

The Zika virus is another blow to Rio organizers, who have cut about $500 million from the operating budget _ about 30 percent _ with Brazil going through its deepest recession since the 1930

The value of local currency has lost about 30 percent of its value against the dollars in the last year, inflation is above 10 percent and President Dilma Rousseff is fighting impeachment.

“In this case the most important thing to do is obviously to care for those who have been infected and to prevent new infections and not to worry if we have budget or not,” Andrada said.

“We have the funds that we need to do the work that we have to do,” Andrada added without specifying the cost.

He was also asked if tourists were getting worried about traveling to Brazil.

“No. I don’t have even on request to return tickets,” he replied.

Christophe Dubi, the Olympic Games Executive Director, said sports federations were briefed about Zika on Tuesday at the IOC offices in Lausanne, Switzerland.

He said the Olympics had dealt with the SARS virus before Beijing Olympics, and Ebola during the Nanjing 2014 Summer Youth Games.

"It is not unusual, not comfortable obviously, but at the same time there’s a very good response from the Brazilian authorities,” he said, “especially with huge mobilization of armed forces."