'64 Tokyo Olympics: A man from Hiroshima lights the cauldron 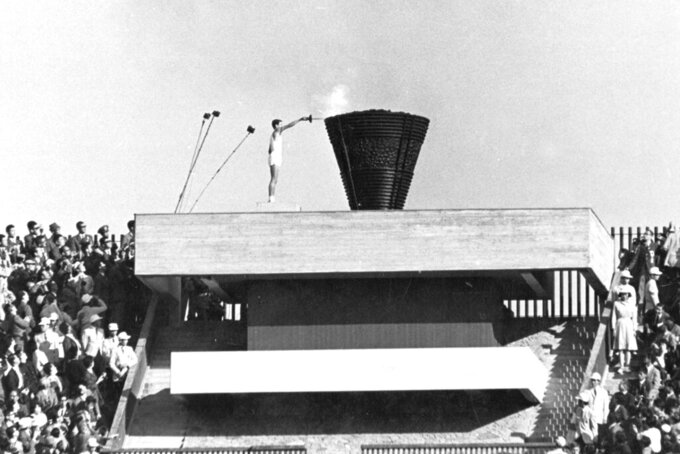 FILE - In this Oct. 10, 1964, file photo, Japanese runner Yoshinori Sakai lights the Olympic cauldron during the opening ceremony of the 1964 Summer Olympics in Tokyo. Sakai was born in Hiroshima on Aug. 6, 1945, the day the nuclear weapon destroyed that city. The 1964 Tokyo Olympics are being remembered fondly following the postponement until 2021 of the Tokyo 2020 Games. The '64 Olympics were the first to be televised internationally using communication satellites. (AP Photo/File) 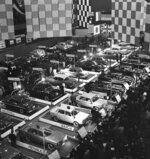 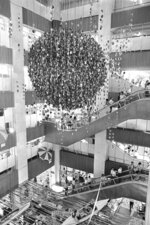 TOKYO (AP) — It was the year Cassius Clay won the heavyweight championship and became Muhammad Ali. When Roy Emerson of Australia and Maria Bueno of Brazil took the titles at Wimbledon, when Arnold Palmer claimed his fourth and final Masters, and when the Beatles arrived on a Pan Am flight from London to play their first concert in the United States.

Japan was back only 19 years after defeat in World War II, and nothing symbolized its rebirth more than the Olympics and the Shinkansen bullet trains that began running as the games opened.

“They were a beautifully done Olympics and the beginning of my Olympic odyssey," said Bill Mallon, a former professional golfer, orthopedic surgeon and former president of the International Society of Olympic Historians. “I was 12 years old in 1964, and when I first became fascinated with the Olympics.”

They also grabbed Roy Tomizawa. His father Tom, a second-generation Japanese-American, was an editor working for the television network NBC at the Olympics in Tokyo — the first to be shown internationally using communication satellites.

The family connection and curiosity got Tomizawa looking for a history in English of those 1964 Games. He couldn't find one, so he wrote his own. The English version came out last year, and the Japanese-language edition will be available in May.

“Any major book like this didn't exist,” he said in an interview with The Associated Press. “There’s usually a book on every Olympics, but for some reason on the Tokyo Olympics there was nothing.”

The book is titled “1964 — The Greatest Year in the History of Japan: How the Tokyo Olympics Symbolized Japan's Miraculous Rise from the Ashes.”

Tomizawa, who grew up in New York and has worked for 20 years in Japan, interviewed 70 Olympians from 16 nations. Some were famous at the time: Australian swimmer Dawn Fraser or American 10,000-meter gold-medalist Billy Mills.

Some made other history, like Bulgarian teammates Nikolai Prodanov and Diana Yorgova, who were married in Tokyo during the Olympics. It was billed as the first Olympic wedding and featured a Shinto priest, sake, traditional Bulgarian dances, and an interpreter to explain what was happening.

“I think the Olympians tell more of the story of the games themselves and their reaction to what they saw of Japan,” Tomizawa said. "Some had been to Japan in ’50s and ’60s. I think everyone was surprised and shocked when they arrived in Japan thinking it would be a backward economy.”

“For the Canadians, the Australians, the Americans, the Brits — it was the brutal enemy," Tomizawa said. “When they came they were welcomed and given such help and support and cheering. It was a surprise to all of them.”

Tomizawa said his most memorable interview was with Jerry Shipp, who was a shooting guard on the American gold-medal winning basketball team coached by Hank Iba. It lasted for several hours with Shipp recounting a tough childhood growing up in an Oklahoma orphanage.

“His teachers told him he was stupid,” Tomizawa recounted. “He struggled with math and everything else. They told him: ‘You're not going to amount to anything. You’ll probably end up in prison one day.'"

Tomizawa recalled Shipp explaining how, at the gold-medal ceremony when the television camera red light went on, he stared straight into the lens and told off a teacher by name, saying: “I hope you're watching, 'cause I made something out of myself."

Tomizawa said he sent the book to Shipp, and received a reply from his daughter.

“She didn’t know all these stories he had revealed to me,” Tomizawa said. “She sent me a picture of him with the book and I just felt very connected. In the interview he was remembering all the bile and what got him to that point of success."

Mallon, the historian, told the AP that Tokyo marked the beginning of the expansion of the Olympics, which had barely changed since World War I. Tokyo added judo and volleyball. It was also the beginning of soaring costs.

“In fact, Tokyo 1964 remained the most expensive Olympics ever, when corrected for inflation and on a per-athlete basis, until Beijing 2008," Mallon said.

Tomizawa said the one-year postponement of the 2020 Tokyo Olympics because of the coronavirus was unlikely to dampen enthusiasm in Japan — if the pandemic is controlled by then. The Olympics in 2021 will be held up as a time to celebrate.

"I’m not going to make a million dollars from my book, but I was just given another year and several months of marketing," Tomizawa said. “I can’t complain.”