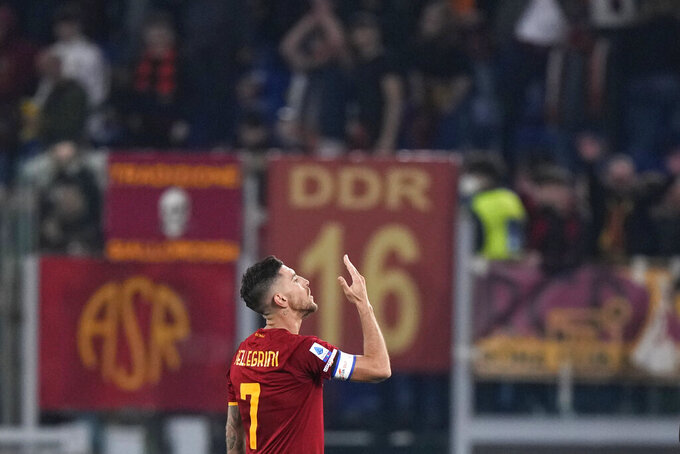 MILAN (AP) — Fan favorite Tammy Abraham scored two goals as Roma swept aside Lazio 3-0 in the capital derby in Serie A on Sunday.

That took Abraham’s tally to 15 in the league this season and nine since the start of January. In 2022, only Bayern Munich's Robert Lewandowski has scored more goals than the England international in Europe’s top five leagues.

Roma had its first goal with less than a minute on the clock and was 3-0 up at halftime in a dominant performance from José Mourinho’s side.

Mourinho said Abraham had shown what he was capable of.

“When you all said that Abraham is fantastic I did not agree, because I know the potential he has and I know that he is capable of what he did today," Mourinho said. “And I’m not just talking about the two goals, but I’m talking about how he played, how he pressed, how he won the ball back.

“I demand a lot of Tammy because I know his potential. Today is what Tammy is capable of and he needs to keep playing like this ... he needs to have the attitude he showed today in every game.”

Roma leapfrogged above Lazio into sixth, level on points with fifth-place Atalanta but eight points below the top four.

Lazio won the opening derby this season but Roma got off to the perfect start this time. After just 56 seconds, Lorenzo Pellegrini’s inswinging corner hit the crossbar and rebounded in off Abraham’s thigh.

Abraham doubled his tally in the 22nd when he acrobatically turned in Rick Karsdorp's cross into an empty net with Lazio goalkeeper Thomas Strakosha stranded at his left post.

Roma’s third goal was a stunner as Pellegrini curled a free kick into the top right corner from nearly 30 yards out to all but wrap up the points with five minutes remaining until the break.

Lazio was lucky not to go in even further behind as Henrikh Mkhitaryan’s effort bounced off the crossbar.

Dušan Vlahović set up one goal and scored another as Juventus eased to a 2-0 win over bottom club Salernitana to move within a point of defending champion Inter Milan.

Paulo Dybala marked his return to the starting lineup following injury by scoring the opener as fourth-place Juventus closed in on the top three, although Massimiliano Allegri’s side is still seven points behind Serie A leader AC Milan.

Juventus plays third-place Inter — the club that ended its run of nine straight Serie A titles — after the international break. The result will assuage Juve's disappointment at going out of the Champions League against Villarreal midweek.

Teenager Moustapha Cissé scored on his Serie A debut to help Atalanta to a 1-0 win at Bologna, less than a month after playing in the eighth tier of Italian soccer.

The 18-year-old Cissé was discovered while playing for ASD Rinascita Refugees — a team made up entirely of foreign players who are seeking asylum in Italy.

Cissé, a refugee from Guinea, came on in the 65th minute in Bologna and scored the only goal of the game eight minutes from time.

The first came in the 24th minute when Venezia goalkeeper Niki Mäenpää took too many touches in his own penalty area and Abdelhamid Sabiri stole the ball off him, allowing Caputo to deposit into an empty net.

It was the fault of Venezia midfielder Luca Fiordilino 14 minutes later as he lost the ball easily to Sabiri. Mäenpää could only parry Stefano Sensi’s strike and Caputo tapped in the rebound.

Hellas Verona drew 1-1 at Empoli after striker Giovanni Simeone failed twice with the same penalty. His first attempt was saved by Empoli goalkeeper Guglielmo Vicario but had to be retaken following an encroachment. Simeone smashed his second effort off the upright.