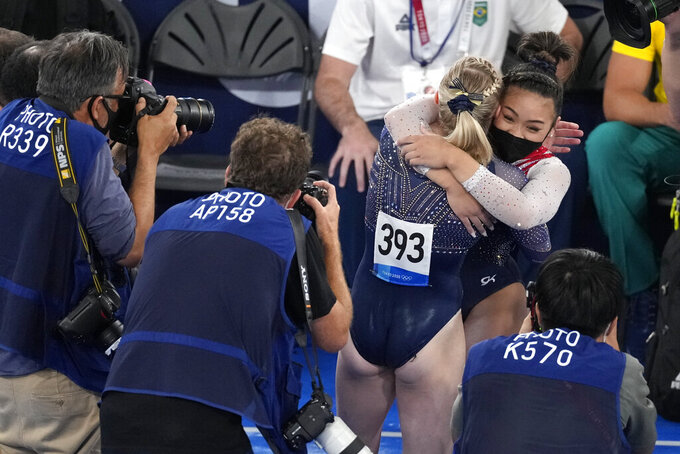 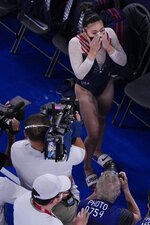 It all had become too much. The lingering pain from a broken foot. The deaths of two family members from COVID-19. Her father's slow recovery from an accident that left him paralyzed.

The urge eventually passed. It always does. Still, less than two months ago the 18-year-old gymnast hobbled around the podium at the U.S. championships, getting by more on grit than anything else.

Tokyo seemed far away. The top of the Olympic podium, even further.

Then suddenly, there she was on Thursday night as a tinny version of “The Star-Spangled Banner” echoed across Ariake Gymnastics Centre. Gold medal around her neck. A watch party back home among the Hmong-American community in her native Minnesota raging. A victory she never envisioned not yet sinking in.

Even though the pain in Lee's foot eased — funny how it seemed to get better the more she trained — she arrived in Japan figuring her best shot was at a silver medal. Sure, she'd beaten good friend and reigning Olympic champion Simone Biles during the final day of the U.S. Olympic Trials last month, but that was an anomaly, right?

Then Biles opted out of the all-around competition to focus on her mental health following an eight-year run atop the sport.

Everything was on the table. Gold included. Lee took it with a brilliant set on uneven bars, a nervy performance on beam and a floor exercise that made up for in execution what it might have lacked in aggression.

Her total of 57.433 points was just enough to top Andrade, who earned the first gymnastics all-around medal by a Latin American athlete but missed out on gold when she stepped out of bounds twice during her floor routine.

Russian gymnast Angelina Melnikova added bronze to the gold she won in the team final. American Jade Carey, who joined the competition after Biles pulled out, finished eighth.

Biles' decision to sit out led to the jarring sight of the gymnast considered the greatest of all time cheering on Lee and the rest of the 24-woman field from the stands with the gold that's been hers for so long now in play for everyone else.

Still, Lee did her best to not think about the stakes. She FaceTimed with her father John — who was paralyzed from the chest down during a freak accident in Minnesota just days before the 2019 national championships — before the meet, just like always. He told her to relax. So she did. Or at least, she tried.

Lee admitted she was getting “in her head” a little bit while prepping for her bar routine, the one that's currently the hardest in the world. She didn't exactly look nervous. The 15.300 the judges rewarded her for a series of intricate connections and releases tied Andrade's near-perfect Cheng vault for the highest score of the night.

Yet it wasn't Lee's brilliance that made the difference but her guts. She nearly came off the balance beam while executing a wolf turn — basically a seated spin — needed to suction cup her toes to the 4-inch slab of wood to stay on. Her score of 13.833 moved her in front of Andrade heading into the floor exercise.

Going first, Lee opted for a routine with three tumbling passes instead of four, hoping better execution would override any potential tenths she surrendered by not doing a fourth pass. Her 13.700 was steady, but it left an opening for Andrade.

The 21-year-old Brazilian, two years removed from a third surgery to repair a torn ACL in her knee, had the best floor score of the contenders during qualifying. Yet she bounded out of bounds with both feet at the end of her first tumbling pass. And her right foot stepped off the white mat and onto the surrounding blue carpet.

Needing a 13.802 to win, Andrade received a 13.666 instead. Not that she particularly cared. She wasn't even sure she would make it to Tokyo until she won the all-around at the Pan American Championships two months ago. She was in tears as she watched her country's flag raised during an Olympic gymnastics ceremony for the first time.

“This medal represents all Brazil,” she said.

The gold, however, remains in possession of the Americans. Lee's victory marked the fifth straight by a U.S. woman, with the past three Olympic champions all being women of color.

Biles and 2012 gold medalist Gabby Douglas are Black. Lee's parents are Hmong, an ethnic group who have historically lived in the mountains of Southeast Asia. Lee's parents emigrated from Laos to Minnesota, which has the largest concentration of Hmong in the U.S. A large group of friends and family gathered in Minneapolis to watch her make history. She hopes the image of a Hmong standing in front of the world and on top of her sport resonates in a community she sometimes feels can be too restrictive.

“I want people to know that you can reach your dreams and you can just do what you want to do," she said. "Because you never know what’s going to happen in the end.”