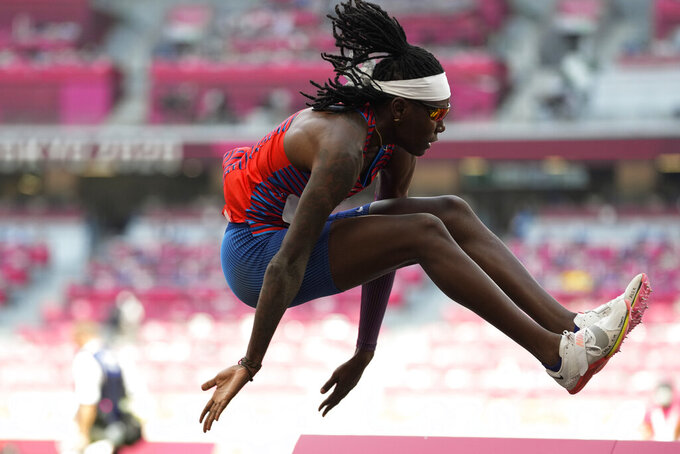 Brittney Reese, of United States, competes in a qualification for the women's long jump at the 2020 Summer Olympics, Sunday, Aug. 1, 2021, in Tokyo. (AP Photo/Martin Meissner)

TOKYO (AP) — One of the best rivalries on the track moves into the spotlight on Day 10 of the Tokyo Games and takes a step closer to a big finish when United States teammates Sydney McLaughlin and Dalilah Muhammad size each other up in the semifinals of the women's 400-meter hurdles.

Here are some things to watch Monday (all times Eastern):

RIVALRY ON THE TRACK

For more than a month now, McLaughlin has been the proud holder of the world record in the 400-meter hurdles. Her mark of 51.90 seconds could be broken at the Tokyo Games — maybe even by her.

Probably not Monday, though, in the semifinals of the competition. She and her biggest rival, teammate Dalilah Muhammad, are in different heats. They each hope to make it through to the final and set the stage for what could be another record-breaking day.

This time, with an Olympic gold medal on the line.

Each time they’ve met at a big competition, the record has fallen. Muhammad set the mark at nationals in 2019 and then again at the world championships in Doha. McLaughlin put her name at the top of the list with her race at the U.S. Olympic trials.

“Anything’s possible,” said McLaughlin, who turns 22 on Saturday. “It’s a really great group of girls, so I wouldn’t put it past anybody to go out and do it.”

NBC's primetime coverage also includes a beach volleyball quarterfinal. Americans April Ross and Alix Klineman are hoping to be there, but first they have to get past Cuba in the round of 16. The first day of the knockout round was not kind to the U.S., with Beijing gold medalist Phil Dalhausser and his partner Nick Lucena ousted by Qatar and Olympic first-timers Sarah Sponcil and Kelly Claes losing to Canada’s Heather Bansley and Brandie Wilkerson.

The late night crowd can catch a men's basketball quarterfinal matchup between the United States and Spain.

Spain is the reigning basketball world cup champion and one of them won’t make the medal round at the Tokyo Games.

IN OTHER NOTABLE ACTION:

The women's soccer semifinals are on for the early risers. After beating the Netherlands on penalty kicks in the first knockout round, the U.S. women face Canada in a match live on USA Network at 4 a.m. The other quarterfinal between Sweden and Australia follows at 7 a.m. If Sweden and the U.S. advance it would set up a gold medal rematch of the opening game in which Sweden beat the World Cup champions 3-0.