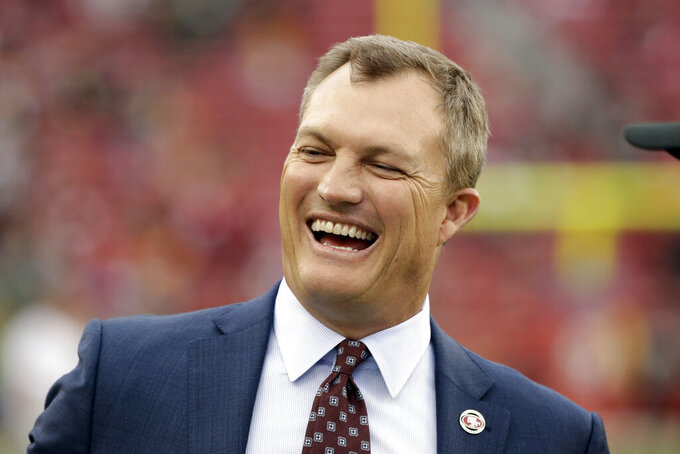 FILE - In this Jan. 19, 2020, file photo, San Francisco 49ers general manager John Lynch laughs before the NFC Championship NFL football game against the Green Bay Packers in Santa Clara, Calif. Lynch has agreed to a new five-year contract with the San Francisco 49ers that will keep him locked up through the 2024 season. (AP Photo/Marcio Jose Sanchez, File)

SANTA CLARA, Calif. (AP) — General manager John Lynch has agreed to a new five-year contract with the San Francisco 49ers that will keep him locked up through the 2024 season.

A person familiar with the deal says the sides agreed on Wednesday to replace the original six-year contract Lynch signed in 2017. The person spoke on condition of anonymity because the contract hadn’t been announced. NFL Network first reported the deal.

The new deal for Lynch comes about six weeks after coach Kyle Shanahan replaced his original six-year deal signed in 2017 with a new six-year contract that takes him through 2025.

Lynch and Shanahan teamed to oversee an impressive overhaul of the Niners the past few seasons, leading to a trip to the Super Bowl last season. Lynch was named executive of the year last season by the Pro Football Writers Association of America for his work.

Lynch and Shanahan took over following a 2-14 campaign under general manager Trent Baalke and coach Chip Kelly. The Niners had gone through three coaches in as many seasons and posted a 15-33 record from 2014-16.

The progress under the new regime wasn’t immediate. San Francisco lost its first nine games in 2017 before finishing 6-10 thanks to a five-game winning streak under new quarterback Jimmy Garoppolo.

A season-ending knee injury to Garoppolo derailed the 2018 season and led to a 4-12 record.

But San Francisco was able to draft Defensive Rookie of the Year Nick Bosa and add key pieces like edge rusher Dee Ford, linebacker Kwon Alexander and receivers Emmanuel Sanders and Deebo Samuel last season. That led to a 13-3 record and an NFC championship.

The 49ers then led the Super Bowl against Kansas City 20-10 in the fourth quarter before losing 31-20.