AP WAS THERE: 1996 Atlanta Olympics 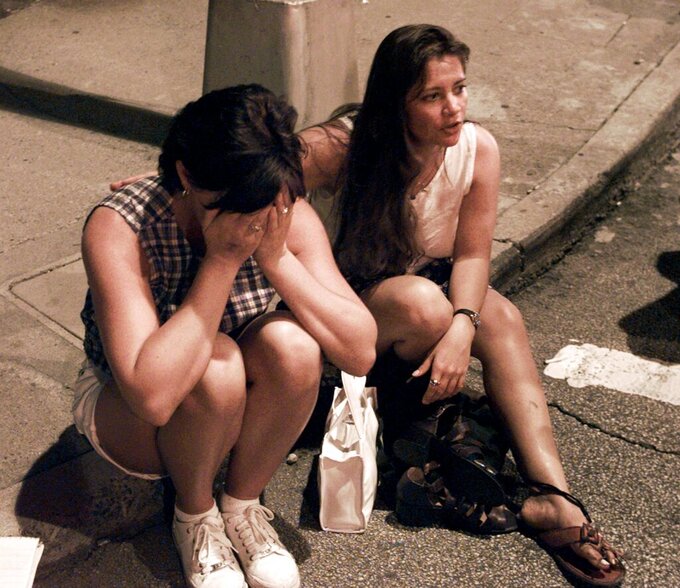 FILE - In this Saturday, July 27, 1996, file photo, Shelly Martin of Spokane, Wash., left, and Roselia Norwood of Hawaii react after an explosion occurred in Centennial Park in Atlanta during the 1996 Summer Olympics. (AP Photo/Doug Mills, File)

EDITORS — With the Tokyo Olympics postponed for a year because of the coronavirus pandemic, The Associated Press is looking back at the history of Summer Games. This story was sent on the AP wire in the early-morning hours of July 27, 1996, as the city of Atlanta awakened to news of a deadly bombing in Centennial Olympic Park. The story, an early take on the first terrorist attack at the Olympics since the 1972 Munich Games, is reprinted here as it ran using the contemporary style, terminology and including any published errors.

ATLANTA — A bomb ripped through a crowded park in downtown Atlanta early Saturday, killing at least two people and wounding more than 100 in the first terror attack at the Olympics since Munich 1972.

``We will consider it an act of terrorism until information should should arrive to the contrary,″ FBI agent Woody Johnson said.

The blast shattered windows, rocked buildings and echoed through downtown, where thousands of people have gathered every night since the Olympic Games began July 19.

The park, which is within walking distance of three major Olympic venues, was packed with people, many of whom ran through the streets in tears.

``I felt the ground shake,″ said Desmond Edwards, an Atlanta schoolteacher who witnesses the blast. ``There were rivers of blood.″

There were at least 10 athletes from Cuba and Argentina a few feet (a meter) from the blast, said Sheryly Fillmore, a friend of a Cuban judo competitor.

While people pass through metal detectors at all Olympic venues, anyone is free to walk through the park.

Officials in Atlanta said they would not halt the competition. When Palestinian terrorists attacked Israeli athletes and coaches, organizers suspended the Games for mourning.

``The Games will go on,″ said Francois Carrard, director general of the International Olympic Committee.

U.S. Olympic Committee spokesman Mike Moran said, ``The athletes in the village all were up and watching on television at one time or another. Word spread fairly quickly.″

Hospitals said the injured included people apparently hit by shrapnel. A doctor said he saw a lot of fractures and one person with a finger blown off.

Authorities cordoned off the area for several blocks around, turning downtown into a ghost town. Fatigue-clad soldiers walked the streets and barriers were set up in front of hotels. Police swept the area with bomb-sniffing dogs.

Officers locked arms and formed lines to drive back tourists and journalists. They said the security net was to protect bystanders from further explosions.

The bomb went off about 1:25 a.m. (0525 GMT) as thousands of revelers were celebrating at a free open-air concert by the band Jack Mack and the Heart Attack.

``The security guard found a knapsack or nylon bag and didn’t like the way it looked,″ said Mark Smith, who was mixing the music for the concert in a light and sound tower where the guard was stationed. ``The police started clearing the area. I was 50 feet (15 meters) away and there was a policeman about 30 feet (9 meters) away from it.

``I saw the cop right in front of me take a huge piece of shrapnel. He got hit bad. One guy threw a towel on his head. I poured water on him to wash away some of the blood. He was lying face down and he wasn’t moving. I saw 10 pockets of people hit by what appears to be shrapnel.″

Police Officer Ron Otero, who was patrolling in the park, said he was about 50 yards (45 meters) away when the blast hit.

``I saw lots of smoke and heard a big explosion, very big — it was like a shock wave hit us,″ Otero said. ``The next thing you saw was people on the ground.″

Snenetricus Warford said the explosion appeared to come from a garbage can: ``People were dancing, watching the concert, having a good time and it went up. I saw flames.″

Six officers with the State Olympic Law Enforcement Command were among those injured, spokeswoman Pamela Swanson said. SOLEC is in charge of organizing the 4,500 state law enforcement officials who run security at about 23 state-owned venues.

Gary McConnell, director of the State Olympic Law Enforcement Command, told NBC television that authorities were investigating the possibility that a pipe bomb caused the blast.

FBI spokesman Jay Spadafore said the deadly package was in a trash can. He would not provide more details.

While Johnson said he had no information on any other bombs or threats in the area, ``we have some indication that there may be some suspicious packages, but we will sort those out quickly.″ CNN reported that authorities found two other bombs in the park after the explosion.

The last time terror struck an Olympics was at the Munich Games in 1972, when Palestinian terrorists broke into the Olympic village, killed two Israeli athletes and took another nine hostage. The terrorists, who sought the release of 200 prisoners jailed in Israel, got into a gunfight with West German authorities at a military airport. Sharpshooters killed three of the terrorists, and in the ensuing battle all nine athletes, two terrorists and a policeman were killed.

A memorial service was held in the Olympic Stadium and the games were suspended for 34 hours. Security at the games became a major concern, leading up to the extraordinary measures that were already in place at the Atlanta Games.

In Atlanta, Centennial Olympic Park was opened just a week before the Olympics began, built on an area formerly occupied by vacant and decrepit buildings. The 21-acre (8.5 hectare) park has sponsor’s buildings, concert stages and exhibits.

At Hartsfield Atlanta International Airport, where security had already been tightened due to the Games, authorities were checking trash cans for suspicious packages, said airport spokeswoman April Majors.