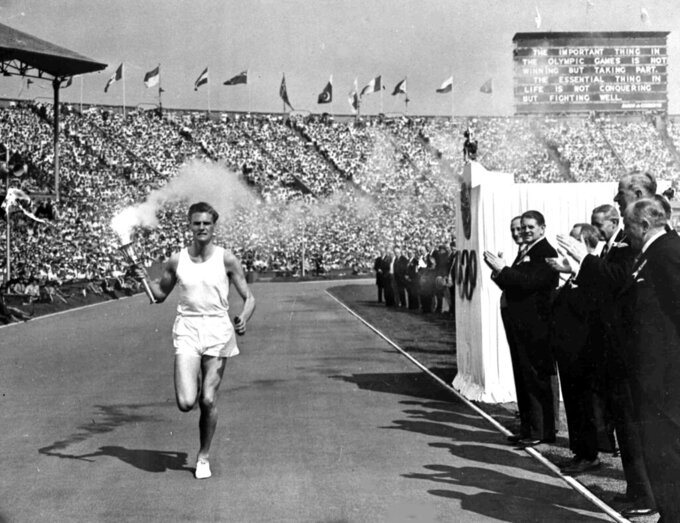 FILE - In this July 29, 1948 file photo, British athlete John Mark holds the Olympic Flame aloft as he makes his circuit of the Olympic track during the opening ceremony of the XIV Olympiad, in Wembley Stadium, London. London was still cleaning up bombing damage from World War II when it staged the Olympics in 1948. Britain was also struggling financially; food, clothing and gas were still being rationed. The athletes had to bring their own towels and, with housing in short supply, were accommodated in schools and Royal Air Force camps. The games were organized in less than two years, and despite the tiny budget it was a success, its legacies including greater sporting opportunities for women. (AP Photo, File) 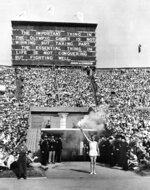 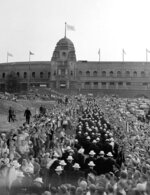 After the controversial 1936 Berlin Games, it was important to believers in the Olympics that the first games after World War II be held without political and racial propaganda.

Who better to host them then than the British, sticklers for fair play and ‘amateurism?’ Besides, the British said they were owed the games after their 1944 hosting rights were canceled by the war.

By 1944, when the war's outcome was increasingly certain, the IOC and British had already begun thinking of the 1948 Games. When confirmation came, London had less than two years to pull it off.

Lord Burghley, a former Olympic hurdles champion and MP, led an organizing committee of men who all had titles or high military rank and could afford not to be paid. The media criticized the organizers, asking them to justify every decision while Britain was practically bankrupt.

Central London and the docks remained scarred from bombs and missiles. There were damaged buildings and roads, vacant lots, and lots of rubble. St. Paul's Cathedral seemed to be on an island among craters.

The organizers had a budget of 730,000 pounds ($31 million in today's terms), relying on corporate sponsors and sales of tickets and souvenirs. They asked for help from other Olympic nations. Timber came from Finland and Sweden for the basketball court. Gymnastics equipment came from Switzerland. Two Douglas Fir trees came from Canada for diving boards.

Britain was rationing food, clothing and fuel, so athletes were asked to bring their own towels. An Olympic village was deemed too expensive, so athletes stayed in military camps and schools.

German prisoners of war yet to be repatriated were used to build a road -- Olympic Way -- and pedestrian tunnel from the nearest subway station to Wembley Stadium.

More than 70 nations were invited, including the Soviet Union, which wasn’t part of the Olympic movement. But when the Soviets began blockading Berlin a month before the games and tried to send a weightlifting team, they were rebuffed.

The IOC wanted Germany and Japan invited but the British government refused.

Palestine was coming until the invite was withdrawn by the IOC after Israel declared independence two months before the games, sparking another Middle East war. To avoid an Arab boycott, the IOC said Israel was not invited because it didn’t have an Olympic committee.

There were some innovations: Starting blocks and a photo finish camera were introduced. It was the last Olympics to give medals to artists in sculpture, architecture, poetry and music.

What came to be known as the Austerity Games were remembered as friendly and fun, and even turned a profit of more than 29,000 pounds.

Track great Emil Zatopek told a British competitor: “After all those dark days of the war, the bombing, the killing and the starvation, the revival of the Olympics was as if the sun had come out. Suddenly there were no more frontiers, no more barriers. Just the people meeting together. It was wonderfully warm to feel.”

The star of the games was Fanny Blankers-Koen of the Netherlands, considered over the hill at 30 even though she owned six world records in sprints, hurdles, high jump, long jump and relays. She was also a mother of two in the days when women were assumed to stop competing when they had children. IOC rules limited her to four events, and she won all four in mud and rain: 100 and 200 meters, 80 hurdles, and 4x100 relay, setting one world and two Olympic record times. She remains the only woman to win four gold medals in track.

DECATHLON IN THE DARK

Bob Mathias was 17, the youngest in the decathlon field. He did his first decathlon only four months earlier, and been out of high school only two months. It rained both days, and the events were still ongoing after dark. The stadium had no floodlights, so a friend shone a flashlight on the pole vault bar. For the javelin, cars were parked around the infield so their headlights illuminated the foul line. Mathias splashed around the deserted stadium for the 1,500 and finished nauseated and with feet cramping — but he’d won the gold medal. He was asked how he would celebrate: “I’ll start shaving, I guess.” Mathias won the 1952 decathlon gold medal.

Hands that so elegantly played the piano earned Micheline Ostermeyer gold medals in shot put and discus. The niece of Victor Hugo won a concert pianist competition at the Paris Conservatory of Music in 1946 and graduated with high honors three months before the London Games. “Sport taught me to relax, and the piano gave me strong biceps,” she said. Just weeks after throwing her first discus, Ostermeyer's winning distance of 41.92 meters scared officials that it might hit someone. After the shot put, she gave a Beethoven concert at her college accommodations. She added a bronze in the high jump.

Equestrian was restricted to male commissioned officers. Midway through the dressage team competition, Commandant Hector of France, the secretary general of the international federation, noticed Swedish rider Gehnall Persson was wearing a sergeant’s cap. He helped Sweden win by nearly 100 points. But eight months later Sweden was disqualified because Persson was not an officer and Sweden had to return the medals.