Back in Lane 8: Van Niekerk's struggle to reach the Olympics 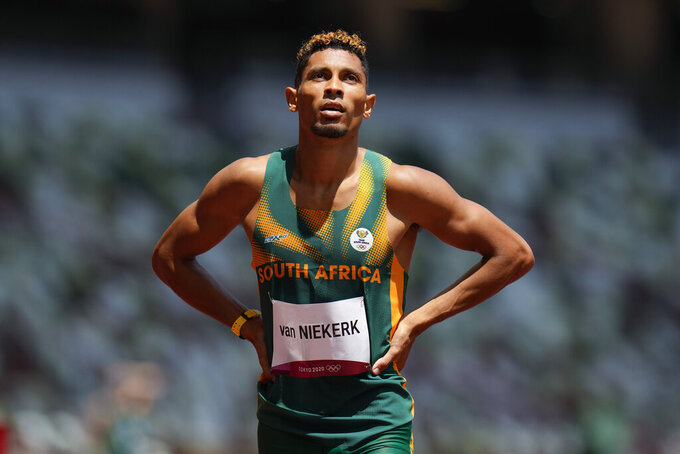 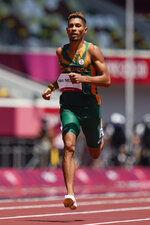 The place where no 400-meter runner wants to be, and where Wayde van Niekerk thrives.

The South African was out in the far lane with little hope at the last Olympics when he won gold and wiped out Michael Johnson's 17-year-old world record in one, pure lap of the track. It thrilled everyone who watched it, including a guy from Jamaica named Usain Bolt.

Images from that evening five years ago in Rio de Janeiro have become Olympic highlight reel must-haves. An untouchable van Niekerk running to a world record despite the lane handicap and not being able to see any of the other runners inside of him. And Bolt, the greatest himself, throwing a hand over his open mouth in awe of the achievement.

That's only half of van Niekerk's Lane 8 story.

A year later, van Niekerk, then world champion to go with Olympic champion and world-record holder, walked off a rugby field in his home city of Cape Town with something wrong with his right knee.

He'd just twisted it playing a celebrity tag rugby game. It didn't feel too bad at first, but the full diagnosis was devastating: A torn anterior cruciate ligament, a torn meniscus, and an urgent need for reconstructive surgery.

“You’re taking me all the way back now,” van Niekerk said in an interview with The Associated Press at the Tokyo Olympics. “I’m in a mental space where that’s so far and so distant from where I am now.

“Thinking back, obviously the first thing you want to do is try and see positive, try to see a bit of hope. But it became a very patient battle.”

The man who's run around a track faster than anyone on earth had to go back to the very basics of moving to rehabilitate and save his career.

Van Niekerk had to learn how to stand up with a crutch, he said. He had to learn to walk again on that rebuilt knee, to jog, and then to take long strides.

When Steven Gardiner took his world title in Qatar two years later in 2019, van Niekerk had just about started re-learning how to run. The progress was grinding and incremental and it came with setbacks.

A journey of “faith,” is how van Niekerk described it.

Apart from the gold medal, van Niekerk said he hasn't specifically saved anything from his indelible run in Rio. Not his vest, or his running shoes, or even many photos of the moment.

“I don’t get very attached to all of that, to be honest with you,” he said.

What he needed to keep most from Rio, he stored upstairs.

Out on the fringe of his sport for three years and unable to compete against others, van Niekerk's battle was a lone one. He had to whittle it all down to just him and the target he'd set — defending his title at the Tokyo Olympics.

“That was one of the massive lessons that I’ve learned myself during this process ... how important it is for you to get stuck into focusing on your own race and staying in your own lane," he said. “It is such a cliche and it’s become such a cliche for me these last few years because that was my entire Lane 8 story (from Rio). I somewhat inspired myself."

Van Niekerk is back at the Olympics and “feeling good and feeling strong and feeling optimistic for the future again,” he said.

Still, he ran only two 400 races this year to build up to the Olympics, and has run a total of five competitive races since the injury four years ago. His best time in 2021 is only the 10th-fastest in the world, so he's almost an outsider.

“The world should actually hope that I’m not put in Lane 8 again this time around,” van Niekerk said.

He was only half joking.