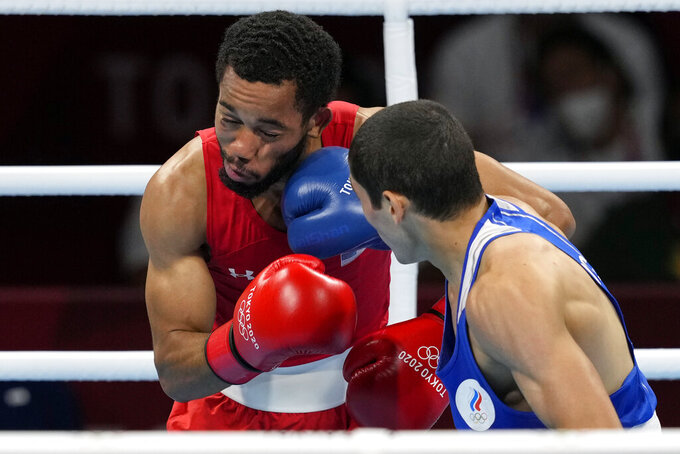 Albert Batyrgaziev, of the Russian Olympic Committee, right, connects with a punch to Duke Ragan, of the United States, during their final round feather weight 52-57kg final boxing match at the 2020 Summer Olympics, Thursday, Aug. 5, 2021, in Tokyo, Japan. (AP Photo/Themba Hadebe)

And though Batyrgaziev knows he made history and both of these fighters greatly boosted their pro careers with Olympic success, he thinks the distinction between professional and Olympic boxing is weak — and getting weaker.

Batyrgaziev and Ragan became the first two professional boxers to meet in a Games final at the Kokugikan Arena. Batyrgaziev, who is 3-0 as a pro boxer, escaped with a 3:2 victory by employing a strategy that was much more Olympic than his American opponent's approach.

Batyrgaziev, a teenage kickboxing champion from Dagestan who picked up boxing just five years ago, pressured Ragan from the opening bell in the final. He largely dominated the first round with aggression and high punch volume — the two traditional keys to persuading amateur judges.

Meanwhile, Ragan needed nearly half of the three-round fight to find his game. The 4-0 pro knows his approach is more typical to the professional game, where more rounds allow more counterpunching and more gradual buildups to action.

The 23-year-old from Cincinnati spoke throughout the tournament about his struggle to override his professional mentality in time to win these brief bouts.

“I feel like his conditioning won him the fight,” Ragan said. “I started finding my rhythm later in the fight, but it was too late then. It’s only three rounds.”

Ragan learned he was headed to the Olympics only in early June when the Boxing Task Force overseeing the Tokyo tournament finalized its qualification processes. He became the 12th U.S. medalist in the featherweight division, and he wouldn't change his career path.

He also realizes he has greatly helped his promoters at Top Rank by giving himself a new title that will be attached permanently to his name for the rest of his boxing career: Olympic silver medalist Duke Ragan.

“I take that and run with it,” Ragan said. “It was a blessing to be here. I’m glad that I was a professional. A little bit more experience, even though I didn’t get the belt. But it’s all good.”

Pros have been allowed to qualify for the past two Olympics, and the three pros who competed poorly in Rio de Janeiro have been followed by more than 40 in Tokyo. The pros have again failed to dominate — in fact, the most experienced professionals in the field have all been eliminated without medals.

Now that Batyrgaziev and Ragan have finished the Olympic portions of their careers with the two biggest medals, bigger paydays are in store — and even better, they've now got a history. When they were asked if they would be open to a professional rematch with more rounds and fewer competitive obstacles, both fighters loved the idea.

“If that was to happen, I really look forward to getting revenge," Ragan said. “It would be a big headline, and I’m pretty sure that everyone that tuned into the Olympics would want to see that again, especially on a bigger level.”

Nobody left in the Tokyo field has more than the eight pro fights of Uzbek super heavyweight Bakhodir Jalolov, who fights USA Boxing's Richard Torrez Jr. for gold in the final fight of the Games on Sunday.

Batyrgaziev's win is a welcome breakthrough for the Russian team, which qualified 11 fighters for Tokyo. Batyrgaziev’s gold was its first after three semifinal losses ended with three bronzes, while two fighters are still in competition.

The team is rebounding from a dismal performance in Rio, where it also qualified 11 boxers but came away with only one gold medal.