Berry opens at Olympic trials: 'I want to impact the world' 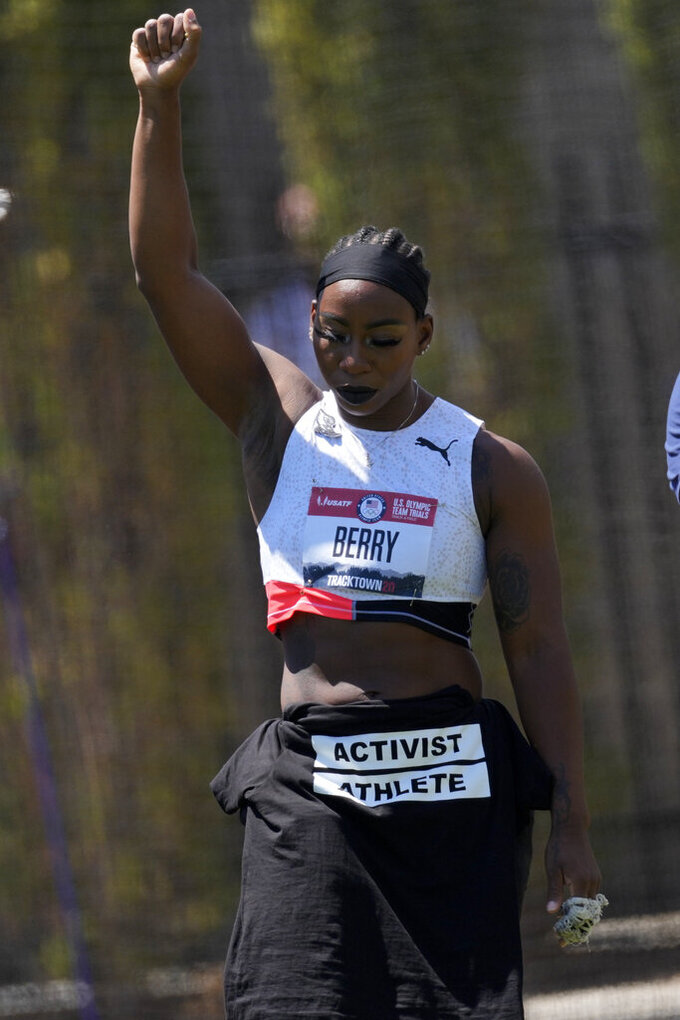 Gwendolyn Berry lifts her arm during introductions for the prelims of the women's hammer throw at the U.S. Olympic Track and Field Trials Thursday, June 24, 2021, in Eugene, Ore. (AP Photo/Ashley Landis)

EUGENE, Ore. (AP) — Gwen Berry raised her fist, then thumped it against her chest two times and set off on her quest for an even bigger stage to spread her message.

The hammer thrower, who forced the U.S. Olympic world into an uncomfortable conversation about raised fists, kneeling and other demonstrations at the games, finished sixth in qualifying at track and field trials Thursday. She'll be in the final Saturday competing for one of three tickets to Tokyo.

“Today means a lot to me,” said the 31-year-old mom, who wore a T-shirt emblazoned with the words ‘Activist Athlete.’ “My message is very powerful. I want to impact the world.”

She's hardly the only athlete using their platform to send a message.

Emma Coburn, who serves as vice president of the athlete advocacy group Athletics Association, won her ninth national title in the steeplechase and will head to her third Olympics. Coburn won her race in a meet-record 9 minutes, 9.41 seconds, then dedicated the victory to her mother, who was diagnosed with Stage 4 colon cancer late in 2019.

“To have her be well is even more special than going to Tokyo,” Coburn said. “Sharing this with her means everything.”

Allyson Felix also ran Thursday. Felix, who qualified for the 400 meters four nights earlier, made it through the first round of the 200. Because of the way the schedule is set, she wouldn't be able to run both distances in Tokyo, but that wasn't on her mind as she scooped up her 2-year-old toddler, Cammy, and headed out of the track.

“I know it’s going to be difficult, but trying to sharpen myself up a little bit and just keep going," said Felix, who has been speaking out for moms in the wake of her rupture with Nike over the company's pregnancy policies.

Other athletes, after more than a year of empty stands and stringent COVID-19 protocols, were happy simply to have an audience to watch them run — in this case the fans in the half-full stands at Hayward Field.

“It felt like a big hug with everyone cheering," Raevyn Rogers said after her 800-meter qualifier.

The best contest of the night was the women's shot put final, where Raven Saunders, decked out in a green Hulk mask, broke the meet record with a throw of 65 feet-5 inches (19.96 meters), only to watch Jessica Ramsey top that mark a few minutes later at 66-0 1/4 (20.12).

Berry's next chance to put on a show will come in the hammer finals Saturday afternoon, when the forecast high is 102 (39 Celsius).

Her opening gestures Thursday, which came as she was introduced to a crowd of a few hundred watching the hammer area just outside the main stadium, wouldn't have been news were it not for the voice she has found since she raised her fist on the medals stand two summers ago at the Pan-Am Games in Peru.

After her demonstration in Lima, Berry received a yearlong probation for violating international rules that ban protests and demonstrations inside the lines.

But last year's summer of violence in the aftermath of the killing of George Floyd sparked changes. The U.S. Olympic and Paralympic Committee said it would not enforce the ban at trials this year and would not sanction athletes who violate the IOC's Rule 50 in Tokyo.

Berry has frequently spoken about her plans to use the platform in Tokyo, and anywhere else she has an audience.

Berry's qualifying throw of 232-1 (70.74) fell almost 20 feet short of her season best. Some of her biggest competition comes from her own country. Four of the top five throws of 2021 have been made by Americans, including world champion DeAnna Price, Pan-Am Games runner-up Brooke Andersen and Janee’ Kassanavoid.

Some might feel the pressure for Saturday's finals. Berry doesn't look at it that way.