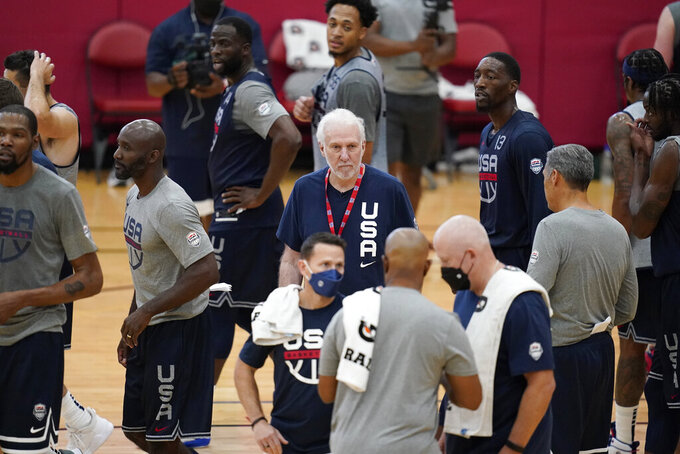 Gregg Popovich knows he doesn’t have to spend a whole lot of time teaching the game of basketball to his U.S. Olympic players.

His top priority right now: Making those players a team.

That process is officially underway, with the Americans holding their first practice together Tuesday in Las Vegas to prepare for an Olympic Games that begin in less than three weeks. Popovich’s message in the first team meeting on Monday night and in the first practice on Tuesday was simple and similar, in that he wants the unit to find a way to jell quickly — knowing that many of the international teams they’ll face at the Olympics have played together for years.

“We’ve got to take advantage of their abilities, their strengths and play together, play for each other, with one thought in mind,” Popovich said. “That’s winning the whole deal.”

This is the first Olympics for Popovich as head coach. He coached the U.S. at the Basketball World Cup in China in 2019, taking a team that was put together after about three dozen invitees and commitments backed out of playing. The result was a seventh-place finish, the worst ever for the U.S. men in a major international competition.

This roster is different. It has a past NBA Finals MVP in Kevin Durant. It has players with NBA championship rings like Durant, Draymond Green and Kevin Love -- a list that will grow after the NBA Finals since three U.S. Olympians are currently playing in that Milwaukee-Phoenix matchup.

“They are bona fide big-time players, so they’re not here to develop their individual games,” Popovich said. “They’re here to come together, become a team, fall in love as quickly as possible, and want it as badly as foreign teams want it.”

Players — nine of the 12 on the Olympic team anyway, the exceptions being Milwaukee teammates Khris Middleton and Jrue Holiday, plus Phoenix’s Devin Booker, all absent because they’re playing in the NBA Finals — arrived in Las Vegas on Monday, were taken to their hotel to get settled in and take their first coronavirus test, then gathered for a team meeting in the evening.

Popovich greeted them all warmly, then started talking about the challenge that awaits.

“We know what we're supposed to do," U.S. center Bam Adebayo said.

Practices started Tuesday and will continue through the end of the week. The U.S. plays its first international friendly on Saturday against Nigeria, and they’ll be spending most waking hours together over the next few weeks -- which is exactly what Popovich wants.

“We’ll have to spend a lot of time together,” Love said. “It’s just going to help nurture and foster some great relationships on the floor and that’s going to, I think, bode well for what we’re going to do out there.”

U.S. forward Jayson Tatum of the Boston Celtics played his college basketball at Duke, for former Olympic coach Mike Krzyzewski, and now will play for Popovich at the Tokyo Games. Tatum also played for Popovich at the Basketball World Cup in China two years ago and said one aspect of the coach’s personality shocked him.

“He has an amazing sense of humor,” Tatum said. “I guess the casual fan sees the person who does those interviews postgame, but that’s not the case of who he is at all. I absolutely love spending time with him and now building a relationship with him. I’m just really fortunate to say I played under Pop and Coach K.”

The U.S. won the last three Olympic gold medals under Krzyzewski, and now it’s Popovich’s turn. The U.S. will be favored, and remains the world’s No. 1-ranked team by FIBA. Day 1 was about getting some basic offense and defense installed — “trying to invent the wheel will not work," Popovich said — and establishing how the Americans want to play.

After that, it was time to resume the team-building.

“They’re sacrificing a lot,” Popovich said. “After the year in COVID — actually more than that — to leave their families, and to commit to represent their country at this point I think is really laudable and a great sacrifice.”