Captain America: Steffens hoping to lead US to another gold 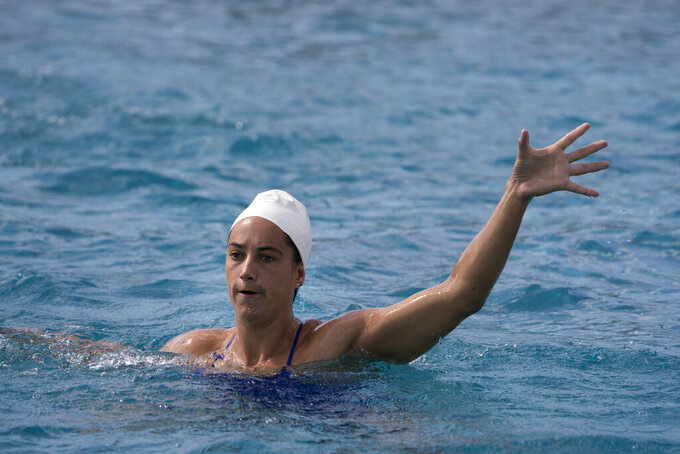 LOS ALAMITOS, Calif. (AP) — For more than a decade, Maggie Steffens has been there for the U.S. women’s water polo team.

For her grieving coach after his brother died.

For an injured teammate at a hospital thousands of miles from home.

And for her sport, leading a run that includes an unprecedented two consecutive Olympic gold medals — with the bid for No. 3 coming at the Tokyo Games.

“There’s definitely fear of failure,” Steffens said. “I don’t want to let down my teammates. That, for me, is one of my biggest fears. I hate letting people down.”

It doesn’t happen very often. The 28-year-old Steffens scored a total of 38 goals over the last two Olympics, winning the MVP award for each one. She is a three-time world champion, to go along with three NCAA titles from her time at Stanford.

So when COVID-19 pushed back the Tokyo Games, and all the U.S. could do was train and practice and wonder if there would be an Olympics at all, Steffens was, well, Steffens.

“During a pandemic I think everyone lost a little bit of passion for sport, and for our sport and this process,” U.S. coach Adam Krikorian said. “I'm not afraid to admit that. Even myself included. But I'm not sure she lost the passion."

Nope, not Steffens. Letting up would mean cheating the game. Her family's game. The game that gave her so much, that she is still trying to repay.

Heading to Tokyo next month, she belongs on the short list of Olympic athletes who just might be the best to ever play their sport. Even if the pride of Danville, California, isn't all that comfortable with that title.

“I think people can say what they want and everyone has a right to their own opinion, but for me, I wouldn’t be here if I thought I was the greatest of all time,” she said between practices at the Joint Forces Training Base in Los Alamitos. “I wouldn’t still be training. You know, because to me, I still have so much more to get better."

For everything Steffens does in the pool, what she does out of the water might be just as important. She became team captain in 2014, and that role took on some added significance while the U.S. served as its own opponent for 15 months before it swept a three-game series against Canada in May.

The stretch without games presented a challenge for the leadership skills of Steffens, who has shown a deft touch and perfect timing in a variety of situations over the years.

Krikorian lost his brother, Blake, right before the 2016 Olympics. He flew home to be with his family in California and then returned to Rio de Janeiro before the United States' first game.

Hiding behind a pair of sunglasses, an emotional Krikorian talked about his grief after an opening 11-4 victory over Spain. He leaned over at one point, weighed down by his sadness.

That's when Steffens walked up, put her hand on his back and offered a consoling smile. Krikorian assured her that he was OK, but Steffens stood right beyond his right shoulder until he was done.

“She's the protector of all, in some ways,” Krikorian said in the run-up to this year's Olympics. “I do remember that moment, and she was protecting me.”

A captain, and her coach.

Kaleigh Gilchrist got hurt when a nightclub balcony collapsed while the U.S. was celebrating its third straight world championship in 2019 in South Korea.

Gilchrist had some serious lacerations on her left leg, and she implored Steffens to stay with her.

“I was kind of fading in and out, loss of blood and shock and stuff, and I just remembered, like ‘Maggie, don’t leave me,’” Gilchrist said. “I feel so comfortable with her."

Steffens got a ride to the hospital and joined teammate Paige Hauschild at Gilchrist's side. They stayed as long as they could, practically until the team flight back to the United States.

A captain, and her teammate.

“I think Maggie was pushed into a leadership role at a young age,” Gilchrist said. “And I think there (are) some ups and downs that came with that. But I think the older she’s getting, the more mature she is.”

Steffens is the youngest of four siblings — part of a Bay Area family with deep roots in water polo. Her father, Carlos, played at the University of California and competed for the Puerto Rican national team. She has several relatives who played for the Bears, but she followed her older sister, Jessica, to Stanford, and they were teammates when the U.S. won gold in London.

“Maggie is someone who really does a lot of the diligent work of what it means to be an elite anything,” Jessica Steffens said. “She reads books. She reads quotes. ... She writes pump-up notes to herself. She tracks her goals for herself.”

Maureen O'Toole Purcell, who won silver with the U.S. at the 2000 Olympics, said Steffens' talent was obvious right away.

“She just had that ‘it’ factor. I just knew that she was going to be great," she said. “You just knew it.”

Early in Steffens' career, after watching her score on a slick move during the Junior Olympics, Purcell turned to Jim and Carlos and declared Steffens was going to be the best player in the world someday.

“She's a student of the game. She'd watch games, she would learn, she would understand,” Purcell said. “She has just a really great water polo mind. She's always thinking three steps ahead.”

That includes thinking about the future of the sport through her work with 6-8 Sports, an analytics-based training company Steffens co-founded with former U.S. star Tony Azevedo. Steffens wears No. 6 on her cap, and Azevedo was No. 8 during his playing career.

Steffens' connection to 6-8 Sports could keep her involved with water polo long after she retires from the national team. She has thought about life after her playing career, but she doesn't sound like someone who has lost her edge just yet.

Not with Tokyo on the horizon.