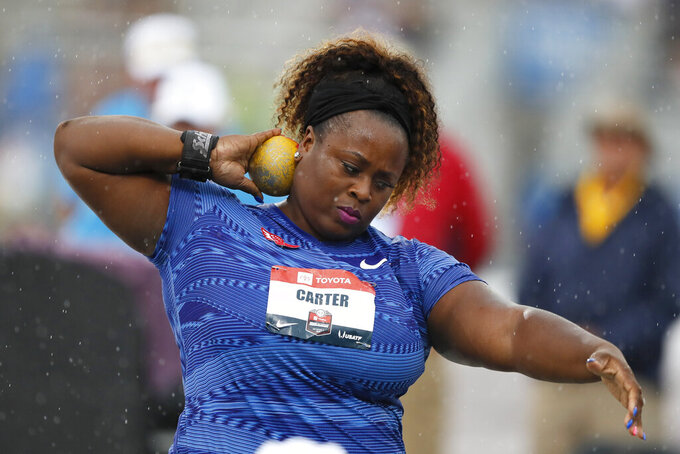 FILE - Michelle Carter sets to throw during the women's shot put at the U.S. Championships athletics meet in Des Moines, Iowa, in this Sunday, July 28, 2019, file photo. Reigning Olympic shot put champion Michelle Carter won't compete at the U.S. track and field trials after having a benign tumor removed from her right ankle. The 35-year-old will cheer on her friends and fellow competitors. (AP Photo/Charlie Neibergall, File)

She won’t be in the competition. That hurts.

But the American record holder is thankful that a surgically removed tumor on her right ankle came back benign.

The 35-year-old is relegated to cheering on her friends and fellow competitors at the U.S. Olympic track and field trials as she heals from surgery on June 3 in Dallas.

“It’s a little rough to watch the Olympic trials knowing that I will not be participating,” Carter told The Associated Press in a phone interview. “I was really excited to compete this year.

"I’m doing pretty good. Just taking everything one day at a time.”

Not long ago, she began favoring her right ankle, which would flare up “really, really bad,” she said, “and we couldn’t figure out why." Known for a high pain tolerance, Carter was set to push through the discomfort to make it to trials and, should she earn a spot, to defend her title at the Tokyo Games. As a precaution, though, she underwent an MRI, which uncovered a growth.

There was still a chance for doctors to remove the tumor so she could be ready for the shot put event, which begins Thursday. But her surgery turned out to be more complicated and took more than two hours. There also was a gumball-sized piece of bone that needed to be removed.

“I guess prior to surgery, I had already kind of prepared myself to hear something other than, 'Oh, everything was OK. You’re good,’” said Carter, a three-time Olympian. “Because I knew there was a possibility there could be more. I guess I kind of felt it in my heart that there was a possibility that there was going to be more. And I kind of already was prepared. Because the worst place for me to be in is a position of not knowing.”

Last Wednesday, she heard the news she was hoping for — the tumor was benign.

“It helped so much, my friends and family checking in on me constantly, making sure that I’m good,” said Carter, who planned to arrive in Eugene on Monday. “It’s one feeling to know that your friends and family love you. But when they get a chance to actually really show you how much they love and care about you, that’s an amazing feeling. I’ve just been enjoying being loved on from them.”

She wanted to be in Eugene to show her support. For Raven Saunders, who made the 2016 Rio team and is among the favorites to make it to Tokyo. And for Magdalyn Ewen, another fellow Nike athlete. For all of them.

“I’m so excited for these young ladies to have a chance since now there’s an extra spot open,” Carter cracked. “I’m going to enjoy it, even though it’s going to be bittersweet. But I’m there to watch other people’s dream come true.”

Don’t jump to any conclusions: She’s not retiring.

She and her dad/coach Michael Carter — a 1984 Olympic shot put silver medalist and Super Bowl-winning nose-tackle for the San Francisco 49ers — envision a few more seasons. They for sure see world championships next summer in Eugene and are locked in on the 2024 Paris Olympics, where Carter will try to recapture the title she won’t get to defend this time.

To keep her busy, Carter will work on a few of her outside track ventures — a throwing camp for youth (" You Throw Girl ") and her nonprofit One Golden Shot, which empowers and encourages youth and communities in self-awareness and confidence-building.

This week, however, is for taking in some track and field from the stands.

“I’ve been doing this for so long and next year will be 25 years of me competing and throwing the shot put,” Carter said. “That’s a long time. And so, watching the young ladies that are coming up in my event, in the sport, and just watching them have the opportunity to experience what I’ve been able to experience three times, it’s special. You work so hard for this one dream.”