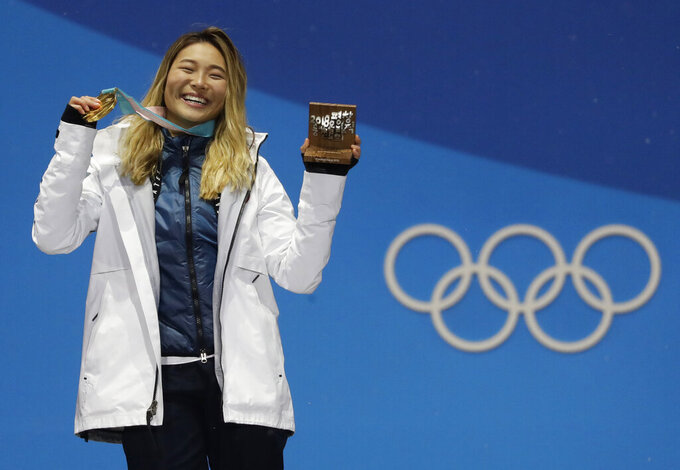 FILE - Women's halfpipe gold medalist Chloe Kim, of the United States, poses during the medals ceremony at the 2018 Winter Olympics in Pyeongchang, South Korea on Feb. 13, 2018. Kim is eyeing a second gold medal on the halfpipe on her terms at the 2022 Winter Olympics in Beijing. Kim stormed to victory as a teenager in Korea four years ago before taking an extended break. (AP Photo/Morry Gash, File)

Chloe Kim, prodigy, is no more. The same goes for Chloe Kim, political symbol. And that's a good thing for snowboarding in general and the sport's current standard-bearer more specifically.

Eight years ago, she was the halfpipe's Next Big Thing. Four years ago, the California-born daughter of South Korean immigrants arrived in Pyeonchang carrying the weight of massive expectations of not one country but two on her teenage shoulders.

She delivered with a golden run. Looking back, she wonders at what cost. Her response to the pressure back then was to channel her emotions — be it fear, anger, anxiety, anticipation — into 45 seconds of gravity-defying, boundary-pushing tricks that turned the 22-feet-high walls of the halfpipe into her personal tableau.

It was successful to be sure. For proof, check the giddy celebration at sun-dappled Phoenix Snow Park that began with Kim's mittens clasped to her helmet after stomping her victory lap.

That doesn't mean it was healthy.

So while Kim looks back with gratitude on her coronation as the face of women's snowboarding, there also is a tinge of regret for what she put herself through internally.

Even as crossover fame reserved for Olympic champions who truly have the “It Factor" (see Simone Biles, Michael Phelps and Shaun White) splashed over her, Kim questioned her lifelong love for the very thing that made her a star. She took an extended break that while technically not a retirement kind of looked and felt like it.

She returned as promised but is making it a point to do it her way this time around.

Sure, the pressure will be there as she attempts to defend her Olympic title in the foothills of the Zhangjiakou Mountains. It's how the 21-year-old plans to handle it that has changed.

The evidence came to life on the other side of the world in mid-December, when she fell not once but twice during her first two runs in the finals at a Dew Tour stop at Copper Mountain.

During the first iteration of her career, Kim might have tried to shrug off the mistakes, externally anyway, while attempting to bury her frustration. Those days are over.

“I'm just at a point now where I want to be myself and feel everything I feel and not bottle my emotions up and explode one day, which was a pretty standard practice for me a few years ago,” Kim said. “It puts me in a much better headspace.”

A place Kim found during her last trip down the pipe, where back-to-back 1080-degree spins thrust her past Queralt Castellet of Spain and Xuetong Cai of China to the top of the podium.

It's a victory she doesn't think she'd have been able to pull off under her old mindset, at least while keeping her mental health intact.

She's learned it's not only OK to not be OK, but it's also OK to tell others you're not OK, as she did in a first-person essay published by ESPN last spring in which she detailed how attacks on social media and a rise in aggression against Asian Americans and Pacific Islanders across the country took its toll on her.

Her revelation — a surprise to some because of Kim's relentlessly upbeat persona — has been an important part of her personal growth.

It's also provided her with the kind of perspective she lacked heading into Pyeongchang. Her world has become far larger than whatever happens on a 600-foot tube carved out of the side of a mountain. She took off three years, a span in which she started college, appeared on “The Masked Singer” and had a Barbie doll crafted in her image and her worldview changed.

Maybe that's why she isn't getting too worked up — or at least trying to not get too worked up — about the idea of adding a second gold to the one she claimed in Pyeongchang.

“I don't really get the whole defending thing,” she said. “I don't feel like I'm defending anything. I’m kind of just going and doing another contest. And hopefully, you know, the conditions are great and I'm able to land the run I want to.”

A run that, when Kim nails it, is still the best in the world.

“Chloe’s like a bomb,” said Castellet, who will be among Kim's main challengers, a group that includes 21-year-old American Maddie Mastro. “She’s like a fireball. She goes for it, always."

Even if how Kim goes about going for it has changed. She's the most technical women's rider in the world and one of the most progressive.

“The variations of runs she can do, and wherever she wants to put certain tricks (separates her),” said Louie Vito, a member of the 2010 U.S. Olympic team who will compete for Italy in Beijing. "You have a lot of people, but I think a lot of people are gunning for Chloe, I would say.”

NBC hasn't shied away from promoting Kim at every turn in the run-up to the Games. The blessing and the curse of Kim's immense talent is that she ultimately will be compared only against herself, the same fate that's greeted White — gunning for a fourth gold in five Olympics — every time he has returned to compete under the rings.

White, now 35, is at the end of his journey. Kim's is in the middle. A lot has happened. A lot will happen. She's intent on meeting the challenges to come on her terms and only her terms. It's the only way forward in life, gold or no gold.

“It's brought a lot of peace just knowing I can be myself 24/7 and not have to put on a front.”