Column: The Tokyo Olympics will go on, but in name only 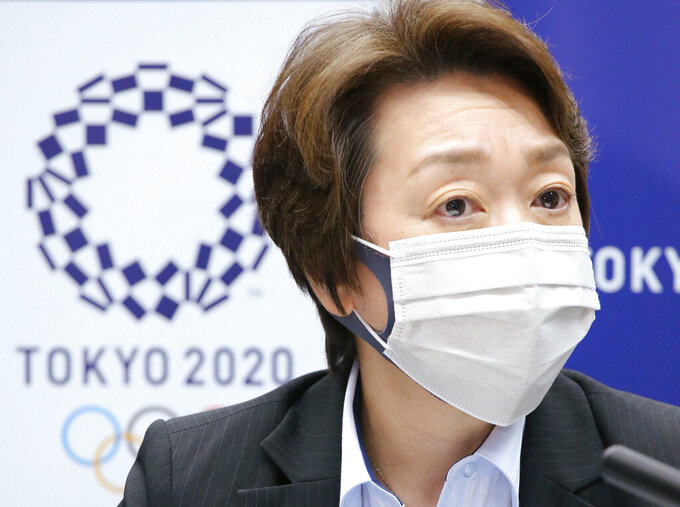 Seiko Hashimoto, the head of the Tokyo Olympics speaks during a press conference in Tokyo, Friday, April 16, 2021. Tokyo Olympic organizers are again being forced to assure the world that the postponed games will open in just over three months despite surging COVID-19 cases in Japan.(Kyodo News via AP)

In 1964, less than two decades removed from World War II, Japan used the Summer Olympics to showcase its astonishing recovery from a horrific defeat.

It was an undeniable triumph for the host nation.

This time, the Tokyo Games will be a multibillion-dollar test of survival in the midst of a lingering pandemic.

Despite the mixed messages coming from top officials, not to mention the steadfast opposition of the vast majority of Japanese citizens, these Olympics will take place this summer.

There's too much money at stake for there to be any other outcome.

But it's clear this will be an Olympics in name only, stripped of the joy and charm and lofty ideals that make it a tradition unlike any other (sorry, Masters), leaving only the stench of well-deserved cynicism.

Forget about tens of thousands of people from every corner of the globe transforming the streets of Tokyo into a potpourri of humanity. Foreign fans are not allowed.

Forget about the athletes hanging around to absorb the culture and cuisine of the hosts once their competitions are over. They're being told to arrive late and get out of town as soon as possible. (Of course, Ryan Lochte probably wishes he had followed that advice in Rio.)

Forget about the stories that would've been shared in the years to come — the frenzied bartering of the pin traders, the embarrassed remembrances of far too much money dropped in the Olympic superstore, the chance encounter that opened your heart to someone who looked and sounded different.

For Katie Ledecky, one of the most enduring memories of her two previous Olympics was having NBA stars from the U.S. men's basketball team turn up in the stands when she was swimming for gold.

In 2016, it was Kevin Durant, Kyle Lowry, Draymond Green, Klay Thompson, DeMarcus Cousins and DeAndre Jordan who transformed into awestruck fans as they cheered on Ledecky and Michael Phelps.

Afterward, they all posed for pictures.

“They typically come to at least one of our sessions at the Olympics,” Ledecky said ruefully. “I know this year it probably won’t be able to happen.”

With coronavirus cases surging in Japan, the prospect of canceling an Olympics that already has been pushed back a year was raised again this week by a leading politician.

Toshihiro Nikai, the No. 2 person in the ruling political party, was asked during an interview if cancellation was still an option.

“Of course,” he replied, adding that if the Tokyo Games piled on to the misery already wreaked by COVID-19 "there would be no meaning to having the Olympics.”

But the swiftness with which Nikai backtracked and a bunch of other powerful officials jumped in to say his comments were off the mark only solidified the reality that these games are going forward — no matter what happens in the next three months.

But Hashimoto acknowledged that Nikai has a right to be concerned, and that sort of thinking is right in line with a Japanese public that has polled as high as 80% against holding the Olympics during the pandemic.

“His comment has reminded us of how tedious it was for us to feel confident or be fully prepared for delivering the games," Hashimoto said.

Though there will surely be socially distanced fans in the stands — Japan has allowed people to attend sporting events since last summer — these Olympics will essentially be a made-for-TV event.

Everyone from the athletes and coaches to officials and the media will be on virtual lockdown during their time in Japan, restricted largely to the stadiums and arenas where the events are held and the rooms where they will lay their heads at night.

That is good enough for the International Olympic Committee, which relies on international broadcast fees for nearly three-fourths of its revenue. Besides, TV is the conduit through which nearly everyone except a lucky few gets to experience the games, so a cancellation would leave a giant void in the summer programming schedule.

Frankly, its understandable that Japanese officials want to press forward, considering how much the country has laid out to prepare for the world's grandest boondoggle — at least $15 billion officially, with audits suggesting the actual figure might be twice as much.

And, of course, the athletes desperately want to compete, no matter what restrictions are are placed on them. This is a moment that usually comes around only once every four years, and they've already had to tack on an extra year of training, preparation and expense just to take part in the Tokyo Games.

When a British newspaper suggested in January that the Olympics might be canceled, U.S. gymnastics star Simone Biles undoubtedly expressed the mindset of all her fellow athletes.

“I’ll basically do anything at this moment,” Biles told NBC. “Whatever they say they want us to do, I’m in 100%, because I’ve been training so hard, and I’ve just been so ready.”

Sadly, no matter how the IOC tries to spin it, everyone in the Pandemic Games will be walking on eggshells until the flame is extinguished on Aug, 8.

Only then can the celebration really begin.

Or, more likely, nothing more than a giant sigh of relief.