With COVID-19 surging, swimmers return to racing in the US 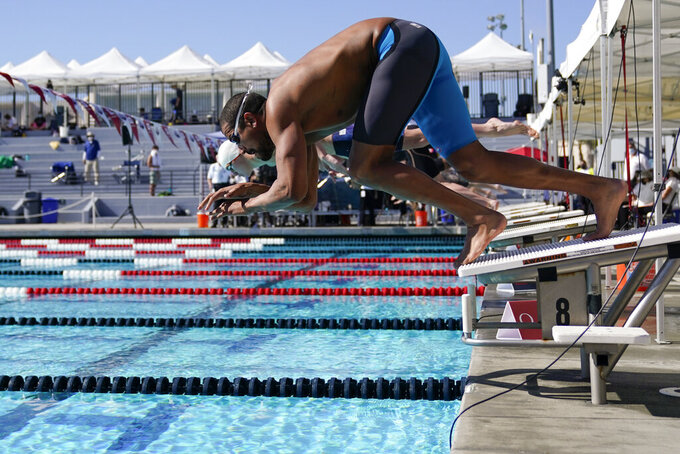 IRVINE, Calif. (AP) — Erica Sullivan and seven others dove into the pool at the sound of the starter's beep. They began churning through 16 laps of the 800-meter freestyle, signaling the return of major swimming competition in the U.S. for the first time since mid-March.

“I haven’t legitimately raced since January, so just having a taste of it again feels really good,” said Sullivan, a U.S. national team member competing in three freestyle distance events in the U.S. Open in Irvine.

The three-day meet runs through Saturday at nine sites across the country. Results from timed finals in each city are combined to determine winners of each event.

“This is the first step in the right direction,” said Jon Urbanchek, the 84-year-old former Michigan coach who still strolls the deck assisting other coaches.

Irvine is hosting about 240 swimmers — a mix of national team members, collegians and high schoolers — competing outdoors under strict safety guidelines at a time when COVID-19 is surging again in many parts of the country. Some of the other sites are indoors.

Ryan Lochte, seeking to make his fifth Olympic team at age 36, is competing at the U.S. Open site in Sarasota, Florida. He finished third in the 200 individual medley with a time of 2 minutes, 1.05 seconds on Friday.

“I still have the world record, but for me that’s history. That ship has sailed,” Lochte said by phone. “I’m just trying to make a name for myself again in the sport.”

The usual high-energy social scene on deck and in the stands has been reduced to a dull roar. Swimmers enter the complex through a designated spot and follow a progression from the warm-up pool, competition pool, warm-down pool and exit. The chlorine levels are being kept higher than recommended.

It’s all about social distancing, wearing masks, washing hands and having temperatures taken.

“Normally the U.S. Open is a giant hub for a bunch of top-tier athletes to be in one place, but this year is a little different,” Sullivan said. “I texted all my friends who are also swimming the 800 free in different locations and we’re like, ‘Have fun racing virtually.’ We’ve been making do.”

Swimmers are assigned lanes for their races based on entry times, instead of results from preliminaries determining lanes. There's no gathering in the typically tight confines of a ready room before races. Swimmers report directly to their lane.

Behind the blocks, swimmers stash their gear in garbage bins and take the plastic bag with them after a race rather than having volunteers tote their belongings. A new bag lines the bins for the next group.

“It’s humbling, that’s for sure,” Sullivan said, “but it definitely reminds me to take a moment and look back to where we used to be like when I was 8-years-old and swimming in a little local meet.”

There's minimal play-by-play during the races and of course, no fans. Some mask-wearing spectators gathered outside an iron fence on Friday to watch.

Sullivan has spent the months since the sports world was initially shut down in mid-March training in her hometown of Las Vegas. She swam in the 25-yard backyard pool of a family friend and in Lake Mead for a while. At least she had her coach with her.

“A lot of people weren't that lucky,” she said.

Staying motivated amidst all the uncertainty of the coronavirus and postponement of the Tokyo Olympics until 2021 has been challenging. Lindsay Mintenko, national team managing director, has held calls to galvanize the team.

Meanwhile, finding training locations is an ongoing challenge because of ever-changing COVID-19 closures and restrictions. Two-time Olympian Jordan Wilimovsky of Malibu plies the Los Angeles-area freeways, bouncing from Burbank to Santa Monica to Torrance in a given day.

“They have very limited hours and space that they're offering to teams to rent out,” said Wilimovsky, who swam in his uncle's backyard pool for six weeks. “Unfortunately for us, they closed down all the beaches in L.A. for a couple months.”

Wilimovsky has already qualified for open-water competition at the Tokyo Olympics; he's trying make the pool team in the 800 and 1,500-meter freestyle.

“Any time you get to go and train is a good day,” he said. “It makes you super-thankful for every day you get to be back swimming.”

With seven months to go until the Olympic trials, Urbanchek believes American swimmers won't miss a step in Tokyo despite the obstacles along the way.

“No question in my mind, we’re going to have a great team,” he said. ”We’re still going to be the world’s best."