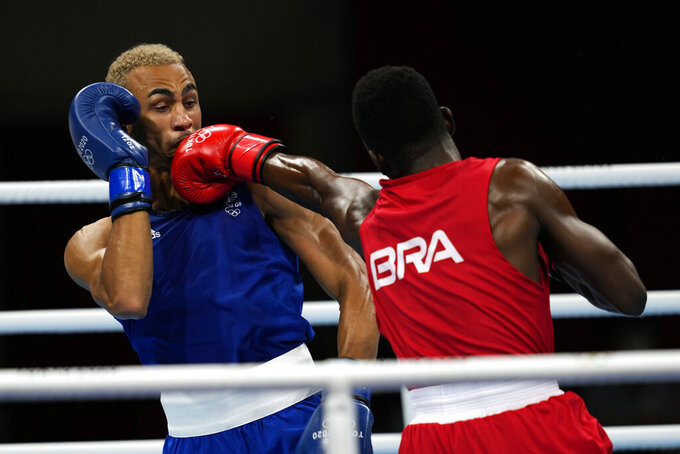 TOKYO (AP) — Benjamin Whittaker knows his style of boxing usually doesn't work at the highest levels of the amateur sport.

A defense-first fighter who doesn't like to trade punches and who loves to showboat is an extremely unlikely contender for an Olympic gold medal.

The British light heavyweight is still one victory away from dancing off with the Tokyo title when he meets Cuba's Arlen López on Wednesday. Whittaker is already one of six boxing medalists for the British team, which has claimed even more hardware than it won at its home London Games in 2012.

Whittaker's success is among the biggest surprises at the Kokugikan Arena, where he has frustrated and infuriated each of his opponents.

When he isn't testing their patience with his flamboyant struts and celebrations in the ring, he's counting on the judges to recognize punch-dodging, easy elusiveness and fairly soft counterpunching as a winning combination.

“Truthfully, they hate it,” Whittaker said with a laugh. “They don't like it in the amateurs. When you're a pro, you can do it.”

Throwing punches first — and throwing a lot of them — is by far the most effective way to maximize your chances for success in short bouts judged by ever-changing standards.

But Whittaker wants none of it. He won't brawl, and he doesn't trade shots if he can help it.

“I’ve got it in me, but why stand (and trade) if you don’t need to stand there?” Whittaker asked. “You don’t get any money for getting hit, do you? And my mum said, ’If you do box, I want you to come out with your looks intact.′ So I’ve got a little cut from a few years back, but that’s all I’ve got. My face still looks nice.”

With his bleached-blond hair and 6-foot-3 frame, Whittaker cuts a distinct figure between the ropes. In a division stacked with hulking physical specimens, Whittaker is a thin, lithe athlete.

When the bell rings, Whittaker fights with a mentality that runs nearly opposite to what most fans — let alone the judges — want from their pugilists. This West Midlands lad who freely admits he used to hate boxing knows he’s trying to walk a tightrope to gold while everybody else takes the sidewalk — and he doesn't apologize for it.

His semifinal victory over Imam Khataev was a masterclass in defense and showmanship that left the infuriated Russian clearly thinking he had won even though many of his punches hit nothing but air.

“There was times in there when I thought, ‘You know what, Ben? Take the risk. Push it,'” Whittaker said. “But I didn’t want to become a video on Instagram getting knocked out, so I thought, ‘Let’s keep the discipline, get the win.’”

When he left the ring, Whittaker broke into a few bars of “Gold,” the Spandau Ballet song that played incessantly at the boxing venue in London for the 2012 Games.

“I've got the silver, but I've got to change that color again,” he said.

The way Whittaker tells his story, boxing became his life path only because he couldn't think of anything better to do.

After getting tossed out of school in his native Darlaston, he worked as a sports shop clerk and as a steward at Wolverhampton Wanderers' home ground, Molineux Stadium, before getting fired from both jobs for eating meat pies and hiding in the bathrooms to avoid people.

His father, who also worked at Molineux, encouraged him to take boxing seriously after his last work disaster, even waking up his son and then riding alongside him on a bicycle as he jogged. Ben was soon the British amateur champion.

“I hated it,” Whittaker said. “Who wants to get punched in the face? But there was no other door for me. I didn’t have the fitness or the discipline, but I was very talented. I thought, ‘If I’m winning like this, maybe if I do get up and run, maybe if I do spar more than once a month, I could do something.’”

Whittaker has one last opponent to dazzle: López, the middleweight gold medalist in Rio.

Whittaker will claim Britain’s third light heavyweight medal in the past four Olympics, but he is hoping for its first gold since 1924 in the category previously won by Cassius Clay, Leon Spinks, Andre Ward and current Tokyo heavyweight Julio César La Cruz.

Whittaker is eager to join that club, yet boxing still doesn’t have his whole heart. He makes music under the name Benzo, and he wanted to walk out to his own songs in Tokyo.

“But my music is a bit explicit,” he said with a grin. “So maybe now I’ll have to make a few clean versions, because there would have been F words all over, and I don’t think the judges would like it.”