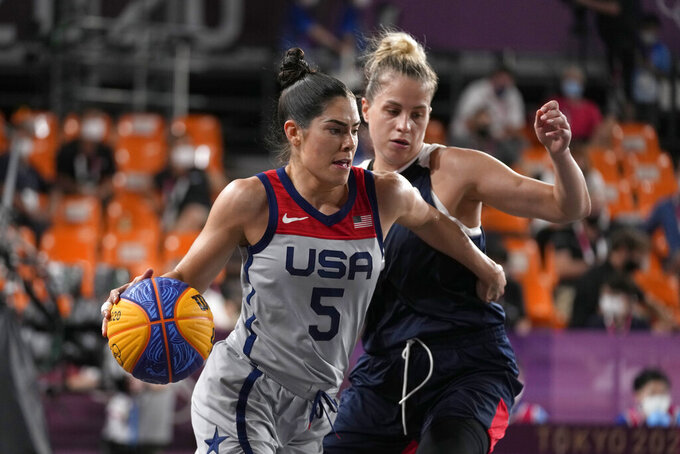 SAITAMA, Japan (AP) — Kevin Durant and Breanna Stewart have more than a little in common.

They’re two-time champions, Durant in the NBA and Stewart in the WNBA. Both are two-time finals MVPs. Both have a league MVP award. Both won rookie of the year when they broke into the pro game. Both have been MVP of a FIBA World Cup. Durant is widely considered the best men’s player in the world; Stewart widely considered the best women’s player in the world, and neither of those designations are difficult to argue.

They also each have a small scar on their right leg, a permanent reminder of what they had to go through to get back to the best-in-the-world level and be able chase gold medals at the Tokyo Olympics.

Durant and Stewart are the charter members of USA Basketball’s Achilles Comeback Club at the Tokyo Games, both serving as absolute go-to players for their respective teams at this Olympics and doing so not that long removed from the arduous process of coming back from the yearlong saga that follows an Achilles tear.

“We had a good relationship before the Achilles, but this was something we were able to bond over and check in on each other,” Stewart said. “We were rehabbing at the same time and going through the same struggles.”

Stewart's injury occurred about two months before Durant's and she cringed watching him tumble to the floor during the NBA Finals. The two started texting soon after.

And here they are, back at the top of their games and hoping to get to the top of the Olympic world in the next few days. Kelsey Plum, the other member of the comeback club, has already completed her task at the Olympics.

“When you used to think about Achilles injuries you used to think it was career ending,” said Stewart, who paid $30,000 out of pocket for her rehab because the injury occurred with her Russian team and the physical therapy wasn't covered. “Myself, KD, Kelsey are prime examples that it’s not that. You can rupture your Achilles and continue to be better. It's something motivating and helpful to those who may be going through the injury now.”

Stewart leads the unbeaten U.S. women, Durant is the captain of the U.S. men’s team that is seeking a fourth consecutive gold medal, and Plum was the top scorer on the U.S. women’s 3x3 team that won gold in that sport’s Olympic debut last week.

“I really was grateful I had someone that kind of paved the way for me,” Plum said of Stewart.

Stewart and Durant both injured their right Achilles while playing for championships — Durant was in the NBA Finals, Stewart was playing for a title overseas — and both are surprised by how small their scars are now. They also share in the belief that the injury was simply their bodies telling them to take a break.

Durant makes no secret that he’s an avid WNBA fan, and a Stewart fan to the point where even a two-time NBA Finals MVP and two-time Olympic gold medalist like himself calls her story “very inspiring.”

“Breanna being a champion after tearing hers and coming back and destroying the league the way she did it, and on her way to try to get another gold, it’s very inspiring,” Durant said. “There’s a lot of people out here that go through these injuries, especially this Achilles injury, there are so many people that don’t even play sports that have walked up to me and told me that they had Achilles’ injuries.

“And so, it feels like I have, in a weird way, a connection, not just to athletes but with people in general who go through these things,” he added.

Durant was as good as ever in his first season back after his injury: His averages of 26.9 points and 7.1 rebounds this past season with Brooklyn mirrored his career numbers, and his 3-point accuracy of 45% was by far the best of his career. Same goes for Stewart, who averaged 20 points and 8.8 rebounds in her first three WNBA seasons pre-Achilles, and 20.2 points and 9.0 rebounds in the two seasons since.

Stewart had Durant and Plum as guests on her podcast in August 2020 to discuss the process of coming back; Plum, at the time, was about 10 weeks removed from her surgery to repair her left Achilles, while Durant and Stewart were back on the floor at that point. They all shared tales about how the little things in life that get taken for granted — showering, brushing one’s teeth, getting dressed — were some of the toughest things, since it took months for their injured leg to cooperate again.

“To see those two, especially Kelsey, now finish the job and be a gold medalist, I’m just so proud to watch,” Durant said. “Just watching her as she’s come back, and she looks like she hasn’t missed a beat.”

This coming NBA season, Durant’s former Golden State teammate Klay Thompson is expected back from a two-year absence. Thompson tore his ACL in the 2019 NBA Finals, then ruptured his Achilles while trying to get ready for the 2020-21 season. If he can return in October — and even that is far from certain — Thompson will be back on an NBA court for the first time in 28 months.

Whenever Thompson returns, the Achilles Comeback Club will grow and Durant said he can’t wait to see it happen. And he is clearly enjoying being part of the comeback club in Tokyo along with Stewart and Plum.

“It feels like the people that go through this, we kind of have some connection,” Durant said. “So, it’s good to see those two bounce back, and I’m glad I’ve been able to be out on the floor as well.”