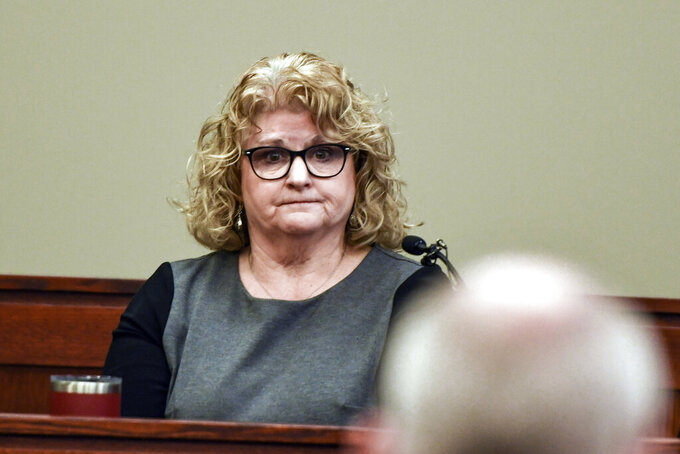 FILE- In a Feb. 14, 2020 file photo, former Michigan State gymnastics coach Kathie Klages testifies in Lansing, Mich., during her trial where she faced two counts of lying to police. A jury found Klages guilty of lying to police when she denied that two teen athletes told her of sexual abuse by sports doctor Larry Nassar in 1997, nearly 20 years before he was charged. Klages is due to be sentenced on Wednesday, July 15, 2020. (Matthew Dae Smith/Lansing State Journal via AP_File)

LANSING, Mich. (AP) — A water main break forced the postponement Wednesday of sentencing for a former Michigan State University head gymnastics coach for lying to police during an investigation into ex-Olympic and MSU doctor Larry Nassar.

Kathie Klages, 65, was found guilty by a jury in February of a felony and a misdemeanor for denying she knew of Nassar’s abuse prior to 2016 when survivors started to come forward publicly.

Water was cut off Wednesday to the courthouse where Klages was scheduled to be sentenced. Repairs were expected to take several hours. No new date was immediately scheduled.

Two women testified in November 2018 that in 1997 they told Klages that Nassar had sexually abused them. One of the women, Larissa Boyce, testified that Klages held up a piece of paper in front of the then-16-year-old and said if she filed a report there could be serious consequences for Boyce.

Nassar was sentenced in 2018 to 40 to 175 years in prison for decades of sexual abuse to hundreds of athletes.

Klages is the second person other than Nassar to be convicted of charges related to his serial molestation of young women and girls under the guise of medical treatment.

Nassar’s boss at Michigan State, ex-College of Osteopathic Medicine Dean William Strampel, was sentenced to jail for crimes including neglecting a duty to enforce protocols on Nassar after a patient complained about sexual contact in 2014.

This story has been updated to correct the spelling of the former coach’s first name to Kathie, from Kathy.