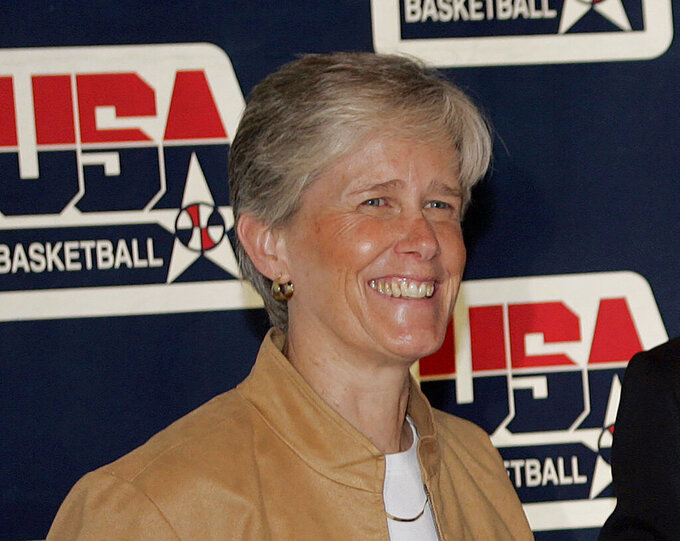 FILE - In this April 15, 2009, file photo, USA Basketball women's national team director Carol Callan attends a news conference in Storrs, Conn. Callan will step down after the Tokyo Olympics to focus on her role as the president of FIBA Americas. She has been with the national team since 1995 and has worked behind the scenes to help the U.S. win six consecutive Olympic gold medals. (AP Photo/Bob Child, File)

LAS VEGAS (AP) — Carol Callan has excelled in many roles during her decades-long career as women's national team director for USA Basketball.

From planning all the logistics of trips the teams are taking, to charting fouls on the bench during games to acting as a surrogate mom for players who are far from home for the first time. Callan has been a steady force behind the scenes for the U.S. women's program during its unprecedented run since 1996.

The team just wrapped up its training camp in Las Vegas, and with Callan calling the shots, the U.S. women have won six Olympic gold medals and five world championships.

“She’s been the heart and soul of the women’s national team,” USA Basketball CEO Jim Tooley said. “She’s a selfless person with no ego. She's been a great mentor and leader and example for women’s basketball.”

The 68-year-old Callan has announced she is stepping down next month, after the Olympics end, from the position she has held since 1995. She'll be focusing on her role as president of FIBA Americas. There's no immediate successor in place and that will be the top priority after the Tokyo Games end, Tooley said.

“She has a great passion for it. She makes it so that the players just have to play and the coaches just have to coach and that’s where the selflessness comes in,” the CEO for USA Basketball said. “She’s not looking for accolades. That’s why she’s been so successful.”

Callan will still engaged with women’s basketball on the international stage. She was elected by the International Basketball Federation’s Zone Board in 2019 to serve a four-year term, becoming the first female to hold the position as head of FIBA Americas.

“I loved every minute of it,” Callan said of working with USA Basketball, adding “with the FIBA Americas presidency, there’s an opportunity to continue to serve women’s basketball and basketball in general in our zone in the Americas and have influence throughout FIBA. I’ve been been doing multiple jobs and now can give a more fulltime effort to that.”

Coach Dawn Staley, who was playing for the U.S. when Callan was first beginning in her role, has seen how invaluable Callan has been to the program.

“She never looks flustered, never looks like she’s not organized, always in control,” Staley said. “She never flinches about anything and we’re able to do what we do comfortably as players and coaches because Carol ran a tight ship. Whoever follows her has a tough job. A really tough job.”

Callan will continue to be a consultant for USA Basketball’s newly formed foundation working on initiatives supporting women and youth and sport development.

She arrived at USA Basketball after spending 10 years as as an athletic director at a high school in Colorado. She graduated from William Woods College and then earned two master’s degrees from the University of Colorado. She will be enshrined into the Women’s Basketball Hall of Fame next month.

One major reason she'll be such a tough act to follow is that every detail matters to Callan, nothing is too big or too small to bring to her attention.

Sylvia Fowles, who is playing in her fourth Olympics, remembers getting off a plane overseas early in her USA Basketball career and asking Callan if she could borrow her cellphone since she didn't have one. She wanted to call her mom and let her know that they had safely arrived.

“She's always been that person to make sure she's there when you need her. Always answering your texts in the middle of the night,” Fowles said. "To have her around this long doing such great work means a lot. I definitely see her as a mother figure.”

“I'm 40 years old and I texted Carol that ‘the (electricity) plugs in Japan are the same right?’ I googled it but didn’t necessarily believe it so I asked Carol. So there are moments like that where she’s the one you’ll go to.”

Bird said that Callan is the fabric of USA Basketball.

“The standards that are set are set by Carol. She’s the one ... that helps maintain that and those standards never drop and everyone’s living up to them. She’s super important to everything that’s been accomplished here.”

And still is. Her efforts will play a major role in whether the U.S. women can leave Tokyo with another gold medal in basketball.