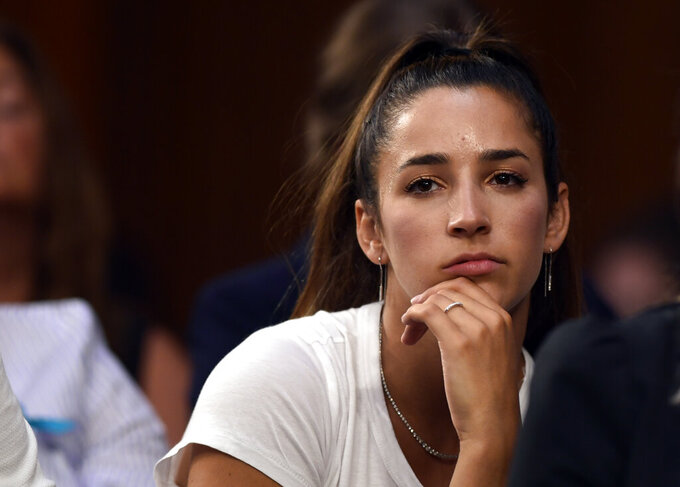 FILE - In this July 24, 2018 file photo, Olympic gold medalist Aly Raisman listens to testimony during a Senate Commerce subcommittee hearing in Washington. Raisman is looking for her beloved dog, who ran away scared during a weekend fireworks show in Boston. "My dog Mylo was terrified of fireworks and ran off," she tweeted Saturday, July 3, 2021, "He has a tag on and a leash. Please let me know if you see him." (AP Photo/Susan Walsh, File)

BOSTON (AP) — Olympic gymnast Aly Raisman was reunited with her beloved dog Mylo, a week after he ran off after being spooked by fireworks in Boston.

Raisman announced Mylo’s return in a tweet Friday night, six days after she reported the 35-pound brown dog was missing.

“HEROES!!!! MYLO IS SAFE. I HAVE HIM,” Raisman wrote on Twitter, adding a photo showing Raisman and Mylo flanked by his rescuers: two people Raisman named as Carla and Gayle, along with their dog.

Raisman said she would share more details of Mylo's misadventures later after spending some quality time with her canine companion.

A six-time Olympic medalist, Raisman is a Massachusetts native who served as captain for both the 2012 and 2016 U.S. women’s Olympic gymnastics teams. She is also a bestselling author and a survivor of sexual abuse.