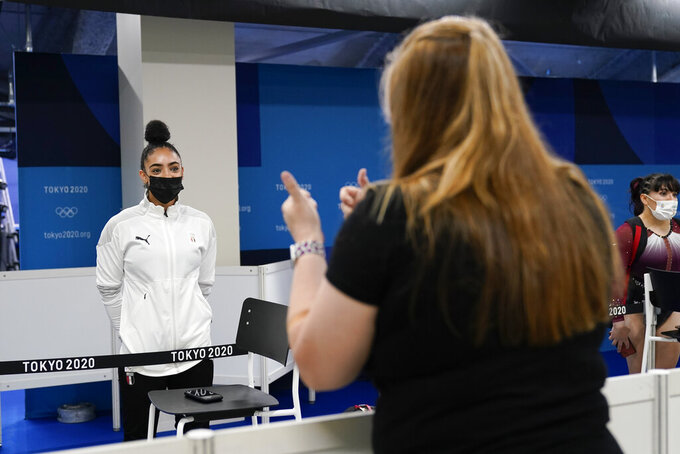 Jessica O'Beirne, right, interviews Mandy Mohamed, an artistic gymnast from Egypt, after the women's artistic gymnastic qualifications at the 2020 Summer Olympics, Monday, July 26, 2021, in Tokyo, Japan. Many in the world of gymnastics have a love-hate relationship with their noisy, often noxious, corner of the internet that they call the gymternet. O'Beirne started her podcast in 2012 because she didn’t like how mainstream media covered the sport. Women athletes were often infantilized and presented as objects without agency. (AP Photo/Ashley Landis)

TOKYO (AP) — Fresh off Tokyo's competition floor, four Olympic gymnasts lined up for a press conference. A podcaster offered a question on behalf of what has become a potent voice in the small world of elite gymnastics.

The athletes nodded in familiarity with the online collective of diehard gymnastics fans cranking into gear for the Olympics.

Many in this world have a love-hate relationship with their noisy, sometimes noxious, corner of the internet, where thousands of passionate fans celebrate the sport that most people pay attention to only in Olympic years.

But some within the community acknowledge that its hostile approach to outsiders and some athletes is self-defeating. They want people to love the sport as much as they do, but they mock those who don’t as “four-year-fans” and attack athletes they don’t like or uneducated newcomers who wander into their universe.

“I think the gymternet has a good heart. It’s a well-intentioned space,” said Jessica O’Beirne, a de facto spokeswoman for the collective through her podcast, GymCastic, which 25,000 people tune into each week.

“The irony, of course, is that it’s also super mean,” she said. “The gymternet is so willing to defend athletes from abuse, but not look at their own part as an abuser.”

She started her podcast in 2012 because she didn’t like how mainstream media covered the sport. Women athletes were often infantilized and presented as objects. The gymternet is, in that, her ally. Unlike other sports enthusiasts, she said, people there care about more than winning or losing; they push for a change in a culture that for years allowed abuse to flourish unchecked.

Perfection is expected here — the ability to recite an intricate history of the sport, its skills and its point system — and any mistake is grounds for a full-throated roasting, even of the athletes actually doing the work. A gymnast once posted online that she’d just done a tricky skill called a Tkatchev, and the gymternet tore her apart. Her offense: she misspelled the word “Tkatchev.”

Every fall, every flat foot, is critiqued mercilessly by mostly anonymous commentators, who often use cutesy gymnastics puns as twitter handles. Some athletes fall out of favor for voicing opinions outside of the gymternet’s liberal leanings.

Members sometimes wade into conspiracy. They analyze silent videos of athletes on the sidelines, reading meaning into every cock of an eyebrow or downturned lip, then they spread their assumption of the gymnast’s inner thoughts at fact. Others play doctor, diagnosing injury — even autism.

“It can be bullying,” said Lauren Hopkins, who runs a blog called The Gymternet that is so well regarded she received a media credential to cover the Olympics.

“I feel like they think they have more of a friendship with these athletes, having interacted with them online, than they actually do," she said. "So stuff that you might say to your friends, to make fun of them in a joking way, they’ll say that same stuff to the athletes.”

Both Hopkins and O’Beirne got their start as run-of-the-mill members of the gymternet. And like most, they grew up obsessed with the sport in pre-internet days, with little access to enjoy it directly and few others in their towns as interested as they were.

For some, their love of this sport is deep and personal. O’Beirne’s father was run over by a truck as a boy and lived in pain his whole life. He was introduced to gymnastics at military training, and it was the first exercise that took his discomfort away. He was in awe, and led his daughter to love it, too.

The gymternet was born among these devotees in the internet's early days, on message boards where people searched for ways to watch gymnastics. Other sports like football or basketball were on TV all the time. But before YouTube, gymnastics was hard to find outside of the Olympics.

Scott Bregman remembers scouring the TV listings as boy in Kansas every week, hoping to see gymnastics. He rarely did.

Online, he discovered a club where people would copy VHS tapes and mail them to each other in exchange for a tape of a competition they’d never seen. He would copy tapes for hours, send them out and wait at the mailbox.

On these message boards, they also found each other. Their struggle just to watch the sport in those days, he thinks, is what now sets the gymternet apart from fans of mainstream sports, where all you have to do to find others like you is show up at a sports bar.

Some call Bregman “the most beloved darling of the gymternet.” Many watched him grow into a champion collegiate gymnast. Now he works as a reporter for the Olympic Channel and struggles with the toxic parts of the internet fan base.

The most vicious members are so committed to savaging athletes online, they sometimes avoid using their names so the athletes won’t block them. To bash current Olympian Sunisa Lee, for example, they started representing her nickname, Suni, as a series of emojis: a sun and a knee. But the online algorithm delivered these tweets to Lee — an 18-year-old from Minnesota who won the Olympic all-around title on Thursday — anyway.

Bregman interviewed her in May, and she told him the constant criticism was wearing on her.

“(W)e work so hard, and then people are just so quick to judge or criticize us,” she told him. “I feel like it just gets to us mentally, especially in the gym lately, like I’ve just been so insecure.”

The gymternet, some say, often chases off prospective fans. If a newbie unwittingly enters the gymternet by tweeting an unsupported opinion, members will often pounce, Hopkins says.

“How can we ever get the sport to be bigger if we’re constantly closing the door on anyone who has any desire to come in?” she wonders.

Emily Marver, known by her Twitter name Spanny Lee Tampson, found her way to the gymternet's early iterations on the message boards in the 1990s. Her love for the sport started early. As far back as she can remember, she loved the sensation of being upside down. She'd hang from railings and terrify her mother.

She felt alone, then found all these people like her.

“I thought I was the biggest nerd out there. I wasn’t,” said Marver, now a 39-year-old stay-at-home mother. “I feel like I’ve grown up with these people.”

She was once part of what she calls the “cool mean kids.” The internet felt like a vacuum, like the targets of their ridicule were far away. Then she was tagged on a post mocking one of her heroes, 1996 Olympic gold medal-winner Dominique Moceanu. She got notified that Moceanu had blocked everyone in the discussion — including her.

“I was like, ‘My childhood hero just blocked me on Twitter because I’m part of this group,’” she said. “I was horrified to be associated with it, just pure shame.”

It caused Marver to reflect on prior posts. She found that she’d never been as funny as she thought.

The gymternet needs to do that now, she says. She considers herself its den mother, and she tries to remind people that they’re sitting at home while these athletes, often young women and girls, are performing hard, dangerous skills.

“There’s a fine line between wit and observational humor and just being mean,” Marver said. “And I think the gymternet really needs to locate where that line is.”

So far, the gymternet has defended American superstar Simone Biles since she withdrew from competition during the team finals. O’Beirne said its members are attacking anyone who criticizes Biles for stepping away amid mental health struggles.

But Marver said she has watched the gymternet turn on its own heroes before. Gabby Douglas, an Olympic champion in 2012 and 2016, was treated ruthlessly.

“I don’t want to say that they build you up just to knock you down,” Marver said. “But having seen them do that, it would be ignorant to say it couldn’t happen again.”