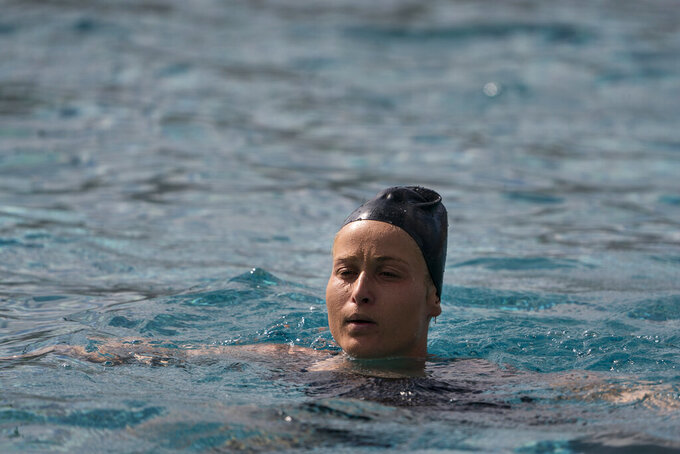 LOS ALAMITOS, Calif. (AP) — Stephania Haralabidis was 12 when she decided she was done with competitive swimming. She hated the stress and anxiety that it brought on for her.

Her mother, Janet, wanted to put Haralabidis and her sisters, twin Ioanna and Anastasia, in synchronized swimming. But their father, Babis, played water polo, and he successfully lobbied for the sisters to try it out.

“We got in. We started egg-beatering on the first day, like regular egg-beater (kick). No problem passing the ball,” Stephania Haralabidis said. “And we fell in love with the sport.”

All the way to the Olympics.

Stephania Haralabidis, 26, is among five newcomers on the U.S. squad heading to the Tokyo Games this summer. The 13-player roster was announced Wednesday in Los Angeles.

Captain Maggie Steffens and defender Melissa Seidemann are going for their third consecutive gold medal. Alys Williams is heading to the Olympics for the first time, becoming the first woman to make the American team after she was cut when the roster was finalized for the previous games.

The addition of Haralabidis gives the already powerful U.S. a rare commodity on the international water polo scene: a left-hander. Because her strong side with the ball is different, she creates time for her teammates.

“Just having her in the pool opens other people up,” Steffens said.

Haralabidis helped the U.S. win its seventh consecutive World League Super Final last week in her native Greece. She scored 13 times as the U.S. swept its six matches to improve to 14-0 this year.

“She’s a great distributor and she can shoot the ball,” coach Adam Krikorian said. “Not to mention she’s probably the fastest player in the world. Her speed is unlike anything I’ve seen in this game.”

Haralabidis was born in Athens and grew up playing in the Greek system. She played college ball with Ioanna at Southern California, scoring 269 goals and helping the Trojans to the 2016 NCAA title.

Haralabidis' mother is American, and her father is Greek. She said she has always identified as a Greek-American, and she made the switch to the U.S. program in 2017.

It wasn't exactly a smooth transition.

“When I first got here, I was really nervous and I didn't really have any friends on the team,” she said. "And every day I had to push myself to a point where my body was hurting, my mind was telling me you have to give up, like you can't do this.

Haralabidis also is into fashion, modeling and traveling, and she found a kindred spirit in U.S. goaltender Ashleigh Johnson. They often pop up on each other's Instagram feeds, clowning around or striking a pose for a dramatic picture.

They also have made each other better in the pool, with Haralabidis learning from shooting on likely the best goaltender in the world.

“I can't even explain what an incredible player she is,” Haralabidis said. “I have a lot of respect for her as a person and as an athlete. You can't really put in 50% when you’re shooting on her. You have to give 100% and you have to try and read her body and what she’s going to do and what she’s thinking next.”

Long before she started playing with Johnson and the star-studded U.S. team, Haralabidis competed with her sisters. She is sharing her national team experience with each of them, talking to Ioanna every day.

“No one will ever understand you better than your siblings,” Stephania Haralabidis said.