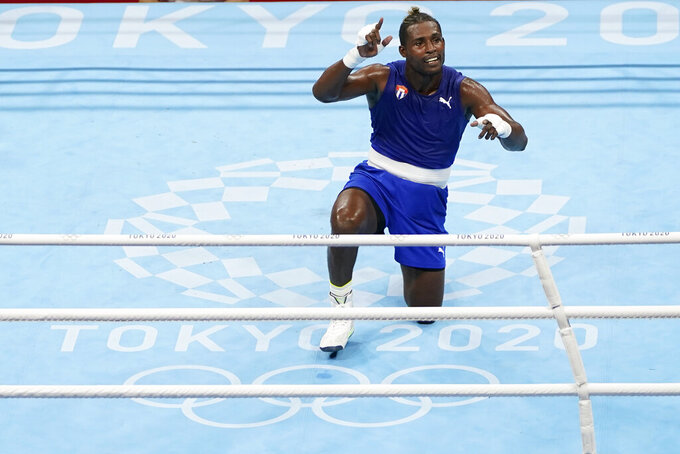 TOKYO (AP) — Only six fighters had won gold medals in two weight classes in Olympic boxing before a trio of polished Cuban veterans joined the club over the past four days in Tokyo.

Julio César La Cruz, Roniel Iglesias and Arlen López showed the Cuban domination of this Olympic discipline is far from finished, no matter how much the game changes around them.

La Cruz capped the trifecta on Friday with a clear victory over Russian heavyweight Muslim Gadzhimagomedov, putting on a defensive masterclass in his 5:0 win.

La Cruz added the Tokyo heavyweight title to his light heavyweight gold from Rio de Janeiro. His two-time teammates also moved up one weight class from their previous championship divisions to claim their second golds.

An extraordinary feat has been made common by these three Cuban stars, and they're aware of the importance of their achievements in their nation's decorated boxing history.

“We have great talent in our ranks, so we’re confident,” La Cruz said through a translator. “We just have to prepare, train hard and focus on the objective.”

Amateur boxing has changed significantly from the sport that the Cuban teams dominated through long stretches of the past half-century. The Tokyo field contained more than 40 boxers with professional experience, and the overall skill level seems remarkably high throughout most of the weight classes.

But Cuba's indefatigable program can add a fourth gold from Tokyo when lightweight Andy Cruz meets Keyshawn Davis of the impressive U.S. team Sunday in the final competition session.

Only two Cubans had won medals at three Olympics before Iglesias and three-time bronze medalist Lázaro Álvarez doubled the size of that club over the past week.

López, the middleweight champ in Rio, then succeeded La Cruz as the light heavyweight champion in Tokyo, while Iglesias claimed gold in his second try at welterweight after winning at light welterweight nine years ago in London.

“Right now we have a group of athletes that have been working together for 11 years,” La Cruz said. “Starting in London 2012, our team has only lost one final. In Rio we won three (gold) medals, and now we’ve already won three (in Tokyo), and we hope to go further. We will see, and hopefully we will clinch that final victory and provide a triumphant moment to the people of Cuba.”

While some Cubans — including Robeisy Ramírez, a fellow two-division gold medalist from London and Rio — have left the national team for pro riches, the Cuban system is still nurturing top talents.

And the Cubans’ best fighters in Tokyo seemingly aren’t interested in careers outside the team: La Cruz drew attention from the IOC when he appeared to make a pro-regime statement in the ring after an early victory in Tokyo, and both Iglesias and López have spoken of their pride in fighting for their country over themselves all the way to Paris in 2024.

“To win Olympic gold is really very, very tough, and it requires everything really from the boxer,” La Cruz said. “The fighter has to give it his best. All of the boxers are at a very, very top level here, and to reach that gold medal requires hard work and sacrifice.”

Gadzhimagomedov pressed forward throughout the bout, but La Cruz showed off his spectacular footwork and elusiveness while peppering his bigger Russian opponent with counter shots. La Cruz won the fight 30-27 on three judges’ scorecards and 29-28 on the other two, completing a four-fight run through the Kokugikan Arena during which he won 5:0 twice and 4:1 twice.

La Cruz collapsed after the verdict, spread-eagled at the center of the Tokyo ring and soaking in the achievement by a superb athlete whose career could have ended in 2014 when he was shot in the hip during a robbery attempt.

“Going to Paris and winning (a third gold medal) is one goal that can be achieved,” La Cruz said. "It has no size. No color. No price.”