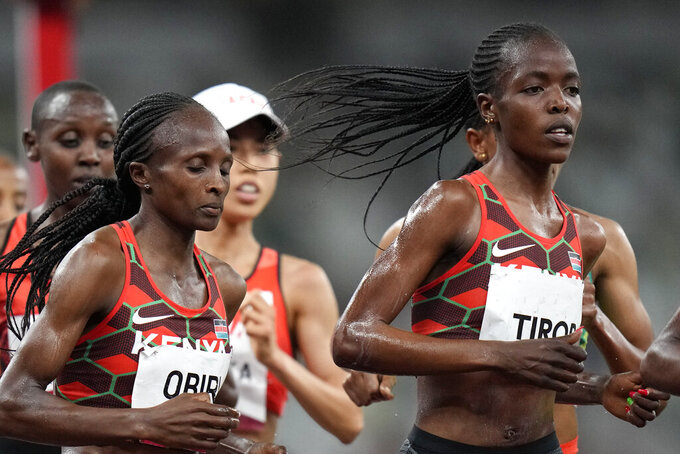 NAIROBI, Kenya (AP) — The husband of Olympic runner Agnes Tirop has been arrested and will be charged with her murder after Kenyan police launched a nationwide manhunt and found him in the coastal city of Mombasa trying to flee the country, authorities said.

Ibrahim Rotich was arrested just before 9 p.m. Thursday, police said, but only after crashing his vehicle into a truck in a car chase with police and escaping a first attempt by officers to apprehend him about 460 kilometers (285 miles) from Mombasa. He was finally arrested hours later in the eastern city.

Rotich was detained a day after Tirop, a two-time world championship bronze medalist, was found stabbed to death at her home in the western town of Iten, more than 800 kilometers (500 miles) from Mombasa on the other side of the country. The 25-year-old Tirop's body was found in a pool of blood with stab wounds in the abdomen, police said.

Rotich was immediately identified as the prime suspect and police said he went on the run after making a tearful phone call to his family confessing he had done something terrible.

Rotich was arrested alongside another man he was traveling with and had Tirop's cell phone with him, police said.

The Directorate for Criminal Investigations said Rotich was being questioned at a police station and would be charged with murder.

Rotich and Tirop were married in a traditional Kenyan ceremony but were estranged at the time of her killing. Their families had convinced them to try to reconcile and they had apparently met this week to do that.

Tirop was a rising star in Kenya after winning the 2015 world cross-country title at the age of 19, the second youngest athlete ever to win that event. She also claimed bronze medals in the 10,000 meters at the 2017 and 2019 world championships and finished fourth in the 5,000 meters at the Tokyo Olympics.

Last month, she broke the world record for the women-only 10-kilometer road race.

Kenyan President Uhuru Kenyatta was one of many who expressed outrage at her killing. Kenyatta, who is on an official visit to the United States, said Tirop was a “Kenyan hero” and ordered police to find her killer.

The Kenyan track federation suspended all its events in the country for two weeks in a mark of respect for Tirop.