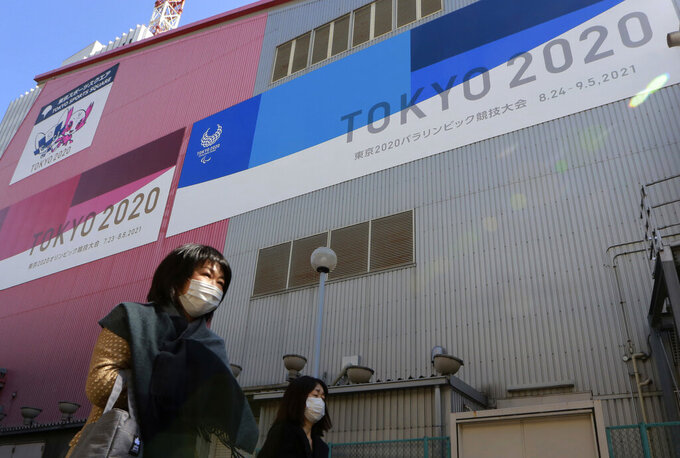 FILE - In this Feb. 24, 2021, file photo, people walk past posters to promote the Olympic Games scheduled to start in the summer in Tokyo. Frustration is mounting over Japanese Prime Minister Yoshihide Suga’s request that people cooperate while he pushes to hold the Olympics in just over two months. (AP Photo/Koji Sasahara, File)

GENEVA (AP) — The IOC on Wednesday downplayed concerns over Japanese public opinion calling for the Tokyo Olympics to be canceled, before its virtual news conference was interrupted by an activist protesting the games.

The news conference followed a monthly meeting of the International Olympic Committee's executive board held amid a state of emergency in Tokyo to curb surging COVID-19 cases. Polling in Japan also persistently suggests people want the July 23-Aug. 8 Olympics to be called off, having already been postponed by one year.

“We listen but won’t be guided by public opinion,” IOC spokesman Mark Adams said, adding “everything is telling us ... that the games can go ahead and will go ahead.”

Adams stood in for his boss, IOC president Thomas Bach, whose planned visit to Japan next week was called off Monday after states of emergency in Tokyo and other regions were extended through May.

The final question of the news conference, held by video call, was offered to a reporter from Yahoo Sports. Instead, an activist appeared on the screen holding up a black and white banner opposing the Tokyo Olympics.

Adams made light of the interruption noting if Bach had been present it “probably would have made that stunt a little bit more interesting.”

The NOlympics LA group later claimed on its Twitter account it had “crashed the IOC’s press conference.”

A tricky week for the IOC comes just 78 days before the Tokyo Olympics are scheduled to open, which Adams said would be a “historic moment” for the world and make the Japanese people proud.

Olympic Games typically dip in popularity in the host nation before momentum picks up when the games open and the sports begin.

“I am very confident that we will see public opinion hugely in favor of the games,” Adams said, adding that Japanese people strongly approved of Tokyo’s candidacy. It won a bidding contest in 2013 against Madrid and Istanbul.

Still, opposition has seemed to harden against an Olympics that has cost at least $15 billion of mostly taxpayers' money.

Adams said there was private polling numbers known to the IOC and organizers in Tokyo though no details were given Wednesday.

Amid the uncertainty and disrupted plans for the ongoing four-month torch rela y across Japan, test events have continued to be held in Tokyo. Olympic qualifying events have also been held worldwide.

Around 7,800 athletes have qualified for the games — 70% of the total quota — with a further 10% set to be earned by June 29, Adams said. About 20% of entries are being awarded according to world rankings in some of the 33 sports.

A “large and growing number” of participants will be vaccinated against COVID-19 before arriving at the athlete village in Tokyo, Adams said.

The IOC has struck deals to buy Chinese vaccines and receive donations of doses from Pfizer to distribute to Olympic team delegations worldwide.