Japan's PM vows Olympics will be proof of victory over virus 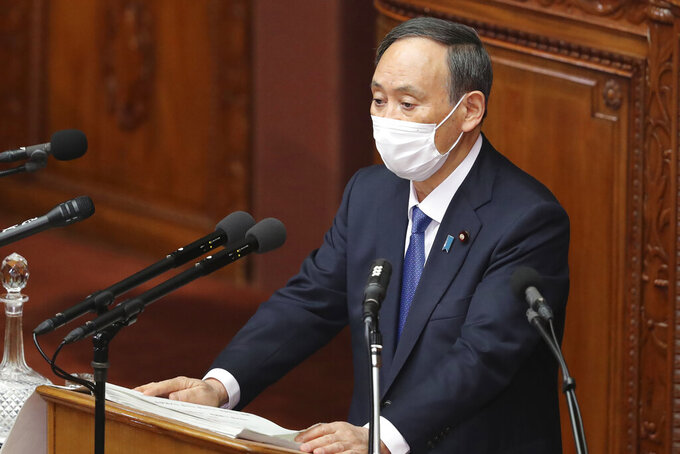 In a speech opening a new Parliament session, Suga said his government would revise laws to make anti-virus measures enforceable with penalties and compensation.

Early in the pandemic, Japan was able to keep its virus caseload manageable with non-binding requests for businesses to close or operate with social distancing and for people to stay home. But recent weeks have seen several highs in new cases per day, in part blamed on eased attitudes toward the anti-virus measures, and doubts are growing as more contagious variants spread while people wait for vaccines and the Olympics draw closer.

Suga said his government aims to start vaccinations as early as late February.

“In order to restore sense of safety, I will get the coronavirus pandemic, which has raged worldwide and is now severely affecting Japan, under control as soon as possible,” Suga said. “I will stand at the frontline of the battle while I get the people's cooperation."

Suga pledged to achieve the Olympics as “a proof of human victory against the coronavirus."

“We will have full anti-infection measures in place and proceed with preparation with a determination to achieve the Games that can deliver hope and courage throughout the world," he said.

Recent media polls show about 80% of the Japanese public think the Olympics will not or should not happen.

Suga said the vaccine is the “clincher” of the pandemic and hopes to start vaccination when Japan's Health Ministry is expected to approve the vaccine developed by Pfizer, one of three foreign suppliers to Japan, as early as late February. But the pace of inoculation could be slow, as surveys have shown many people have safety concerns.

Suga also said in his speech, just two days ahead of U.S. President-elect Joe Biden’s inauguration, that he hoped to meet the new American leader soon to further strengthen the Japan-U.S. alliance and to cooperate on the pandemic, climate change and other key issues.

Japan has confirmed more than 330,000 infections and 4,500 deaths from COVID-19, numbers that have surged recently though they are still far smaller than many other countries of its size.

Suga on Jan. 7 issued a state of emergency for the Tokyo area and expanded the step last Wednesday as the surge in infections strained medical systems. But he has been criticized for being slow to put preventative measures in place after the new surge began, apparently due to his government’s reluctance to further hurt the economy.

He kept the state-subsidized “Go To” travel promotion campaign active until late December, which critics say misguided the public when people needed to practice more restraint. Suga in Monday’s speech made no mention of the “Go To” campaign, which was designed to support the tourism industry devastated by the pandemic.

The state of emergency — covering more than half of Japan’s 127 million people — asks bars and restaurants to close by 8 p.m., employees to have 70% of their staff work from home and residents to avoid leaving home for nonessential purposes. It's set to end Feb. 7 but could be extended.

One of the proposed changes to anti-virus measures would legalize compensation for business owners who cooperate with such measures and allow fines or imprisonment for those who defy them.

Health officials believe a growing number of people are defying instructions from health officials to self-isolate or be hospitalized, spreading the virus and making contact tracing difficult.

Opposition lawmakers and experts are cautious about punishment for the patients, citing human rights concerns. They also say such punishment is pointless when hospitals are running out of beds and forcing hundreds of people to wait at home.