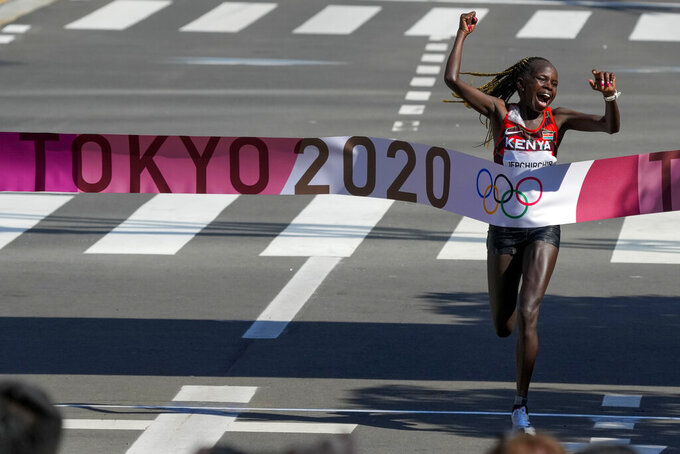 Peres Jepchirchir, of Kenya, celebrates as she crosses the finish line to win the women's marathon at the 2020 Summer Olympics, Saturday, Aug. 7, 2021, in Sapporo, Japan (AP Photo/Shuji Kajiyama)

SAPPORO, Japan (AP) — There was an unfamiliar sight along the women's marathon course at the Tokyo Olympics: actual fans. Cheering, too.

At the end, a more familiar view — a Kenyan racer leading the way.

Peres Jepchirchir led a 1-2 Kenyan finish in the women’s marathon, withstanding the heat and humidity while running through the streets of Sapporo, more than 500 miles (more than 800 kilometers) north of Tokyo.

Jepchirchir's winning time of 2 hours, 27 minutes, 20 seconds on Saturday was not fast — 10 minutes off her personal best — but it was still sizzling considering the conditions.

The start was moved up an hour to avoid the heat and a smattering of spectators lining the course applauded as the Tokyo Games went north for the marathons and race walks. Jepchirchir's teammate Brigid Kosgei was second and American Molly Seidel, a relative newcomer to the marathon stage, took home the bronze.

“I’m going to say too hot,” said Jepchirchir, who gave Kenya back-to-back Olympic gold medals. “Despite the challenge of the weather, it was good.”

The prevailing thought: Thank goodness for the time change. Seidel was at dinner when she heard the news.

“My jaw just dropped,” she said. “I immediately got up and went to bed.”

A race that was moved to Sapporo to avoid the extreme heat and humidity in Tokyo found little relief on a winding course through the city. The starter’s gun went off near 6 a.m. under a sunny sky and with a temperature reading of 77 degrees Fahrenheit (25 Celsius). It climbed to nearly 86 degrees (30) near the finish, with a humidity of around 65%.

“The weather was really hot and tough for a competition,” said Kosgei, the world record-holder in the event at 2:14.04. “We tried our best to finish.”

There were 88 runners entered in the field and 15 recorded a “did not finish.” That included world champion Ruth Chepngetich of Kenya.

The weather appeared to take its toll on Lonah Salpeter of Israel late in the race. Among the final four with around 4 kilometers to go, she suddenly stopped and walked to the side of the road. She still finished — 21 minutes behind.

Seidel pretty much forecasted this day when she was a kid. In fourth grade, she wrote a note to herself on her goals: Make the Olympics.

Bronze felt so satisfying. It was a surprise, too, given it was just her third marathon.

She screamed when she crossed the finish line and said “Hi” to her mom and dad into the camera.

“I came in today with not a whole lot of expectations,” said Seidel, who is from Wisconsin. "I was hoping to be in the top 10.

“Just trying to like stick my nose where it didn’t belong and just kind of get after it. I mean, Olympics only happens once every four years, you might as well take your shot.”

Volunteers wearing yellow shirts stood along the course with signs that loosely translated into: “Refrain from watching here.” But spectators lined the course anyway, sneaking a rare glimpse of the action at these Olympics where fans have been shut out due to coronavirus restrictions.

Their applause was heard.

The runners tried to stay cool any way possible. Aleksandra Lisowska of Poland grabbed an entire bag filled with water at one stop, quickly drinking one and then pouring another over her head. Andrea Deeltstra of the Netherlands had a bag of ice perched on top of her head.

Aliphine Tuliamuk of the United States was returning to racing after giving birth to her daughter in January. She didn't finish due to a nagging hip ailment.

This was her gold-medal moment: picking up her daughter out of her stroller after the race.

Some of these competitors got a taste of the furnace-type heat and humidity at the 2019 world championships in Doha. That race was run at midnight and the temperature still hit 88 degrees (31 C). It led to nearly 30 runners not reaching the finish line as Chepngetich captured gold.

Chepngetich was in the mix Saturday until late in the race when she began walking.

Working as a team, Jepchirchir and Kosgei were shoulder-to-shoulder late in the race until Jepchirchir made her move. Kenya's two medals gave it a total of seven in the women’s Olympic marathon, the most of any country.

“I pushed on the pace (and when I opened the gap) it was like: ‘Wow, I’m going to make it. I’m going to win,'" Jepchirchir said.