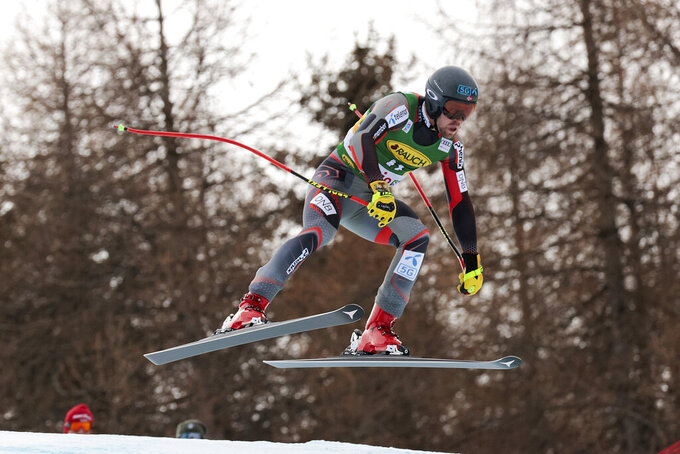 BORMIO, Italy (AP) — Aleksander Aamodt Kilde mastered a tricky course to win a World Cup super-G by a large margin Wednesday for his third straight victory in the discipline.

Including a downhill win, Kilde has four victories overall this season. Not bad for a skier who tore the ACL in his right knee in a training crash last January and missed the second half of last season.

“It’s running pretty smooth,” Kilde said of his performance. “I managed to find a good kind of intensity and also I understand that what I do is good enough and not try to overdo it. And that’s a very good feeling and I just need to keep that going and enjoy being back skiing and racing. That’s my life and I love it.”

Kilde’s other super-G victories this season came in the second of two races in Beaver Creek, Colorado, and in Val Gardena.

Kilde has never won a medal at a world championships or Olympics but his recent results set him up as the favorite for gold in super-G at the Beijing Olympics, which open Feb. 4.

It was the 10th World Cup victory of Kilde’s career — six in super-G and four in downhill.

Throwing himself down the icy and dark Stelvio course on a straighter line than anyone else, Kilde soared 45 meters (yards) off the San Pietro jump midway down.

It marked the first podium result for the 24-year-old Haaser, who won three medals at the 2017 and 2018 junior world championships. Haaser's previous best finish was fourth in a super-G on home snow in Saalbach at the end of last season.

Kriechmayr swept the super-G and downhill titles at last season’s world championships in Cortina d’Ampezzo but is still seeking his first victory of this season.

Still, Odermatt finished eighth and maintained a comfortable lead of 276 points over Kilde in the overall standings.

For Cochran-Siegle, it marked another step in his return from a horrific crash on the Streif course in Kitzbühel, Austria, in January, which left him with a fracture of the seventh cervical vertebra of his spine.

Cochran-Siegle was in position to finish on the podium until Haaser came down with the No. 25 bib — outside the top-ranked starters — and bumped him down a spot.

“It’s good to be a goldfish and forget the past and really just focus on what’s before you,” Cochran-Siegle said. “I know I’ve done well here on this hill, so I know how to ski it well, you just have to go out and execute.”

Dominik Paris, the Italian who won Tuesday’s downhill for his seventh victory in Bormio, finished 24th.

While no fans are allowed in the Bormio finish area because of anti-coronavirus measures, recreational skiers still watched from beyond the safety nets alongside the course.

Another super-G scheduled for the Stelvio on Thursday will mark the final race of the calendar year.