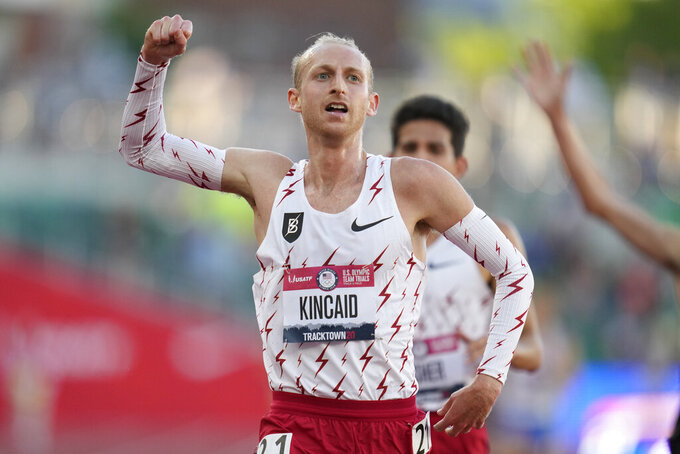 Woody Kincaid sprinted the final stretch to hold off teammate Grant Fisher and win the 10,000 meters at U.S. Olympic trials to earn a spot to the Tokyo Games.

Kincaid finished in 27 minutes, 53.62 seconds as he out-kicked Fisher. They both run for the Bowerman Track Club. Joe Klecker finished third.

The 28-year-old Kincaid is from Littleton, Colorado, and went to the University of Portland.

Ryan Crouser broke a 31-year-old world record in the shot put at U.S. Olympic trials with a heave of 76 feet, 8 1/4 inches (23.37 meters) that also qualified him for the Tokyo Games.

The 28-year-old Crouser will defend his Olympic title next month. He broke the record set by American Randy Barnes, whose mark of 75 feet, 10 1/4 inches, set on May 20, 1990, was one of the oldest in the record books.

When Crouser's fourth try plunked into the dirt, well beyond where any other mark had been ade, the quarter-filled stadium sent out a collective gasp. About a half-minute passed while officials checked the distance. When it came up on the board, he was mobbed by his competitors over near the circle.

Shelby Houlihan's name has been taken off the updated start lists for the U.S. Olympic trials, meaning the American record holder does not have a place in the 1,500 or 5,000 meter preliminaries Friday.

Houlihan was handed a four-year ban for testing positive for trace amounts of the performance enhancer nandrolone. She says the substance entered her system after she ate a pork burrito. There are several examples of tainted meats causing positive tests.

USA Track and Field initially said Houlihan would be allowed to run until all her appeals were exhausted. Later, it said it would not allow any banned athlete to compete.

Houlihan could have appealed the decision by the Court of Arbitration for Sport, which is based in Switzerland, to that country's highest court.

As of noon in Eugene, however, no word of such a filing had been given, meaning her suspension remains in place.

U.S. Track and Field Olympic trials have kicked off at the newly renovated Hayward Field in Eugene, Oregon.

Six spots for the Tokyo Games are up for grabs Friday — three in men's shot put and three in the men's 10,000 meters.

Also running Friday is Allyson Felix, who begins her quest for a fifth Olympics in the preliminary heats of the women's 400.