Matsuyama has green jacket and seeks gold in home Olympics 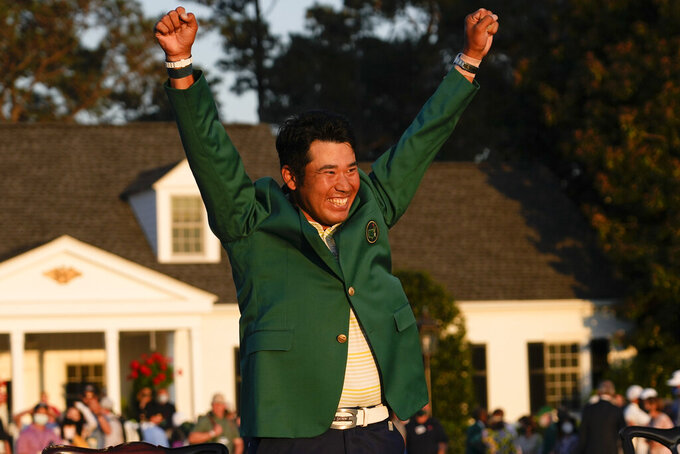 FILE - In this April 11, 2021, file photo, Hideki Matsuyama, of Japan, celebrates during champion's green jacket ceremony after winning the Masters golf tournament in Augusta, Ga. Matsuyama is among the favorites to win a gold medal in golf at the Olympics, all because of his green jacket. Matsuyama became the first Japanese player to win the Masters, a source of pride for a country with the greatest golf heritage of all Asian nations. (AP Photo/David J. Phillip, File)

Unlike golf's return to the Olympics in 2016 after a century-long absence, the sport won't be a mystery to the host nation this time around. No one had to build a new golf course in Japan that was suitable for the elite players.

Heroes won't be hard to identify.

All the stars — most of them, anyway — will be at Kasumigaseki Country Club for the Tokyo Olympics, and one in particular stands out.

Hideki Matsuyama is among the favorites to win a gold medal, all because of his green jacket.

Matsuyama became the first Japanese player to win the Masters, a source of pride for a country with the greatest golf heritage of all Asian nations. The timing could not have been better considering the COVID-19 pandemic that threatened to cancel the Olympics and now has led to severe restrictions and minimal local spectators a year later.

He already has deflected some of the pressure as Masters champion, saying the four major champions remain the biggest prize in golf.

“Not that we don't try to win the Olympics, but those are the events that are very important,” Matsuyama said. “However, with that said, there are other sports that the Olympics are the ultimate, the pinnacle of their sports. And so I hope that the Olympics will be able to be held in a great fashion that will make my fellow Japanese citizens proud.”

Matsuyama was among 22 men who skipped out of the last Olympics in Rio de Janeiro when golf returned to the program for the first time since 1904. Most of them cited fears over the Zika virus, along with security concerns.

Rio was an audition for golf to stay in the Olympics, and even with the top four men in the world staying away, the sport exceeded expectations with the final round sold out.

Now, perhaps more players are catching that Olympic spirit. Dustin Johnson at No. 2 in the world was the only player from the top 10 who chose not to go to Japan. Fourteen other qualifiers decided to pass, though Tokyo has all the big names.

“It's the only tournament I'm able to brag about being able to play,” Justin Thomas said. “I never got so many congratulations about being an Olympian. The first time you get in the PGA Championship, the British Open, you don't get people congratulating you. You get that when you're an Olympian.”

It was never an issue for the women, who rarely get a stage this visible.

All three medalists from Rio, starting with seven-time major champion and gold medalist Inbee Park, are back. The U.S. team features 22-year-old Nelly Korda, the No. 1 player in women's golf, and older sister Jessica.

Kasumigaseki Country Club is regarded as the most famous course in Japan. It opened in 1929 and features 36 holes for members. It hosted the precursor to the World Cup in 1957, which Japan won over the U.S. team of Jimmy Demaret and Sam Snead. It also has hosted the Japan Open four times, most recently in 2006, and the 2010 Asia-Pacific Amateur won by 18-year-old Hideki Matsuyama.

South Korea is the powerhouse again with the maximum four players, all of them among the top six in the world ranking. The Americans figure to get the attention because of the sisters Nelly and Jessica Korda. They are the daughters of 1998 Australian Open tennis champion Petr Korda. Nelly is 22 and is coming off her first major at the Women's PGA Championship, which allowed her to reach No. 1 in the world. Jessica is 28 and a six-time winner on the LPGA Tour.

The Japanese heritage goes beyond those playing for the flag of the rising sun. U.S. Women's Open champion Yuka Saso of the Philippines has a Japanese father and she lives in Japan with her four siblings. She will decide after the Olympics whether to play for Japan in future Olympics. Former PGA champion Collin Morikawa is California-born with Japanese ancestors. And then there's Xander Schauffele, who has family in Japan. His mother was born in Taiwan and raised in Japan.

THE VALUE OF A MEDAL

Hideki Matsuyama will feel the attention as a Masters champion playing at home in the Olympics. The real pressure belongs to Sungjae Im and Siwoo Kim of South Korea. The only way for them to avoid mandatory military service is to win an Olympic medal. Im, who starred for the International team in the last Presidents Cup, is 23 and likely will get another shot at the Olympics in 2024 in Paris.

WE INTERRUPT THESE TOUR SCHEDULES