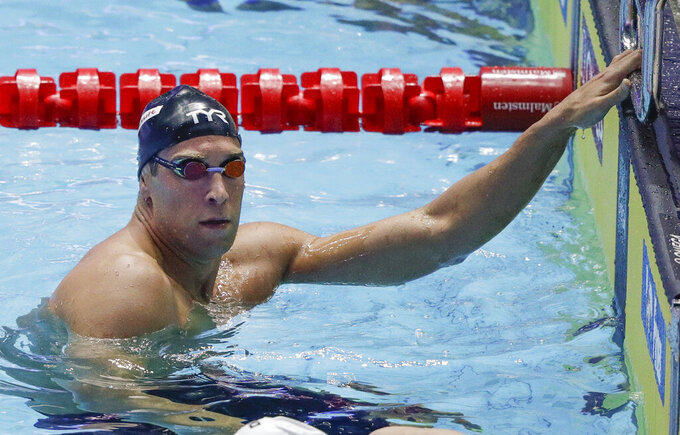 OMAHA, Neb. (AP) — Matt Grevers climbed out of the pool, yanked off his cap and began walking off the deck. He wasn’t done, though.

He stopped just before going downstairs, waving and smiling in the direction of the standing ovation from a corner of the arena. At age 36, it was likely the last one of his decorated swimming career.

“I almost started crying,” he said.

Grevers finished sixth in the 100-meter backstroke final at the U.S. Olympic trials on Tuesday night, dashing his bid for a third games. Defending Olympic champion Ryan Murphy won in 52.33 seconds. Hunter Armstrong, a 20-year-old out of Ohio State, earned the second spot for Tokyo.

“A changing of the guard,” Grevers said. “The young guys swimming 52s at this meet is pretty awesome.”

“I knew if I wanted to make the team I had to go pretty hard,” he said.

Murphy recalled finishing sixth at the 2012 trials as a 16-year-old when Grevers won.

“He came down those stairs and patted me on the shoulder and told me, ‘You’re next, man,’” he said. “He’s always someone who’s given me a lot of confidence.”

Grevers went on to earn his only individual Olympic gold in London. In 2008, he took silver in the 100 back and he owns three gold medals from swimming relays.

At the 2016 trials, Grevers was the defending Olympic champion and finished about a half-second short of earning a trip to Rio. Only the top two finishers earn spots; Grevers took third.

After that, he didn't swim the 200 back final and scratched the 50 free. Instead, he and his wife, Annie, visited the zoo before flying out of Omaha.

But Grevers decided to stick around for one more shot. He finished fifth in the 100 back at worlds in 2019. The coronavirus pandemic pushed his Olympic bid back a year, leaving him to sandwich training around parenting the couple's 4-year-old daughter.

“I just had a blast,” he said. “Being able to focus on myself like this, it’s unique for parents to have that opportunity.”

He plans to expand his residential real estate career in Tucson, Arizona, and turn his focus back to his family. He'll keep the sound of that final ovation in his heart forever.

“It shows that people appreciate not just me as a swimmer but me as a person, and that means more than any performance that I’ve had,” Grevers said. “This sport has been so good to me. It’s been a warm embrace all the way through.”