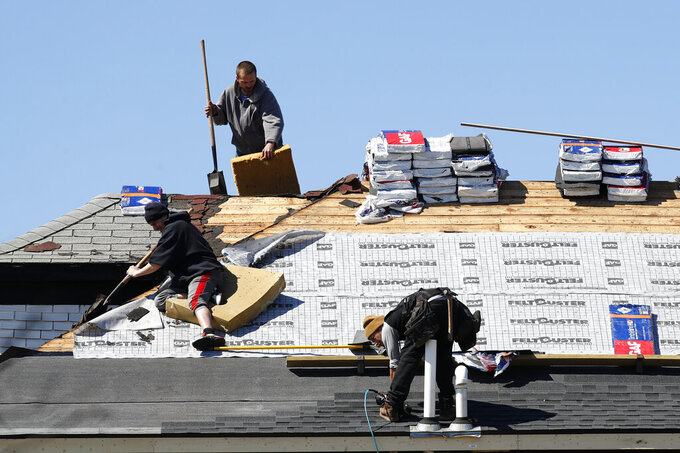 Roofers work on removing and placing new shingles in Warren, Mich., Thursday, April 2, 2020. The coronavirus COVID-19 outbreak has triggered a stunning collapse in the U.S. workforce with 10 million people losing their jobs in the past two weeks and economists warn unemployment could reach levels not seen since the Depression, as the economic damage from the crisis piles up around the world. (AP Photo/Paul Sancya)

LANSING, Mich. (AP) — Gov. Gretchen Whitmer said Michigan is probably a month away from reaching the peak of the coronavirus outbreak, which topped more than 10,000 cases and 417 deaths in the state Thursday.

“No one is immune from this virus,” Whitmer said during a news conference at the Capitol. “Each of us responds differently to this disease, and that's why we all must act as though we could be carrying it and stay home. Just one person with this virus can infect another 40."

Michigan has been hit particularly hard by the disease, reporting about as many confirmed cases of COVID-19 as California, which has about four times as many people. The vast majority of Michigan cases are coming from in and around Detroit.

In Detroit alone, residents make up 24% of the deaths statewide and 26% of the 10,791 confirmed cases of COVID-19, the illness caused by the coronavirus. City Council President Brenda Jones, who is also running for Congress, said she tested positive.

Drive-up testing is occurring at the old state fairgrounds in Detroit. Mayor Mike Duggan said 43% of the 500 people who passed through last Friday, the first day, tested positive.

The state's chief medical executive, Dr. Joneigh Khaldun, said the steady rise in overall cases means there likely will be a need for additional field hospitals beyond one being set up at the TCF Center in Detroit.

Dr. Mona Hanna-Attisha, the physician who in 2015 discovered elevated lead levels in Flint children, said she tested positive but is “doing fine” at home.

Whitmer's health director set a $1,000 fine for people or businesses that violate the governor's stay-at-home order or are caught operating businesses that aren't considered essential.

“We know that people who are out there and congregating and flouting the order are putting others at risk. ... The less congregating that you're doing, you can’t spread the virus,” Whitmer said during an appearance with Detroit-area TV stations.

Henry Ford this week said hydroxychloroquine, an anti-malaria drug, has been effective in treating seriously ill people who have been admitted to its hospitals with COVID-19.

Los Angeles Mayor Eric Garcetti has recommended that his city's 4 million residents wear masks, saying even a “tucked-in bandanna” could slow the spread of the virus and remind people to keep their distance from each other. Khaldun said Michigan residents should “strongly consider” it, though N95 or surgical masks should be donated to hospitals.

“We know that some people may have a mask at home or they may be able to make a mask out of cloth or a bandana. It certainly won't cause any harm,” she said.

Detroit-based Rocket Mortgage and the Rock Family of Companies said Thursday that it was working with private and public organizations to manufacture and distribute masks, gowns, face shields and other equipment needed by hospitals, health professionals and government agencies as they battle the pandemic.

An earlier version of this story was corrected to reflect that the information about Brenda Jones' virus came from her congressional campaign, not her re-election campaign.