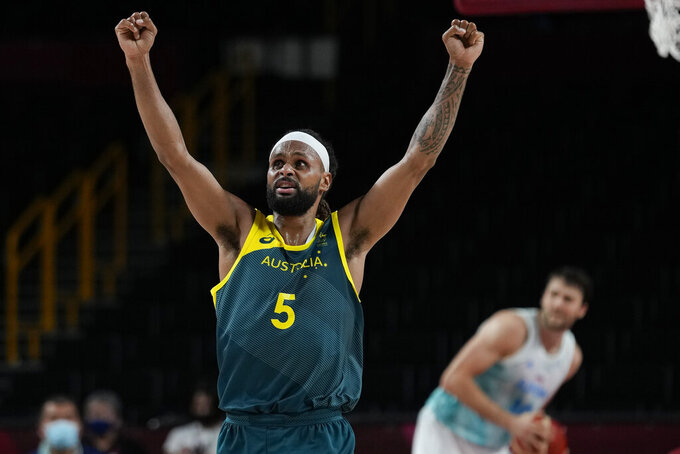 SAITAMA, Japan (AP) — Patty Mills and Joe Ingles stood at center court locked in a long embrace, looking as if they might never let go.

Eventually they had to move along, because the Australians had somewhere to be.

For the first time in their country's history, they had a reservation booked on the Olympic men's basketball medal platform. Mills scored 42 points to carry Australia to the bronze with a 107-93 victory over Slovenia on Saturday.

“We’ve been through a lot together, on the court, off the court,” Mills said. “It’s all paid off.”

He and Ingles had their arms around each other again a few minutes later — after Ingles hung the bronze medal around his teammate's neck.

“There was no doubt in my mind going into this that he was going to bring it home for us,” Ingles said.

Mills, the team captain and emotional leader of a veteran core that knew its time had to be now after so much heartbreak, shared hugs with teammates in a postgame celebration that finally came after four fourth-place finishes.

Ingles added 16 points for the Australians, who were fourth in 2016 but couldn't be denied this time.

Luka Doncic had 22 points, eight rebounds and seven assists, but committed seven turnovers as Slovenia dropped its second straight after winning its first 17 games in competition with Doncic in uniform.

He said he was disappointed in the way he played but proud of the performance of his team, which earned its Olympic spot by winning a qualifying tournament in Lithuania last month.

In its first Olympics, Slovenia cut a 14-point deficit in the fourth quarter to 83-80 when Doncic hit a 3-pointer with 6:18 remaining.

But the Australians, who couldn’t hold a 15-point lead against the U.S. in the semifinals, wouldn’t let this one get away. They scored seven straight to push it back to double digits, then blew it open down the stretch.

They finished it off in front of the U.S. and France, who came back to Saitama Super Arena during the game for the medal ceremony after the Americans beat the French 87-82 earlier Saturday.

It was a ceremony that Mills desperately wanted the Australians to be a part of this time. He refused to talk about his own NBA future, even after agreeing to sign with the Brooklyn Nets during the week, because he insisted his team stay locked in on only one goal.

Mills scored 26 points in the first half, making sure there would be no lingering disappointment for Australia after a 97-78 loss to the U.S. two days earlier.

Doncic had a memorable first Olympics, having come into the game averaging 24.2 points, 10 rebounds and 10 assists. He scored 48 points in Slovenia’s opener, tied for second-most in the Olympics by a men’s player, and had just the third triple-double in men’s Olympic history when he finished with 16 points, 10 rebounds and 18 assists against France in the semifinals.

But the Slovenians couldn’t pull that game out, falling 90-89 when Nicolas Batum blocked Klemen Prepelic’s drive with 2.4 seconds left. They tried to put that behind them to add an Olympic bronze to their 2017 European championship, but Mills and the Australians were just too good and too determined.

“I think we were mentally and physically exhausted from our semifinal game,” Slovenia's Mike Tobey said. “Unfortunately, I don’t think we had enough left in the tank for today.”

The most recent failure may have been the cruelest for the Aussies, an 89-88 loss to Spain in Rio when Sergio Rodriguez made two free throws with 5.4 seconds left after Mills was called for a foul on what appeared little or no contact.

Mills wouldn't let this one be close enough for a repeat.

He scored 10 points during a 17-4 surge that gave the Australians a 45-35 lead and at points seemed to be targeting Doncic, calling teammates over to set a pick so the Dallas Mavericks star would have to switch onto him.

Doncic couldn't stop him and neither could his teammates, and Doncic was noticeably frustrated throughout the game.

Wearing a covering over the left forearm or wrist he hurt in the semifinals, he frequently questioned officials' calls, putting himself out of position to get back on defense.

Doncic said the emotions came from the Slovenians’ desire to deliver a medal to their fans.

“This is not the way I should behave,” Doncic said. “I’ve got to learn from that.”