Nearly out of event, US earns bronze in 4x400 mixed relay 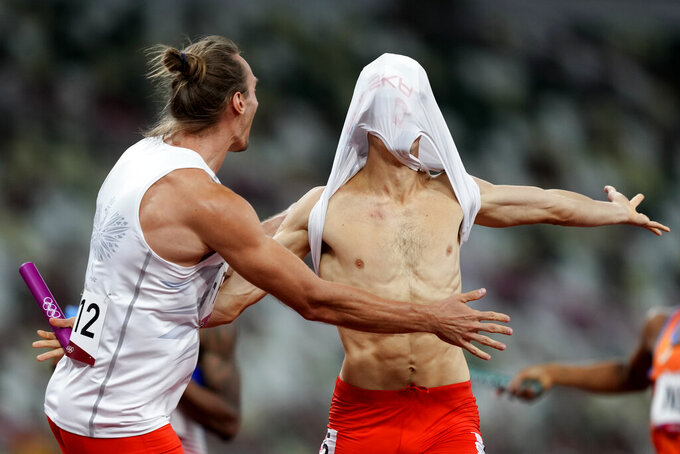 TOKYO (AP) — The American lineup for the 4x400 mixed relay was rather unexpected — no Allyson Felix.

The color of Olympic medal, too — bronze.

Given their whirlwind of emotions — disqualification in the opening round for an exchange, appeal, late-night reinstatement into the final — any medal was cause for celebration.

The United States wound up behind gold medal-winning Poland and runner-up Dominican Republic as the mixed relay made its Olympic debut Saturday night at the Tokyo Games.

From start of the event to the finish, it was a wild ride for the Americans.

“We had to keep the faith,” anchor leg Vernon Norwood said. “We all feel kind of satisfied, walking away having a chance to compete. That was the thing we were looking forward to most. We ended up getting our joy back and ended up with some hardware.”

The U.S. was disqualified for a bad exchange in the opening round Friday. The Dominican Republic also had been disqualified. Both were reinstated hours after the race.

On Saturday, no one could catch Poland. The real race was for second, with Alexander Ogando falling over the line to give the Dominicans the silver by .01 seconds.

There was some thought Felix might be on the track for the final with a chance to win her record 10th Olympic medal. It will have to wait.

She combined with Wil London, Courtney Okolo and Michael Cherry to take home gold when the event made its major meet debut at the 2019 world championships in Doha.

Instead, the Americans went with a young lineup of Trevor Stewart (24 years old), Kendall Ellis (25), Kaylin Whitney (23) and Norwood, the elder statesman at 29.

“Did the best to come away with the bronze,” Norwood said. “Give a lot of credit to the team here and the team that ran before us to give us the opportunity.”

That squad was in the stadium, too. They congratulated each other.

“They were happy for the medal we all earned,” Ellis said. “They got us here. It’s as much their medal as it is ours. It’s the eight-team group of us. We all earned this medal together. I’m thankful for them going out and setting the tone yesterday.”

“Such a great feeling,” Duszynski said.

An intriguing race for sure, which features teams of two men and two women competing against each other in any order.

“Both genders in there, you can see every country’s wide showcase of talent together," Whitney said. "It just adds more excitement.”